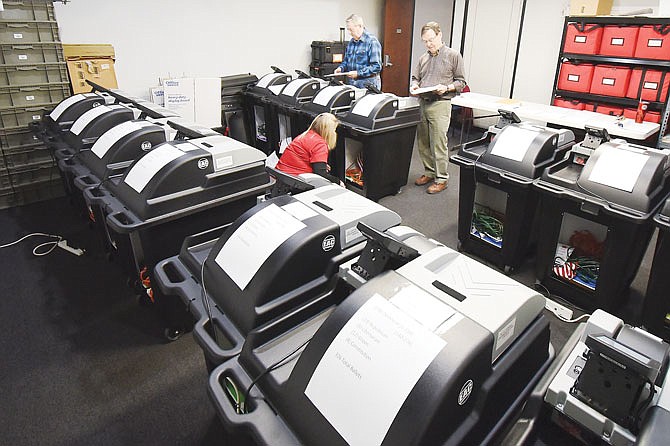 Using a sample ballot, Greg Schildmeyer, background right, and Roger Scrivner insert test ballots into the reader Feb. 27, 2020. Cole County Clerk's office staff, including Dawn Cremeans, pick up the ballots and verify that each records the information accurately and counts them to make sure totals match.

With Missouri's presidential primary 12 days away, Cole County's voting machines were being put through their paces in a test run.

Cole County Clerk Steve Korsmeyer, who oversaw the testing Thursday, said he is predicting a 30 percent turnout March 10 for the presidential primary. There was a 40 percent Cole County voter turnout in the 2016 primary election.

As part of the testing, which is monitored by representatives of the local Democrat and Republican parties, the ballots are put into the machines backward and upside down to make sure the machines accurately read them.

As in all primary elections, voters may take only one party's ballot. Missouri voters' choices help determine how delegates vote at the parties' national conventions, where the final candidates are chosen.

The Libertarian candidate is Jacob Hornberger.

The candidates for the Constitution Party are: Don J. Grundmann and Don Blankenship.

Absentee voting will continue until 5 p.m. March 9 in the clerk's office, located in the County Courthouse Annex on High Street. For more information about voter registration and elections in Cole County, call the county clerk's office at 573-634-9101.