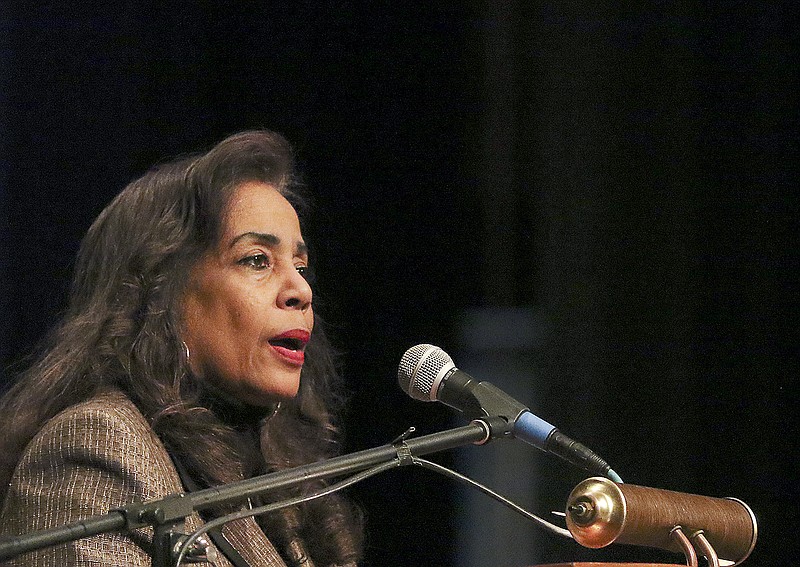 Lynne M. Jackson, the great-great-granddaughter of Dred Scott, of the Dred Scott v. Sandford Supreme Court case, speaks to a crowd Tuesday at the Richardson Fine Arts Center on Lincoln University's campus. Jackson is the president and founder of the Dred Scott Heritage Foundation.

The great-great-granddaughter of a now-famous former slave spoke on the Lincoln University campus Tuesday night about the work she's doing to preserve her ancestor's legacy and promote reconciliation between ancestors of slaves and slave owners.

Lynne Jackson, president and founder of the Dred Scott Heritage Foundation, is the great-great-granddaughter of Dred and Harriet Scott, former slaves who sued for their freedom after living with their owners for some time in the free state of Illinois and what was then the Wisconsin territory, where slavery had been prohibited by the Missouri Compromise of 1820, according to the Dred Scott Heritage Foundation website.

Dred Scott is now the namesake of a famous United States Supreme Court case from 1857. The controversial decision of the Supreme Court eventually determined the Scotts would remain slaves, and also had the larger impact of declaring the Missouri Compromise of 1820 unconstitutional because of personal property rights - because slaves were considered property, their owners were allowed to take them wherever they chose without threat of losing them - and the federal government didn't have the right to prohibit slavery in new territories.

Reaction to the decision was polarizing, leading the new, anti-slavery Republican Party to fight for more control in Congress, which ultimately led to the election of President Abraham Lincoln and the secession of South Carolina from the Union. The Dred Scott decision is often credited as the moment that moved the country to the brink of the Civil War, which began in 1861.

Ironically, the Scott family was returned to Dred Scott's original owners, the Blows, after the case was over. The Blows gave the Scotts their freedom on May 26, 1857, despite the ultimate outcome of the case. After 18 months of freedom, Dred Scott died in September 1858 and was buried in St. Louis.

Jackson said she grew up always knowing the Scotts were her ancestors.

"I'm very proud to be their great-great-granddaughter and very blessed to have been tapped on the shoulder to continue their legacy," Jackson said.

In 2007, two years before the 150-year anniversary of the decision, Jackson decided to start the Dred Scott Heritage Foundation with the goal of educating the public on the impact of the decision and the Scotts' struggle through commemoration, education and reconciliation.

One of the first steps was commemoration. Jackson realized there was no statue in existence of Dred Scott, despite his impact in the country.

In 2010, the foundation began a campaign to erect a statue of Dred and Harriet Scott. On June 8, 2012, a life-size statue of the couple was dedicated in front of the Old St. Louis County Courthouse where the Scotts' case began in 1846.

Jackson believed the foundation should also be educational. The foundation's website includes all the history about Dred and Harriet Scott, as well as the landmark case that made their name famous. Jackson also speaks at events across the country about her ancestor and her foundation.

The third purpose of the foundation is reconciliation. Jackson said she knew this from the beginning, but wasn't sure what it would look like.

"I had a goal to one day meet other descendants of famous people, and put us together as a group, and I was going to call it 'Sons and Daughter of Reconciliation,' but I didn't know anybody," Jackson said.

"By just virtue of knowing these few people, I started the sons and daughters group," Jackson said. "It has grown and grown."

The group now includes descendants from other landmark Supreme Court cases including Plessy v. Ferguson and Brown v. Board of Education, and of Thomas Jefferson and Sally Hemmings, one of his slaves.

One of the families Jackson was most eager to meet were the descendants of Supreme Court Chief Justice Roger Taney, who wrote the majority opinion in the Dred Scott case.

"Chief Justice Taney is kind of like the bad guy," Jackson said. "I thought it would probably take a couple of years if I ever found them for them to come and say yes. As it turns out, they found me."

One of Taney's descendants, Kate Taney Billingsley, was working on a play at the time called "A Man of His Time" which centered around fictional descendants of Scott and Taney meeting in a coffee shop.

"So the irony of all of that is they found me and I met them about a play about us meeting as descendants," Jackson said. "I am connected now with the Taney family and we are on the road now, as it were. It really gives us hope."

On the 160th anniversary of the decision, Charlie Taney, the great-great-great-nephew of Roger Taney, publicly apologized for the decision on behalf of his ancestor.

"That was one of things that I think was one of the highlights," Jackson said. "He apologized for what his family did to hurt African Americans and this country. They own it."

She said it is a lot of work, but it's very rewarding.

Jackson said she doesn't know what the end of the story looks like for the foundation.

"Ultimately, I would like to see people respect each other as human beings and understand that the color of our skin doesn't mean anything," Jackson said.

Jackson also met with two state representatives Steven Roberts and Mike Moon on Tuesday to thank them for their support of House Concurrent Resolution 74, which calls upon the Missouri General Assembly to condemn the Supreme Court's decision.