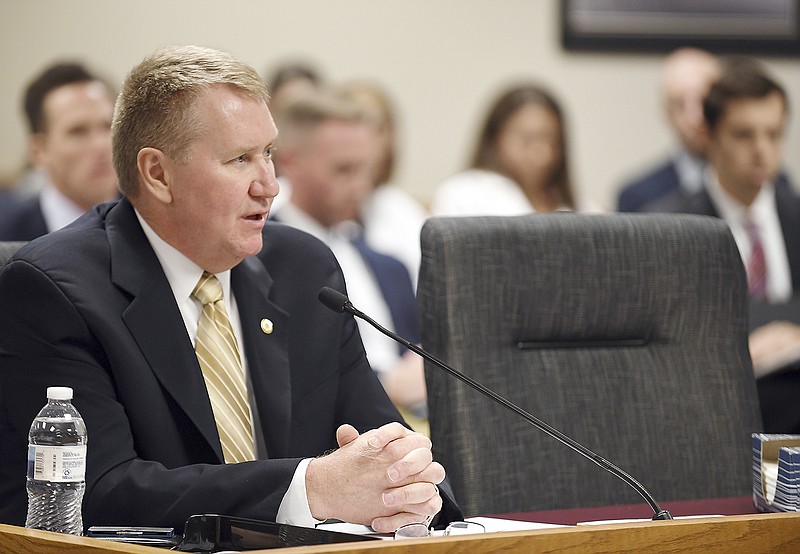 If passed, the bill would require a child determined to be eligible for MO HealthNet benefits will remain eligible for benefits for 12 months after the last day of the month in which the child was enrolled in the state Medicaid program, unless the child moves out of the state or reaches 19 years of age.

Currently, children must be re-enrolled every quarter.

"Receiving proper and timely health care is important to the health and well-being of us all," Helms told the committee. "Especially to those who are most vulnerable in society - such as the young, elderly and disabled."

The changes will help build a stronger primary-care relationship between doctors and children and will eliminate gaps in coverage caused by seasonal income fluctuations, he explained.

The bill comes on the heals of a revelation the state removed up to 60,000 children - who still qualified - from its Medicaid rolls.

Democrats, for the past year, have been expressing their concerns that about 125,000 children have been removed from the state's Medicaid program. In recent weeks, Republican leadership acknowledged about half likely should have remained in the program.

Leading up into last year, about 30,000 adults who didn't qualify for MO HealthNet were added to the program. When a new system came into place in 2018, the wrongfully added adults' families lost coverage because their parents didn't qualify in the first place.

However, because MO HealthNet for Kids provides medical care for children younger than 19 whose family makes up to 300 percent of the federal poverty level, the children still qualified. Parents just didn't know to reapply.

Expanding the length of coverage to a year would also reduce administrative costs for Missouri, Helms said.

"I believe the only reason we haven't done this to date is because of a possible high fiscal note," he said. "Like most estimations, we won't truly know the cost until full implementation and changes are made. There is a high probability that reducing the gaps in children's coverage and providing more timely care will help reduce overall expenditures."

Helms said he received the fiscal note (the estimated fiscal effect) for the bill Monday morning.

"It is quite steep, but I knew that we were going to be getting a higher fiscal note," he continued.

He added that he looks forward to looking at it more deeply.

The note estimates the cost of moving to a 12-month sign-up for children in the program would cost approximately $8.5 million for 2021 (unless lawmakers add an emergency clause to the bill, in which case it would be in effect for a longer period during the year), $26 million in 2022, and $26.5 million in 2023.

The fiscal note estimated of the 88,219 children who lost Medicaid coverage between July and October 2019, 40,139 were determined to have lost eligibility because of circumstances that would not result in loss of eligibility under the bill, said state Rep. Sarah Unsicker, D-Shrewsbury.

Unsicker pointed out that Texas proposed a similar bill, and the fiscal note there was $6 million-$8 million.

"They have more than six times as many kids enrolled in Medicaid and (Children Health Insurance Program) as we do," Unsicker said.

Most of the children who enroll in the program will be among the lowest-coverage-cost for the system, Helms said.

"At the end of the day, these are estimates, and you never truly know unless you put it into practice," he said.

Several pediatricians testified during the hearing. Maya Moody, a pediatrician who works for a Catholic Charities clinic in St. Louis, said she serves about 3,000 children. The clinic she works for doesn't accept private insurance.

"We are 100 percent Medicaid or uninsured," she explained. "Over the past 18 months, we've noticed a dramatic increase in the amount of families coming to the clinic for a routine appointment, only to find out their Medicaid is inactive."

On average, the clinic is forced to turn away two to four patients daily because of inactive Medicaid.

Her heart does not allow her to turn away a sick child, she said. So the clinic makes arrangements to see the sick children.

However, even though she sees them in the clinic, that does not mean their parents can go to a pharmacy and pick up medications or get lab tests or X-rays performed. She's seen parents decline X-rays or other procedures for their children because they are concerned about paying the bills that would follow.