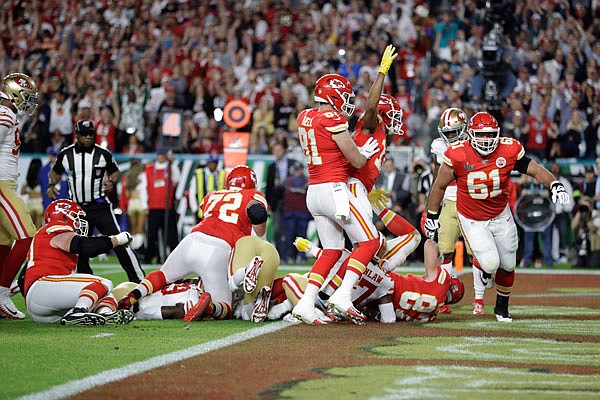 The Chiefs celebrate after scoring a touchdown against the 49ers during Super Bowl LIV in Miami Gardens, Fla.a

And if more money is involved, then it really must be better.

The NFL owners and players are talking about a new collective bargaining agreement. There's really no rush to get it done right away, with the current one not expiring until after the 2020 season.

But they, and by they I mean the owners, would like to get it done before by March 18. That's the end of the current league year.

What's the rush? They don't want to leave any potential revenue just laying around.

The owners have approved a proposal to add one regular-season game and cutting back the mostly unwatchable preseason from four games to three.

That would mean 17 games that count. But if you count, 17 is an odd number, which is an odd number to end on. I don't know why they didn't go for 18 and 2, other than head coaches would fret two games would not be enough to get ready for the season.

The proposal would increase the the players' portion of total revenue by about 1.5 percent. During what would be a 10-year agreement, that would add about $5 billion to the money paid to players, including a 25 percent hike in minimum salaries.

The owners aren't being benevolent giving away that substantial amount of money, somebody's going to pay for it.

That somebody will be the TV networks, whose contracts are soon to be up for negotiations. It's no secret ratings are falling for networks, except for live sports. And with the NFL being the ratings king when it comes to eyeballs, that means money.

How much? In one scenario from Moffett Nathanson reported by AdAge, the NFL could see an increase of up to 80 percent in its TV deals. And with ESPN currently paying $1.9 billion per year for Monday Night Football, the billions would really start to add up when you talk about what CBS, Fox and NBC would then be kicking in.

Live sports are really the last bastion of making sure people are watching your network. And watching your promos for your other shows.

This isn't a done deal, some prominent players are already trying to slow the train of a quick approval. There are still some to work out, like relaxing the drug policy when it comes to marijuana and trying to figure out how to pay players under old contracts for that 17th game.

But in the end, you can figure the NFL will lose a preseason game while adding a 17th regular season game starting with the 2021 season. And the opening weekend of the postseason will have three games Saturday and three more Sunday next January, with only the No. 1 seed in each conference getting a bye.

Once again, it's thanks to the money.