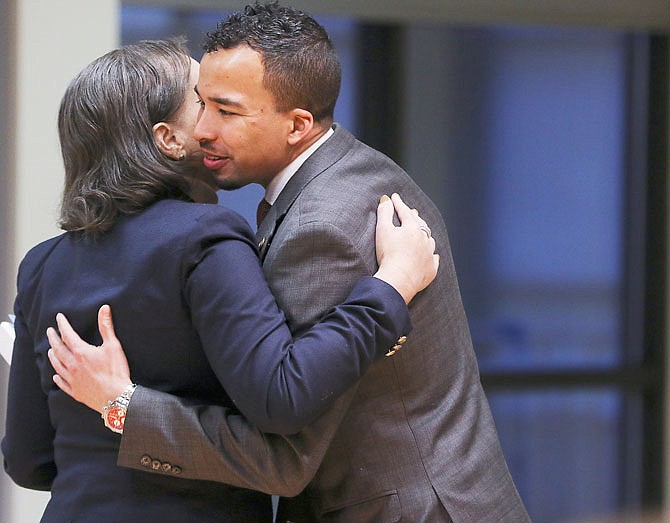 America is a land of contradictions, but there's hope to be found in them, according to the latest speaker in Lincoln University's Presidential Lecture Series.

Wednesday night's lecture was the first of 2020 and celebrated Black History Month.

A fulfilled dream is the antithesis of a deferred dream - the latter being what American poet and Harlem Renaissance figure Langston Hughes wrote about in his poem "Harlem," which famously asked "What happens to a dream deferred?" in its opening and ends by asking if a dream deferred explodes.

After the killing of Michael Brown by a Ferguson police officer in 2014 - which was followed by protests, violence and national discussions about racism and police accountability and tactics - Roberts decided to serve as a prosecutor for the City of St. Louis, where he thought he could make a difference in his native home city.

In law school, he had been a legislative intern in Congress, a law clerk for the District Attorney's Office in Compton, California and had worked with the Counsel of Secure Justice to help victims of sexual assault in New Delhi, India.

He's also a second lieutenant in the Air National Guard.

He said he prosecuted more than 100 cases in St. Louis, from minor offenses to homicides.

In contrast to his experiences working with prosecutors in Compton, in St. Louis "we were throwing the book at everyone," and he also saw laws being "unequally enforced," punishing the poor and marginalized.

That led him to try to fight for change through the Legislature. He was elected in November 2017, and represents areas of St. Louis from the southeast corner of Forest Park northeast through the Central West End, Vandeventer, Ville and College Hill neighborhoods to the Near North Riverfront area.

He has sponsored legislation this session that seeks to protect seniors from gentrification, denounce the Dred Scott decision, make it a crime to openly or concealed carry a firearm in St. Louis without a concealed carry permit, and protect persons who report alleged crimes to a crime stoppers organization.

Dreaming in America involves "a lot of cognitive dissonance," Roberts said - contradictions of wealth and poverty, of "land of the free, built by slaves," of suffering and persecution matched by perseverance and strength.

We are called to dream, yet silenced in the same breath, he said.

However, "What can we do, but embrace the contradiction?" he posited.

"Education is a sharp weapon that never gets lost or stolen," he said.

The president and chief executive officer of the NAACP was the first scheduled speaker last year in this series at LU. Other speakers in the series have included a former deputy national security advisor for President Donald Trump and the senior adviser for former Vice President Joe Biden's 2020 presidential campaign.

It was announced Wednesday night the next speaker in the series will deliver their lecture in April.