'Moms' lobby for support of laws to disrupt domestic violence 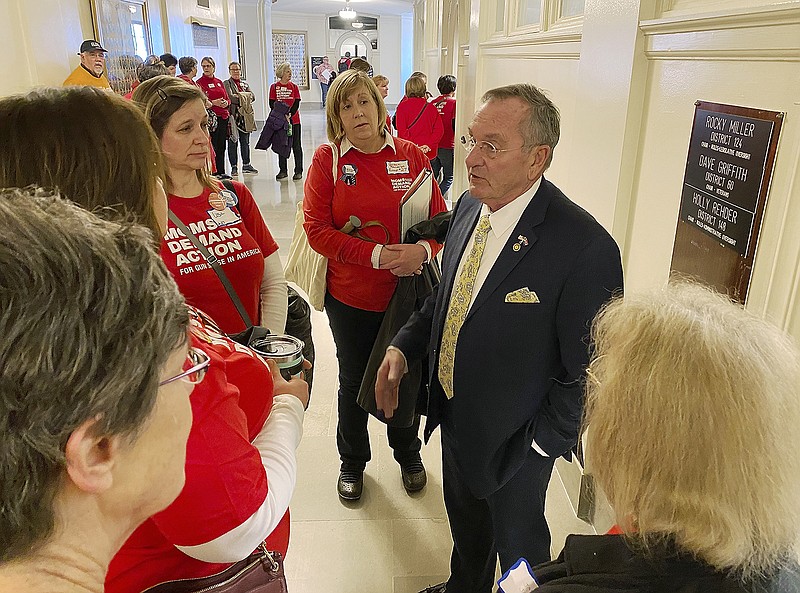 Rep. Dave Griffith, R-Jefferson City, stopped outside his Capitol office Tuesday to hear concerns from members of the Moms Demand Action group who were in the Capitol to advocate for legislation to limit gun violence in domestic abuse cases.

Clad in bright red shirts, supporters of Moms Demand Action for Gun Sense in America fanned out across the Missouri Capitol on Tuesday to urge lawmakers to consider four bills this session.

The bills are intended to limit gun violence that occurs during domestic abuse cases.

"Being a good neighbor and citizen means doing what I can to prevent gun violence," speakers told listeners.

More than 600 people from all parts of Missouri committed to attend the annual effort. Equipped with data, volunteers went office to office within the Capitol to ask the lawmakers to support legislation that would limit access to firearms for people accused of domestic violence.

Susan Randolph, a volunteer and Jefferson City resident, said the group is focusing on getting firearms out of the hands of abusers in Missouri.

"A domestic abuser who wants to get his hands on a gun will (be stopped) if he goes to a gun shop - because of federal regulations," Randolph said, adding that abuser will then seek alternative sources. "So they go to gun shows and (private) gun sales."

Moms Demand Action has been working with Republicans to fix loopholes in gun legislation, she continued.

It is against federal law for anyone who has been convicted of domestic violence to purchase or own a firearm.

HB 1260 has not been assigned to a House committee. SB 697 is assigned to the Senate Transportation, Infrastructure and Public Safety Committee.

Mary Chen, of Jefferson City, said the group also hopes to prevent people who have protective orders issued against them from having access to firearms.

House Bill 2131, which also has not been assigned to committee, sponsored by Sen. Doug Beck, D-St. Louis, and Senate Bill 563, sponsored by Sen. Jill Schupp, D-St. Louis County, would make it illegal for someone facing a protective order from buying or possession firearms. That bill also has been assigned to the Senate Transportation, Infrastructure and Public Safety Committee.

Small groups of constituents stood outside lawmakers' doors awaiting their chance to speak with their representatives Tuesday.

Although late for a hearing, Rep. Rudy Veit, R-Wardsville, invited five members of the nonprofit organization into his office to discuss their concerns.

"Women who are in domestic abuse situations whose partner has a gun - they're five times more likely to be shot and killed," Chen told Veit as they crowded into his office. "That's our top concern."

Statistics show violent partners shot and killed more than 50 women in Missouri in 2018, group members told Veit. They also pointed out police officers are four times more likely to be killed while responding to a domestic violence call than all other calls.

"What we're really wanting to do is ask our Missouri lawmakers to focus on a bill that could be helpful and lower gun violence in Missouri," Randolph said.

She encouraged Veit to support the House bills.

A lot of the problems are easier to consider than they are to solve, Veit said.

Lawmakers get pressure concerning gun rights from all sides, people on the opposite side of the aisle and even their own party, he continued.

"That should be a school board decision - not my decision. I don't believe that I (know more than) the school board," he said. "The difference is that you may want to have a gun in St. Elizabeth, Missouri, where deputy sheriffs can't get there for a half-hour or an hour."

That scenario would be different "right here in Jeff City," where law enforcement can arrive in moments, he continued.

"Those decisions, I believe, should be for the school board," Veit said.

The group agrees with Veit, Chen said. Many within Moms Demand Action are gun owners themselves. However, they are deeply concerned about domestic violence.

Neither the Legislature nor law enforcement may be the resource that can separate a suspected domestic abuser from his or her firearms, but a family member could, Rep. Dave Griffith, R-Jefferson City, told the women outside his office.

"Unfortunately, not everybody has a responsible brother to go retrieve a gun in a desperate situation," Chen said. "Our main concern is protecting women and children. We hope that you give that some more thought."

The access to firearms also poses a danger of suicides, Griffith told them.

Lawmakers can't legislate good behavior, he said. However, as citizens, we can take individual steps to try to prevent tragedies.

He talked about a RACS client who returned to her abuser and ended up dead in six months.

"Breaking that cycle is really the hard part," Griffith said.

Randolph said, in much the same way the state takes away a person's driver's license if they drink and drive, bills in the Legislature would remove someone's privilege to own or possess a firearm if they break a law.