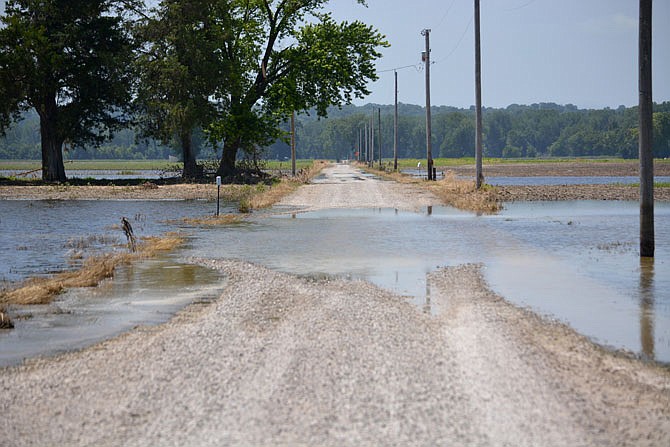 There's not yet certainty of whether the Missouri River will disastrously flood again this spring, but the forecast is foreboding enough that the U.S. Army Corps of Engineers' chief who manages the Missouri River basin warned Monday that changes in releases from Gavins Point Dam may happen before the public receives immediate notice from the Corps.

Missouri's Flood Recovery Advisory Working Group met Monday and heard updates on the status of levee repairs following last year's extensive flooding, as well as the outlook for Missouri River operations and the weather this spring.

"Everything we're asking for, we're getting," when it comes to funding for levee repairs, said Jud Kneuvean, chief of emergency management with the Corps' Kansas City District.

There are 119 requests for levee repair assistance in the district, and of those, 61 so far have been approved, he added.

The solicitation for bids is advertised for 30 days, after which it takes a further five to 10 days to award a bid before construction work can start, he said.

That means it will be mid-March when construction could start on the Mokane levee, he said.

Repair work for the Capitol View and other local levees, including Tebbetts and Wainwright, are in solicitation, Kneuvean said.

Federal officials expect many levees will not be repaired prior to this spring.

Kneuvean said a lot of people are doing temporary repairs on levees, and the Corps is working to verify that work and the amounts of protection offered by it to communicate to the U.S. Department of Agriculture's Risk Management Agency.

While authorities work on the Missouri River's banks to repair breached or damaged levees, what the river itself will do in spring largely depends on conditions in the upper basin - how cold the rest of winter is and how much more precipitation falls, said Kevin Low, a National Weather Service hydrologist with the Missouri River Basin Forecast Center.

The past two, three and five years have been the wettest such periods on the 125-year record, Low said, adding 2019 was the third wettest year on record, behind 1993 and 1915.

All that precipitation has left soil moisture levels and streamflows higher than they were this time last year. Mountain snowpack is, so far, about average, while snowpack on the plains is about what it was last year.

"People should sit up and take notice" of the fairly high amount of snowpack on the plains, even though the ground is not as frozen as it was this time last year, Low said.

Much of that snow has fallen on the plains of eastern North and South Dakota, where, when it melts, runoff will drain into rivers that empty into the Missouri below Gavins Point, John Remus said - meaning the Corps won't have control over that water.

Remus, chief of the Corps' Missouri River Basin Water Management Division, said it's not time to panic, but to plan and stay informed.

A lot of how the river will behave in spring also depends on how fast rain falls and the snowpack melts, he said.

However, given the volatility in the forecast - the runoff for the upper basin in 2020 is anticipated to be the ninth highest on record - Remus said, "I think we're going to be walking kind of a tightrope."

He anticipates a lot of changes in the amount of water being released from Gavins Point, and he encouraged people to stay informed through the National Weather Service because the Corps may not always be able to get word out before having to make changes in the releases.

For now, Remus said 98 percent or more of the system's flood storage capacity is open.

Low said the forecast for the upper basin over the next three months projects below-average temperatures and above-average precipitation.

Neither of those projections are favorable for avoiding a flood because colder temperatures that further freeze the ground prevent more water from being absorbed by the soil, which would slow how much enters rivers at once as runoff.

Low said a below-normal precipitation year is needed "to get out unscathed in 2020."