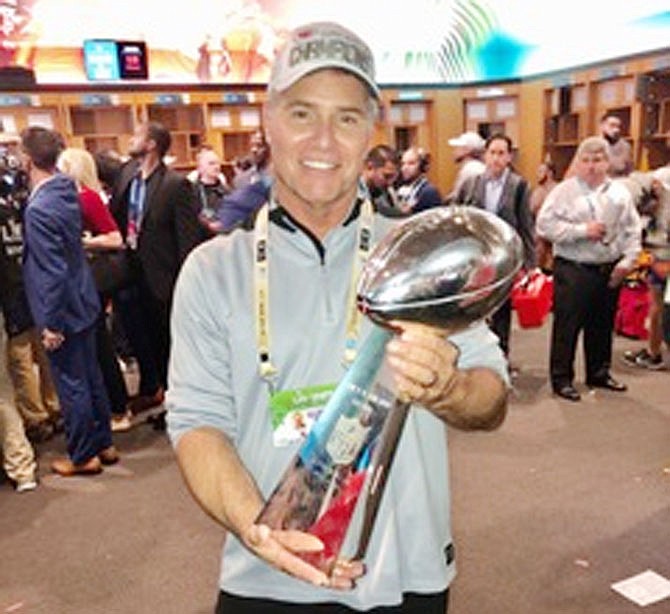 Dr. Michael Monaco wasn't sure he would experience a Super Bowl win during his career as the head doctor for the Kansas City Chiefs. But the former Jefferson City football player's dream came true Feb. 2 when the Chiefs took home the Lombardi Trophy at Super Bowl LIV.

Monaco, 58, has come a long way since playing fullback and linebacker for the Jefferson City Jays in the 1970s, under the direction of former head coach Pete Adkins.

The former Jefferson City resident has served as the head medical team doctor for the Kansas City Chiefs for about 25 years.

"There's a lot of satisfaction in being able to say that I played a role in getting this team prepared to be champions," he said.

After some errors in the third quarter, Monaco said he was uncertain whether the Chiefs would win the Super Bowl. The Chiefs quickly turned the game around in the fourth quarter though, beating the San Francisco 49ers 31-20 and breaking the Missouri team's 50-year drought.

"When we realized we were going to win the Super Bowl, there was a brief moment where I was a little teary-eyed," Monaco said.

He celebrated the win with the Chiefs but also made time for his family, who was in the Super Bowl audience at Hard Rock Stadium in Miami Gardens, Florida.

As the primary medical doctor for the Chiefs, Monaco ensures the players are healthy enough to be on the field and do strenuous activities without hurting themselves. He and his medical team handle severe injuries such as concussions, as well as pre-participation examinations and general medical illnesses like influenza.

Along with working closely with the team's athletic trainers and educating players about healthy lifestyles, Monaco also reviews the medical histories on potential draft players.

Working for the Kansas City Chiefs was not always on Monaco's radar.

About five years after graduating from the University of Missouri-Kansas City School of Medicine in 1987, the Chiefs offered Monaco a job. But the young doctor declined the proposal due to other responsibilities. When the offer returned before the 1995 season, he happily accepted the position as head medicine team doctor for the Chiefs.

"That first year or two, standing on the sidelines in what we now know is the loudest stadium in the NFL is pretty surreal," he said. "In those first two years, you're almost awestruck when you're there and everybody around you is screaming and hollering."

Now going into his 26th year with the Chiefs, Monaco remembers being a young boy when the football team won its first Super Bowl in 1970. On Wednesday, he sat with several Chiefs Hall of Famers like Jan Stenerud, Johnny Robinson, Will Shields and Bobby Bell during the parade in Kansas City.

Seeing a sea of red at the parade and hearing the deafening cheers from the fans was an overwhelming experience, Monaco said, and one he will never forget.

"They made me feel like I was actually a player because everyone was waving and smiling, thanking us and doing the tomahawk chop or waving posters," he said. "It was one of the most remarkable things I have ever experienced, and to think I was on that side of it was pretty incredible."

As part of the Chiefs' big win, Monaco will receive a Super Bowl ring later this year.

"It won't seem real until it gets on my finger and I realize it's mine, and I can take it home with me," he said. "It kind of marks that moment in time when we were the best in the world in football."

He joked his father, Nick Monaco, a Jefferson City attorney, is eagerly waiting to see the prized ring.

Nick said there are no words to describe how proud he is of his son.

"He just demonstrates the type of young man this community can foster," Nick said.

Like many others, Monaco hopes this won't be the Chiefs' last Super Bowl win.

"I'm hoping it's just going to be a year or two until we're back at it. But if it isn't, we can at least take this away," he said. "We were the best and right now, we are the best. That's a tremendous feeling."

Going from a teenage boy in a jersey and helmet to the head medical team doctor of Super Bowl champions has been a whirlwind, Monaco said.

He added he wouldn't have made that journey if it hadn't been for his experiences in Jefferson City.