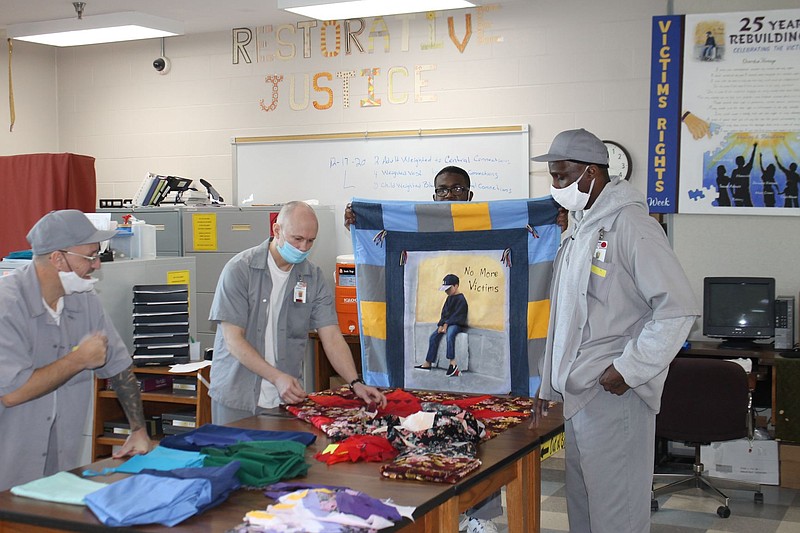 While its classes have been on hold for most the year because of the COVID-19 pandemic, a restorative justice group at Jefferson City Correctional Center has still been able to continue a tradition of quilting to serve Mid-Missouri needs and begin to make amends.

There's more to stitching and healing past wrongs than sewing some fabric together, of course, but Kevin Yancey, coordinator for the JCCC restorative justice program, said: "The quilts are a physical way for the offenders to make amends to the community for their crimes, so it is a vital part of the change that is necessary when these men return to society."

Yancey said, "When you hear about rehabilitation in prisons, that is what restorative justice is. The purpose of restorative justice is to help give the offenders some perspective on just how much of an impact their crime(s) have on not only their victims, but their own families and communities.

"We do this as a means of having them recognize their criminal behaviors and that the impact of their crimes extends much further than just their victim. Many of our programs are designed to help change the cognitive behavior of the offender in a positive environment," he said.

"Our organization has 10 workers who help with making the blankets (quilts, too) and 12 facilitators who assist in teaching the programming. This represents about 1 percent of the offender population at JCCC," Yancey said.

In order to work for the program, Yancey said offenders must complete an eight-week Impact of Crime on Victims class.

The first seven weeks cover the impact of criminal thinking; positive decision making and goal setting; domestic violence ("batterers intervention"); building healthy relationships (including anger control); critical thinking skills (how to recognize the triggers for criminal behavior and how to then change that); how gangs negatively influence young minds and lead to unhealthy decisions; and life skills such as budgeting, computer skills and how to interview.

The last week of class has victims of crime from the community share their stories about how violence changed their lives.

Offenders in the program are also connected to communities through their quilting, which Yancey said has been done for years.

The organization recently donated more than 100 blankets and quilts to the Rainbow House children's shelter in Columbia, including four weighted blankets to help soothe anxiety.

Yancey said the program also makes weighted blankets, made-to-order, for children and adults with autism and anxiety disorders that many nonprofits work with, but primarily for the Jefferson City-based nonprofit case management agency Central Connections, as well as the Department of Mental Health.

Yancey said, "We also create fidget blankets for the elderly with Alzheimer's and weighted fidget quilts for surrounding county prosecutor's offices to help children who are testifying.

"In addition to the blankets, we operate a vegetable garden in the summer to donate to local food banks, soup kitchens and food pantries. This past summer, we donated almost 6,000 pounds to help feed families in our local communities," he said.

However, the work does not just benefit communities.

"The men who work in the organization have felt the need for change, and this gives them a very positive and encouraging outlet to keep with their change. Criminality is an addiction in itself, so these men are in a constant battle to feed that addiction. By staying positive and seeing the effect that their blankets have with children and adults in need really helps them and makes them feel good about themselves," Yancey said.

"Restorative justice is a way of life for them, and they learn to be responsible. I always tell them that they live in a 'glass house,' which means that how they behave when they aren't at work reflects on restorative justice. They have been working very hard to remain violation free inside the institution and live responsibly. While they do not sew on their own time, they try to mentor the younger men who come in and be positive role-models. If they can, they attempt to put them in some of the programming to help them spend their time in prison productively," he added.

Yancey said every prison in the state has a restorative justice program, and many also make different products for nonprofit organizations, and teach the same classes.

The pandemic has complicated things: "We do still work as a group with making the blankets, as we are able to socially distance and we wear masks during our time. Unfortunately, our classes have been on hold because of COVID for most of the year. We have had a few classes available, but with smaller socially distanced groups," Yancey said.

"The opportunity to be the coordinator for such an important organization has been a blessing. We, as staff, have an investment in these offenders. Most of these men will get out of prison at some point, and they may move next door to me or you. I want to know and (want) my community to know that I've done everything I can to give these men the proper tools to succeed when they get out," he said.