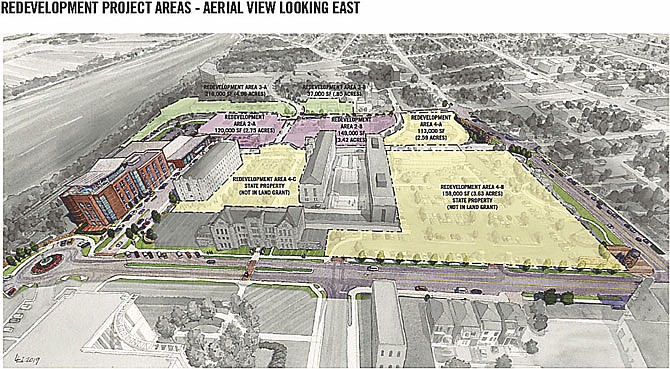 An artist's rendering for the Missouri State Penitentiary redevelopment project shows the layout of the new space. (Published Dec. 27, 2020)

While city staff works to finalize a development agreement for Missouri State Penitentiary, the number of players in the chosen development team has grown.

The Jefferson City council selected a developer for the project in June - a team of companies from the St. Louis area including Chesterfield Hotels, architecture firm Arcturis, Peckham Architecture and Central Missouri Professional Services. The group was chosen over locally-based Farmer Companies.

Since then, the group has announced the addition of general contractor Paric Corporation, also based in St. Louis.

While some of the companies will be working together for the first time, others have completed many projects together and bring experience on similar projects.

David Parmley, owner of Chesterfield Hotels, said Arcturis and Peckham Architecture were in discussions about the project after the city released the request for qualifications in the spring of 2019.

Parmley knew Nick Peckham from a previous project, and the two companies approached Parmley about joining the team to help develop the hotel and conference center portion of the project.

The team then brought in Jefferson City-based Central Missouri Professional Services because of their previous experience with the MSP site. That four-company team created the proposal that was eventually presented and chosen by the Jefferson City Council.

The group's proposal is to transform the approximately 30-acre property at MSP into a multi-use space with a hotel and conference center at the heart. Other proposed elements include office space, a two-sheet ice arena, retail, housing and other multi-use buildings.

Chesterfield has served as an over-arching organizer of the project and will continue to do so, Parmley said, but their primary focus will be on the hotel and conference center.

"We want to make sure things get developed around the hotel, things that will hopefully generate business for the hotel, like the hockey rink," Parmley said.

Once the hotel and conference center are built, Chesterfield's management company will manage both, as they have done with their previous hotels.

Although this will be Chesterfield's first project in Jefferson City, the company has completed two hotels in Columbia - a Hampton Inn & Suites and The Broadway Hotel.

While this is the first project where Chesterfield and Arcturis will partner, Chesterfield Hotels has previously worked with the Paric Corporation.

During the Dec. 7 meeting of the City Council, Parmley announced Paric Corporation had joined the project as the general contractor.

Todd Goodrich, vice president of business development for Paric, gave a presentation to the council about the company and their past projects.

Paric Corporation is a general contracting company that also provides construction management and large-scale master planning services. It was established in St. Louis in 1979 and continues to operate its main headquarters there.

During the council meeting, Goodrich told the council Paric has a different approach to projects. Typically, an owner would hire an architect and designer, create plans and then hire a general contractor.

"What we've learned is there are better ways to do it," Goodrich said. "We can bring different value to our clients by getting involved earlier and collaborating with the team to put our knowledge to work with theirs and ultimately develop a better, smarter project with more certainty."

Parmley said Paric is a great addition to the team based on the scope of the project.

"We thought all along it would be helpful to bring somebody that has more of a construction background for building stuff out and delivering turn-key packages," he said. "The city is looking for turn-key development here, and that's something Paric can bring to the table."

One of Paric's most noteworthy projects is Ballpark Village - a commercial, hospitality and entertainment space constructed near Busch Stadium in 2014.

Paric served as construction manager for the first phase of development - a $100 million, 100,000-square-foot project which included a restaurant, the Cardinals Hall of Fame Museum and Anheuser-Busch's Budweiser Brew House.

The $260 million second phase of the project began in 2018 and included another 700,000 square feet of development.

Parmley said this experience will be helpful as the proposed plan includes a two-sheet ice arena that was a very popular idea with the community.

The MSP project will not be the first time Paric has worked with Chesterfield Hotels or Arcturis.

Parmley said Paric is also working on a proposal for a planned second tower at The Broadway Hotel in Columbia - a $23 million project.

Goodrich said the company has completed close to 100 projects with Arcturis in the past.

City Attorney Ryan Moehlman said  the city staff is still working on finalizing the development agreement with the group. The process was delayed by health issues affecting a key person in the team and effects on the hospitality market from the COVID-19 pandemic.

Originally, the council set a Dec. 31, 2020, deadline for the agreement to be completed. That deadline was extended earlier this month until Dec. 31, 2021. The state-imposed deadline to break ground on the project is July 2022.