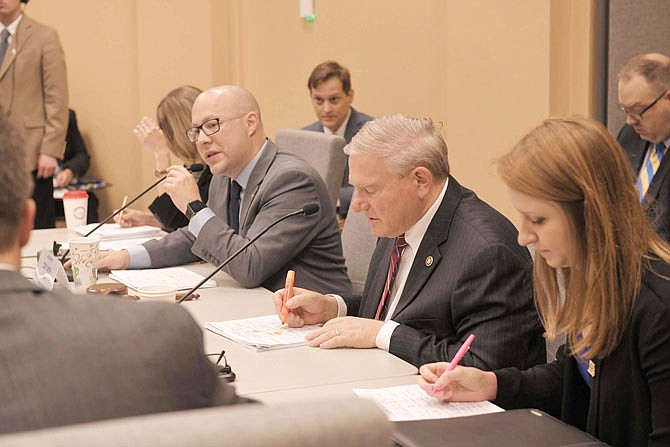 The Missouri House Budget Committee chairman hinted Wednesday during a meeting of the Coordinating Board for Higher Education there may be a lengthy debate in the coming legislative session over cost-saving reforms to the state's Medicaid program, which would happen as legislators figure out how to expand the program, per voters' desire.

House Budget Committee Chairman Rep. Cody Smith, R-Carthage, also said next year will be a challenging one from a budget perspective because that's when the economic effects of the COVID-19 pandemic will appear in tax receipts.

Smith and his Senate counterpart, Sen. Dan Hegeman, R-Cosby, who is chairman of the Appropriations Committee, were included in the higher education board's virtual meeting Wednesday because the topic of next year's budget was on the agenda for discussion. It's the Department of Higher Education and Workforce Development's priority to restore institutions' core funding and support financial aid programs.

Gov. Mike Parson in the spring and early summer withheld a combined total of more than $95 million from four-year colleges and universities' budgets, and more than $18 million from community colleges, because of the pandemic and its effects on the state's budget. That was for the 2020 fiscal year.

Revenue collections for the state are doing well - more than $100 million, or 14.5 percent, more last month than November 2019, the Office of Administration reported Wednesday.

Smith said, however, that the 2021 fiscal year is complicated by 2019 calendar year tax revenue that normally would have come in during the spring and the previous fiscal year instead coming in during July, on account of the tax filing deadline being pushed back because of the pandemic.

He said the budget for the 2022 fiscal year, which lawmakers will have to craft in the spring, will be the first in which tax receipts were affected by the pandemic, tax receipts from the 2020 calendar year - reflecting businesses closing, unemployment and decreased tax liabilities.

"We are looking to the next year to be one that will be challenging" from a state budget perspective, Smith said.

Complicating that is that voters in August approved expanding the state's Medicaid program, MO HealthNet, and the program is estimated to grow by about 230,000 people.

Perspectives on the pros and cons of Medicaid expansion vary, but Smith, Hegeman and other Republican lawmakers and leaders stated ahead of the August election they were decidedly against expansion, arguing it would come at the cost of public education, among other claims.

Medicaid expansion is an option given to states under the federal Affordable Care Act, and the federal government pays 90 percent of the costs for people who qualify.

A fiscal note received by the state House Budget Committee over the summer said there is a possible range in cost to expand from an annual expenditure of $200 million to a savings of $1 billion.

"There's no easy way" to expand Medicaid, Smith said Wednesday, adding, "It will have a cost and an impact on the larger budget."

To that end, he said, "We will need to have some reforms to our Medicaid program that will generate cost savings," and that would probably be a work in progress until the last days of the session.

Hegeman said a consensus revenue estimate for the 2022 fiscal year would be released soon, and Smith said it would be what he considers a conservative estimate.

"The saving grace has been federal dollars," including the use of federal money to supplant general revenue in the state's budget and offer more flexibility, Hegeman said.

Smith said it's possible the state will be given an extension on the use of its federal aid money - which currently has an end-of-the-year deadline for spending - and a new federal stimulus package would come through.

In the meantime, as for what higher education institutions could do to advocate lawmakers for more funding, Smith advised: "That is drawing as straight a line as possible from higher education to the workforce needs of our state," and showing why funding higher education is important to those efforts.