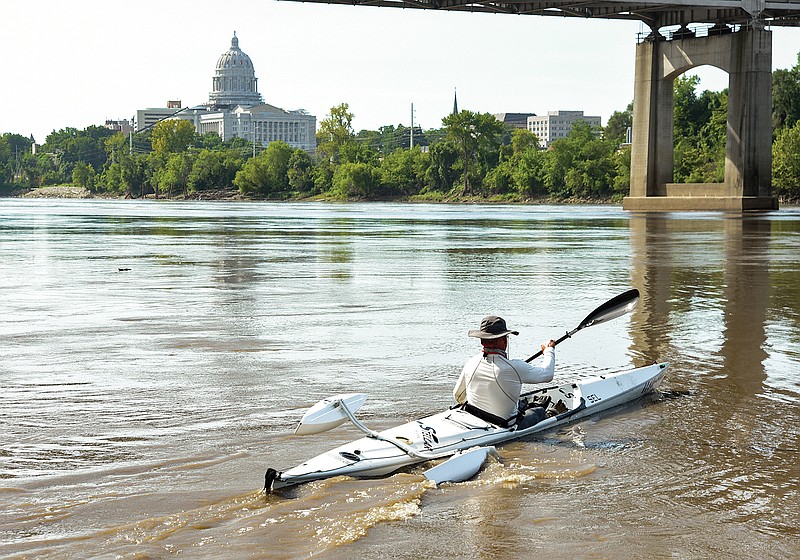 MR340 participant Gary Sanson, of Excelsior Springs, gets back on the water Wednesday morning, Aug. 5, 2020, after being among the early group of paddlers to first stop in or pass the Jefferson City checkpoint.

The MR340 is billed as the "world's longest nonstop paddling race," bringing canoeists and kayakers from around the world to run a nonstop 340-mile race course from Kansas City, Kansas, to St. Charles on the Missouri River.

The race was started in 2006 by Scott Mansker and Russ Payzant with only 16 paddlers. The pair formed the organization Rivermiles LLC, which organized and hosted the race for its first 15 years. The largest MR340 was in 2018 with 433 boats.

Rivermiles will continue running the race as a contractor for Missouri River Relief.

"Nobody understands the river and the communities that value her better than they do," Rivermiles Race Director Scott Mansker said in a news release. "Recreation on the Missouri River will continue to grow under their stewardship."

MRR is a nonprofit whose mission is connecting people to the Missouri River through river cleanups, education programs and recreation. Since 2011, the organization has worked with more than 27,000 volunteers to remove 960 tons of trash from the Missouri River and educate more than 25,000 students. MRR has been involved with the MR340 since 2008 as part of the safety boat crew.

"The real mission of the MR340 has always been to build a community of people that have a deep knowledge and care for the river," MRR Executive Director Steve Schnarr said. "That's the goal of everything River Relief does, too. It's a perfect relationship, and we are really excited to be more deeply involved with the future of the race."

Schnarr said special characteristic of the MR340 is the engaged community of paddlers that has built up around the race.

"Finishing the MR340 is a huge accomplishment because it takes a big heart and uncommon tenacity," Schnarr said. "The kind of people that come back to take on that challenge again are really unique."

One change to the race in 2021 will involve how registration works for participating paddlers. Race registration will open at 8 a.m. Jan. 1, and paddlers can hold their slot in the race with a $50 deposit. They will receive a custom fundraising page they can use to raise the remaining $200 of their race registration as a donation to Missouri River Relief. That $200 donation will be required by May 1.