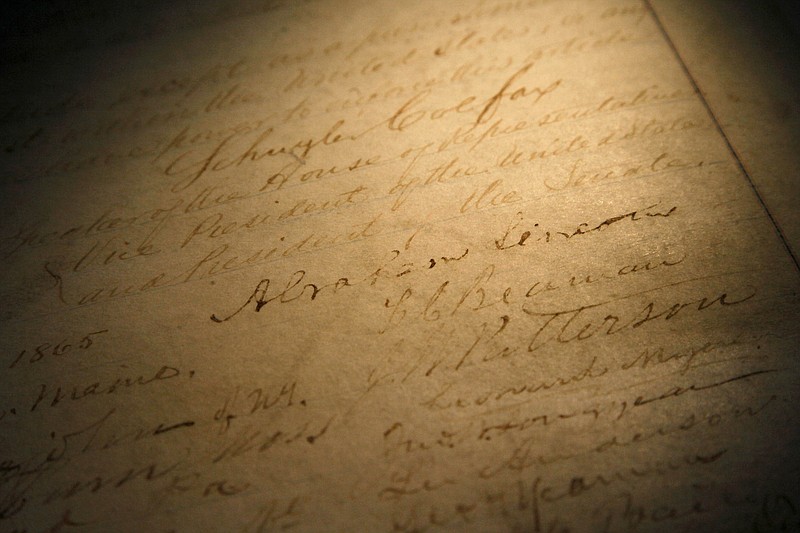 FILE - This Nov. 29, 2011, file photo shows the signature of president Abraham Lincoln on a rare, restored copy of the 13th Amendment that ended slavery, in Chicago. National lawmakers are expected on Wednesday, Dec. 2, 2020, to introduce a joint resolution aimed at striking language from the U.S. Constitution that enshrines a form of slavery in America’s foundational documents. (AP Photo/Charles Rex Arbogast, File)

The resolution, spearheaded and supported by Democratic members of the House and Senate, would amend the 13th Amendment's ban on chattel enslavement to expressly prohibit involuntary servitude as a punishment for crime. As ratified, the original amendment has permitted the exploitation of labor by convicted felons for more than 155 years since the abolition of slavery.

The 13th Amendment "continued the process of a white power class gravely mistreating Black Americans, creating generations of poverty, the breakup of families and this wave of mass incarceration that we still wrestle with today," Sen. Jeff Merkley, of Oregon, told the Associated Press ahead of the resolution's introduction.

A House version is led by outgoing Rep. William Lacy Clay, of St. Louis, who said the amendment "seeks to finish the job that President (Abraham) Lincoln started."

It would "eliminate the dehumanizing and discriminatory forced labor of prisoners for profit that has been used to drive the over-incarceration of African Americans since the end of the Civil War," Clay said.

In the Senate, the resolution has Sens. Bernie Sanders, of Vermont, Ed Markey, of Massachusetts, and Chris Van Hollen, of Maryland, signed on as co-sponsors.

"This change to the 13th Amendment will finally, fully rid our nation of a form of legalized slavery," Van Hollen said in an emailed statement.

Constitutional amendments are rare and require approval by two-thirds of the House and Senate, as well as ratification by three-quarters of state legislatures. Should the proposal fail to move out of committee in the remaining weeks of the current Congress, Merkley said he hoped to revive it next year.

The effort has been endorsed by more than a dozen human rights and social justice organizations, including The Sentencing Project, the Anti-Recidivism Coalition and Color of Change.

"It is long past time that Congress excise this language from the U.S. Constitution which should begin to put an end to the abusive practices derived from it," said Laura Pitter, deputy director of the U.S. program at Human Rights Watch, which also endorsed the amendment.

The proposed amendment comes nearly one month after voters in Nebraska and Utah approved initiatives amending their state constitutions to remove language that allows slavery and involuntary servitude as criminal punishments. In 2018, Colorado was among the first U.S. states to remove such language by ballot measure.

Although nearly half of state constitutions do not mention human bondage or prison labor as punishment, just more than 20 states still include such clauses in governing documents that date back to the 19th century abolition of slavery.

In Merkley's Oregon, voters in 2002 approved the elimination of constitutional language that prohibited Black Americans from living in the state unless they were enslaved.

He said the movement toward a federal amendment is "kind of saying to the world, let's not forget this big piece of injustice that's sitting squarely in the middle of our Constitution, as we wrestle with criminal justice reform."

Many Americans will recognize modern-day prison labor as chain gangs deployed from prison facilities for agricultural and infrastructure work. The prevalence of prison labor has been largely accepted as a means for promoting rehabilitation, teaching trade skills and reducing idleness among prisoners.

However, the practice has a much darker history. Following the abolition of slavery, Southern states that lost the literal backbone of their economies began criminalizing formerly enslaved Black men and women for offenses as petty as vagrancy or having unkempt children.

This allowed legal re-enslavement of African Americans, who were no longer seen as sympathetic victims of inhumane bondage, said Michele Goodwin, a constitutional law professor at the University of California, Irvine.

"These people became criminals, and it became very difficult for many abolitionists to use the same kinds of emotional messaging about the humanity of these individuals," Goodwin said.

Today, incarcerated workers, many of them making pennies on the dollar, work in plants, manufacturing clothing, assembling furniture and even battling wildfires across the U.S., much of it to the benefit of large corporations, governments and communities where they've historically been unwelcome upon release.

Researchers have estimated the minimum annual value of prison labor commodities at $2 billion, derived largely through a system of convict leasing that leaves these workers without the legal protections and benefits Americans are otherwise entitled to.

And while prison work is largely optional for the 2.2 million individuals incarcerated in the U.S., it's a grave mistake to disassociate their labor from the original intent of the penal system, Goodwin said.

"Your freedom has been taken away - that's the punishment that society has assigned," she said. "The punishment is not that you do slave work, that is unpaid labor or barely paid labor."