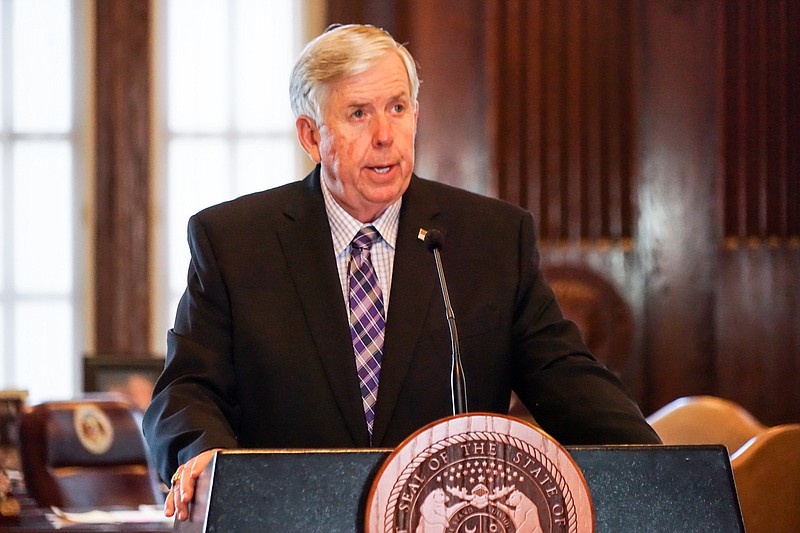 The News Tribune is offering this article free to all readers because it includes information important to the health and safety of our community.

A new, saliva-based test for COVID-19 developed in part by researchers at Washington University in St. Louis has been approved by the U.S. Food and Drug Administration, Missouri Gov. Mike Parson announced Wednesday.

More details were not immediately available from Washington University or the FDA, but Parson expects to know more in the coming days on how the technology would benefit COVID-19 testing in Missouri.

Parson said the new test "will help us continue to increase testing volumes and improve turnaround time for test results."

He said the hope had been to get the test approved a month ago.

"There are some other things that go along with having the equipment to be able to utilize that, but this is a game-changer," he said.

The governor did not immediately know how soon enough of the tests might be available to aid the average school or college, for example.

The test was collaboratively developed by Washington University's genetics department and McDonnell Genome Institute with Fluidigm - a California-based biotechnology company.

Company spokesperson Tyler Gagnon said Fluidigm and Washington University separately filed for emergency use authorization, or EUA, of the test with the FDA.

Fluidigm announced Tuesday the approval of its EUA by the FDA; it's not immediately clear which EUA Parson may have been referring to.

Washington University earlier this month announced screening events to have been held last week where volunteers were asked to help evaluate that the technology could be used to test a large number of people and return positive results.

The clinical study submitted with Fluidigm's EUA showed complete agreement between the results of the saliva test and paired nasopharyngeal samples analyzed with authorized tests, according to a news release from the company.

In terms of how the test works, Gagnon said "All that is needed is collection of a small amount of saliva into a sterile container."

The container is a small plastic vial that collects saliva through what looks like a funnel - no nasopharyngeal swab.

Gagnon said only 15 microliters of saliva is needed per test, and samples are stable at ambient temperature for up to 120 hours after being collected.

"Once the (analysis) process is started, first batch results are returned in 5.5 hours and additional results (additional batches of 192 tests) can be returned every 30 minutes with continuous sample processing," Gagnon said.

Private, county health and academic labs can all be certified to be able to perform the test and collect results.

The new guidance was posted earlier this week on the website of the Centers for Disease Control and Prevention.

The agency previously advised testing for close contacts, but on Monday that was changed to say testing is no longer recommended for symptom-less people who were within 6 feet of an infected person for more than 15 minutes.

Missouri Department of Health and Senior Services Director Dr. Randall Williams on Wednesday said he doesn't understand why U.S. health officials shifted gears on testing and has been trying to get more information.

"At this point in time, barring something I learn that I don't know yet, that would not be the direction I'd recommend Missouri go," Williams said.

Williams said, unless he's presented with "clear evidence" to the contrary, he still encourages Missourians to get tested if needed and as recommended by their doctors.

The Associated Press contributed information to this report. This article was updated at 5 p.m. Aug. 26, 2020, with additional details.