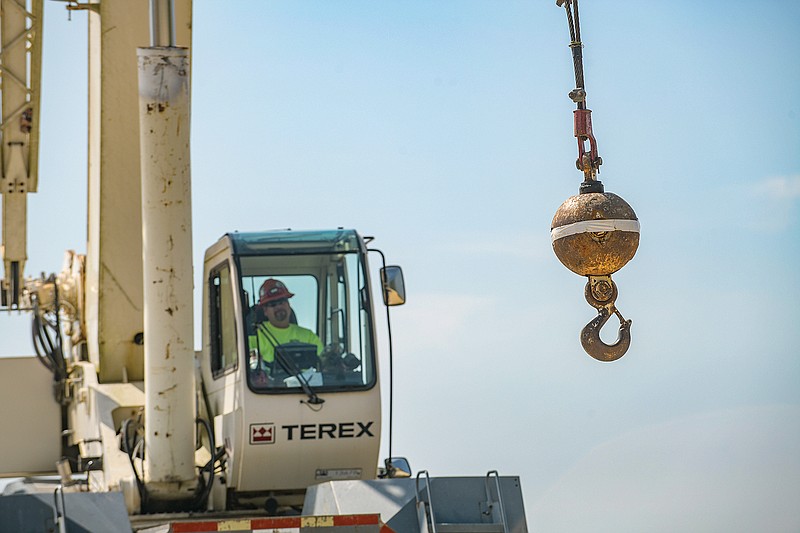 Bill Cooke, of St. Louis Guarantee Electrical, operates a crane Thursday to demonstrate one of the skill sets learned during his crane operator certification course at State Technical College of Missouri in Linn. State Tech hosted the demonstration to celebrate the first graduating class of newly certified crane operators, a new training course offered on the campus of State Tech.

State Technical College of Missouri in Linn is now home to what is the only public crane operator certification location in the state, as far as the college president knows.

State Tech President Shawn Strong said there is an operator's union in St. Louis that offers certification, but what's at State Tech is the new AGCMO Crane Training Center.

The new facility is "the first of its kind in the state," according to a news release, and the result of a three-way partnership between State Tech, Emery Sapp & Sons civil construction company, and Associated General Contractors of Missouri.

Strong said the idea has been several years in the making, but it came together within the last several months - which is also when the concrete pad that a crane can park upon was poured in what's an otherwise gravel lot marked with spray-painted circles, barrels and metal rods.

He said the training center is, for now, available to industry workers, but he added it would eventually become part of State Tech's curriculum for its heavy equipment operations program.

The certification or re-certification that workers get through the training is a mobile crane certified operator card by the National Commission for the Certification of Crane Operators.

The federal Occupational Safety and Health Administration requires anyone who operates a crane in construction must pass a third-party, nationally-accredited written and practical tests, and that certification is valid for five years.

Len Toenjes, president of AGCMO, said having that certification probably adds at least $10,000 annually to a worker's market value, though the increase may not be hourly.

Toenjes said a big company may set up its own program, but there are plenty more that do not have that capacity.

"Previously, some of our members sent people to Texas, Florida or elsewhere to get this training," he said in the news release. "This is a way to help provide certified crane operators to businesses while also providing immediate, well-paying employment to Missourians."

ESS Vice President Chip Jones said in the news release the program at State Tech "is a beneficial asset to both the regional craft workforce and the community at large."

State Tech provided the land for the site; ESS, more than $20,000 in labor and materials; and AGCMO will provide instruction and curriculum.

Bill Cooke, of St. Louis, and with Guarantee Electrical, was working Thursday with the crane on site, and said others in the class had come from as far away as Arkansas.

Cooke said the company he works for has a smaller crane than the one he was working with Thursday - that one is "for bridges and heavy, heavy stuff."

As for the practical exams, those include doing four tasks, each in a certain amount of time and without knocking over anything.

The last task is to pick up a 1,100-pound weight, lift it more than 3 feet off the ground, swing it through a zig-zag course and set it down in a painted target area.

Toenjes said Miller was brought in from Wisconsin, but AGCMO is working to get one of its staff to be a certified trainer.