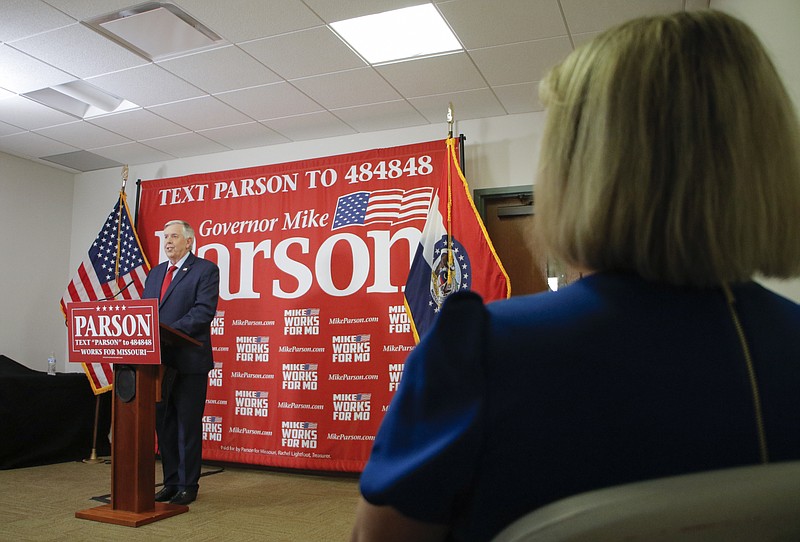 First Lady Teresa Parson watches her husband, Gov. Mike Parson, give his victory speech on Tuesday after he officially became the Republican nominee for the gubernatorial race this November. In his speech on Tuesday, Aug. 4, 2020, Parson emphasized his goal to prioritize business in Missouri, and expressed anti-socialist sentiments against his Democratic opponent, State Auditor Nicole Galloway.

A political showdown between Missouri's incumbent governor and its state auditor for the governorship is now set for the November election.

The former lieutenant governor, Parson became governor in June 2018 following the resignation of former Gov. Eric Greitens - making Tuesday the first time Missouri voters have selected him for the position he currently holds.

Parson said at an election night event at the Missouri Chamber of Commerce in Jefferson City: "As governor, I have been tested since day one - leading Missouri through historic drought, floods, tornadoes, COVID-19 and civil unrest - and I am ready to continue moving this state forward."

In the next four years, Parson said, he would "ensure law and order" against violent criminals, continue to pursue development of the workforce and economy, and repair the economy after the damage of the pandemic.

Galloway was appointed state auditor in April 2015, following the death of elected auditor Tom Schweich that February. She was elected to the office in 2018.

Galloway said during a remote event Tuesday night that Missouri cannot return after COVID-19 to where it was on the eve of the pandemic, because "where we were wasn't good enough for too many Missourians."

"I knew then that Missouri's working families needed change. I'm even more certain of it now," she said.

"The most important thing the next governor will have to do is contain the spread of the virus and rebuild Missouri's economy," she said. " We need a reset on our coronavirus strategy" - including a need for universal testing, she said.

Kehoe was appointed by Parson in June 2018 to be lieutenant governor - also making Tuesday night the first time Missouri voters selected Kehoe for the position he currently holds.

He said Tuesday night he was "very humbled" to win Missourians' support, with the primary being his first time running in a statewide election.

As of approximately 9:45 p.m., Canady had 70.5 percent of the Democratic vote, ahead of St. Charles small business owner Gregory Upchurch, with 1,267 0f 3,575 precincts reporting.

"We need to have some honest conversations about what it's going to take to move us forward post-COVID-19," she said, adding that personal differences have to be set aside, particularly to help the economy recover.

Rich Finneran beat Elad Gross - fellow Democratic candidate from St. Louis - to be the party's nominee for attorney general on the November ballot.

Finneran is a St. Louis-area lawyer who served as an assistant U.S. attorney in St. Louis from 2010-17, according to the Associated Press. He now works at St. Louis law firm Bryan Cave Leighton Paisner and is a law instructor at Washington University.