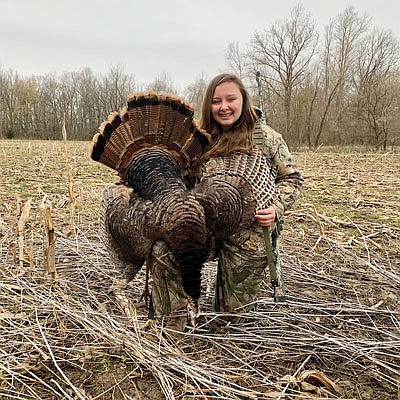 Bailee Butler with her second turkey, taken seven years after her first.

I had to learn the hard way. That's not unusual for me. Whatever the goal, I tend to put my head down and plow towards it.

Sometimes, my aggressive approach leads to the expected success of my desired outcome. Other times, I break what I'm trying to build. As I did with my dream of turning my eldest daughter into a passionate hunter at a very young age.

The memory of Bailee's first turkey hunt is as vivid now as it was the day it happened seven years ago. We had been sitting in a blind on the edge of a picked bean field, back in a finger surrounded by woods on three sides. Turkeys roost all around the field and often fly down into it at first light. They didn't that morning. The wind was ferocious, howling steadily with gusts that had to be reaching 30 mph. It was deafening, so we never heard a gobble. We hadn't seen any birds, either. With nothing happening, Bailee grew bored in the blind. I needed a new plan.

There's a large pasture on the backside of this property. I had a feeling we could catch a gobbler out in the green field doing his thing. We left the blind and slipped through the woods towards the back of the property. Once in view, I couldn't believe the luck. A band of five jakes were messing around 100 yards out. I quickly situated Bailee at the base of a cedar tree and propped her gun up on a limb.

We were right on the edge of the woods. The jakes had no idea we were there. About 15 yards out in the field is a swale. Bailee couldn't see over its lip while sitting down. She held her gun ready and looked to me for guidance. To cut through the howling wind, I hit a box call pretty hard. Those birds started running right to us. I dropped down behind Bailee. Almost instantly, there were a bunch of red heads peaking up from the swale. When the first bird came over the top, Bailee pounded him. Then the tears started rolling.

The shotgun she used is a single shot 20-gauge we had won at a Nation Wild Turkey Federation banquet. She had shot it a number of times using a Lead Sled to eliminate the recoil. I assumed with the excitement of the moment and her adrenaline flowing, she wouldn't feel the kick. I was wrong. It hurt her and it scared her, and I knew right away I had made a mistake.

After soothing her for a few moments and wiping away tears, she was excited about her first turkey. We took pictures, and she was showered with praise, so she was happy. But the damage had been done by the shoulder blast. Plus, she killed one on her very first hunt. Those two factors combined started her distancing from hunting.

For the next few years, she didn't show much interest, until she just started saying flat out she didn't want to go. It was very hard for me to accept.

Time heals all wounds, and a first boyfriend who likes to hunt and fish may have had something to do with it, but all of a sudden, my now teenage daughter is interested in hunting again. When she told me she wanted to youth hunt this spring, it was everything I could do to keep from trying to attempt a backflip.

Saturday morning of the youth season seemed to be a setup for failure. The temperature had dropped 40 degrees from the day before, and Bailee, who was hunting in yoga pants and a sweatshirt, was obviously freezing. She crawled inside her sweatshirt like it was a blanket.

As badly as I wanted to stay put and wait on the gobbler we'd heard hammering on the roost to make his way to us, I knew she was miserable and this was my opportunity to show her I was more concerned with her comfort than I was with killing a turkey. She was trying to tough it out, but when I asked her if she wanted to go, she immediately said yes.

Sunday morning was just as cold, but we were dressed for it. The problem Sunday was we never heard a bird gobble. The cold front had them shut down. But we were comfortable and warm in our blind. Things were good.

I'd occasionally throw out a sequence on a box call, then sit back and watch the field. When I heard "dad, dad, right there," my heart skipped a beat. I pulled up my binoculars to confirm what I already knew. Two jakes were making their way to us.

The larger of the two put on a show. He never gobbled, but he sure danced. All fanned out and strutting his way towards us like a country line dancer slipping across the floor to his lady. They were in range long before Bailee pulled the trigger. I told her whenever she was ready to go ahead. She said, "Base of the neck, right?" I said, "Yes," and she crumpled him on the spot.

Seven years was a long time to wait, but my girl has come back to it. Her smile and laughter were heartwarming. I could tell she was genuinely excited. I pushed too hard when she was young. I didn't mean to, but I did. I learned the hard way. But by relaxing and not pressuring her to hunt, the seed that was planted years ago, has sprouted and she's come back to it on her own schedule. I hope the passion is here to stay.

Brandon Butler, the director of communications for Roeslein Alternative Energy, is an outdoors columnist for the News Tribune. Contact him at [email protected]