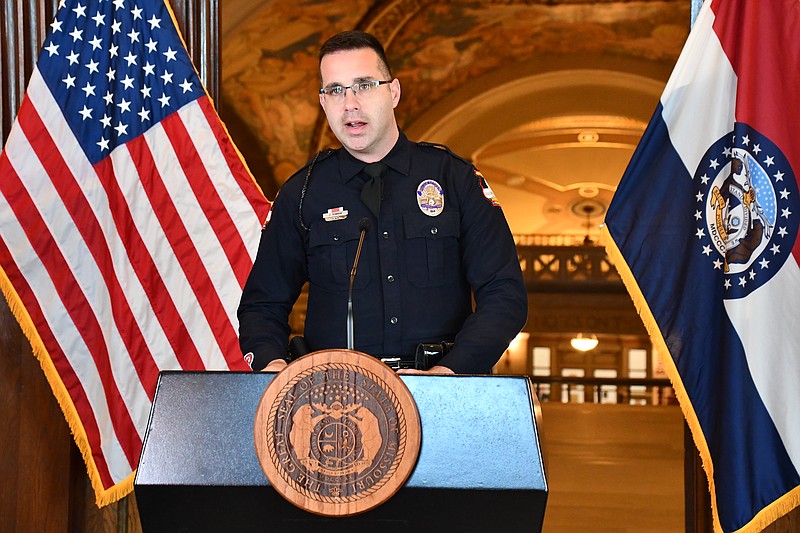 As COVID-19 cases surged over the 3,000 count in Missouri, first responders who are infected or quarantined because of the disease will be covered by workers' compensation, the governor and state's Labor Department director announced Tuesday.

While the threat of the virus won't stop police officers, firefighters or other first responders from answering calls, "knowing that (exposure to the virus) will be treated as a duty-related illness will allow peace of mind for our officers and our loving families," said Jefferson City Police Department Officer Jeremy Bowman.

Bowman is also president of the Jefferson City Fraternal Order of Police Lodge 19.

Police departments across the state already face infected officers and others who are quarantined or awaiting test results, he said.

"To be clear, nearly every first responder agency will have a diminished workforce because of COVID-19 illness or quarantine protocols," Bowman added.

Anna Hui, director of the Missouri Department of Labor and Industrial Relations, said it would have been difficult without the emergency directive given to the department from Parson for first responders to have otherwise proven an infection was the result of their professional duties.

Hui said the new rule will go into effect in 10 days but will cover any first responders already affected before that time.

"This is a big deal. This is a really big deal to our members, and I can't express enough of the sense of security and the stabilization that this is going to give our first responders going into these calls, going into these trying times," said Mark Woolbright, vice president of the International Association of Fire Fighters, 2nd District.

There were 3,037 reported cases of COVID-19 and 53 deaths from the disease in Missouri, as of Tuesday afternoon, according to the state's Department of Health and Senior Services.

The Missouri Hospital Association reported that among 129 of 154 hospitals in the state, there were 747 intensive care beds available, out of a total of 2,129.

Across the state, 508 people were hospitalized for COVID-19, based on 114 hospitals' reports.