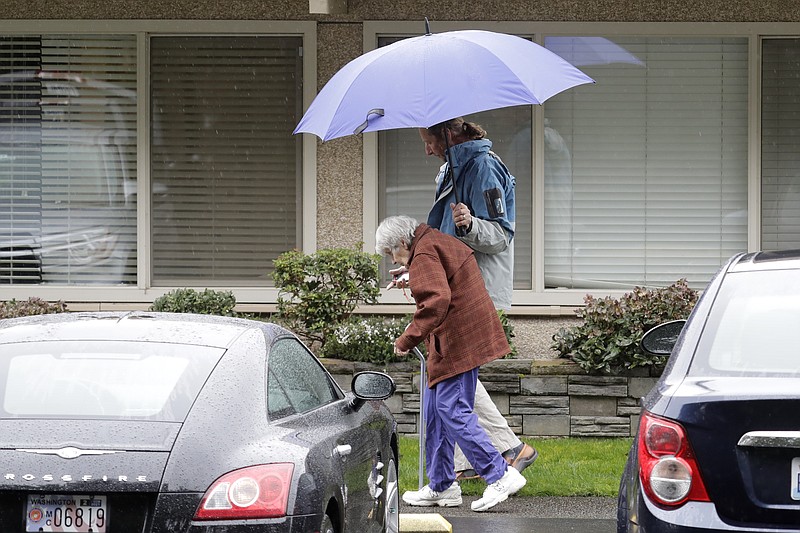 In this March 6, 2020 photo, Charlie Campbell, right, walks with his mother, Dorothy Campbell, to visit his father, Gene, who was staying at the time at the Life Care Center in Kirkland, Wash. Charlie Campbell is nearly 13 years sober, but said he has been feeling tested due to stress from having his father now recovering from the new coronavirus in a hospital, and several other sources of worry and stress in his life. (AP Photo/Ted S. Warren)

His dad is recovering from COVID-19 in a suburban Seattle hospital. His mom, who has dementia, lives in a facility that now bars visitors because of the virus. A good friend recently killed himself.

Last week, Campbell, 61, tried his first online Alcoholics Anonymous meeting. His internet was shaky, and he didn't get to speak. The meeting did not give him the peace and serenity he craved.

The coronavirus pandemic is challenging the millions who struggle with drug and alcohol addiction and threatening America's progress against the opioid crisis, said Dr. Caleb Alexander of Johns Hopkins' school of public health.

People in recovery rely on human contact, Alexander said, so the longer social distancing is needed "the more strained people may feel."

Therapists and doctors are finding ways to work with patients in person or by phone and trying to keep them in treatment. And many are finding new reservoirs of strength to stay in recovery.

In Olympia, Washington, a clinic for opioid addiction now meets patients outdoors and offers longer prescriptions of the treatment drug buprenorphine - four weeks, up from two - to reduce visits and the risk of infection, said Medical Director Dr. Lucinda Grande.

Elsewhere, federal health officials are allowing patients to take home methadone, another treatment drug. And they issued emergency guidance to make it easier for addiction professionals to offer help by phone, without obtaining the written consent required to share patient records.

With cities and states locked down, online support groups are forming, among them a global group started by a San Francisco-area tech worker that's called One Corona Too Many. In the New York City metro area, with more than 6,000 meetings weekly, organizers offer guidelines on best practices and tutorials on how to set up video conference calls.

Reagan Reed, who leads the Inter-Group Association of AA of New York, said there have been snags. Some groups did not know how to change settings to private, others have gone over capacity, revealing phone numbers.

In suburban Boston, Catherine Collins, a 56-year-old recovering alcoholic, said it has been an adjustment to attend AA meetings via the online platform Zoom.

Collins, who has been sober since 1998 and works for Spectrum Health Systems, the state's largest addiction treatment provider, said preserving some social interaction is critical for those in recovery.

"People need to be talking about what's happening in the world because if they're not, they're at risk of picking up a drink," she said. "It's more important than ever now to have hope, and that's what these meetings give."

Job loss is a gut punch to some, just as they begin to rebuild their lives.

Courtney Keith, a waitress and the mother of a 13-year-old girl in Toledo, Ohio, said she spent the last four years paying off fines because of her past trouble when she was addicted to drugs and alcohol. She lost her job when the state banned sit-down dining.

"I was living paycheck to paycheck. I have no savings," the 33-year-old said. She's applied for a job at a grocery and dug through her loose change stashes, scraping together a few hundred dollars.

She keeps in close touch with her recovery sponsor.

"I haven't had any thoughts about using, but everybody is different. What if this does lead to a mass relapse?" she said.

Campbell, a retired nurse, is driving from his home in New Mexico to Washington state to check in on his parents again. He got some good news last week: His dad's latest COVID-19 test was negative.

He'll said he'll try online meetings again, but he plans to mostly lean on phone calls with a longtime buddy and the emotional support of his wife.

"In the short term, you've just got to walk the middle line and try to find the good in all this," Campbell said, "And know it's not going to last forever."