Unearthed cells from 1840s to be featured in MSP history tours 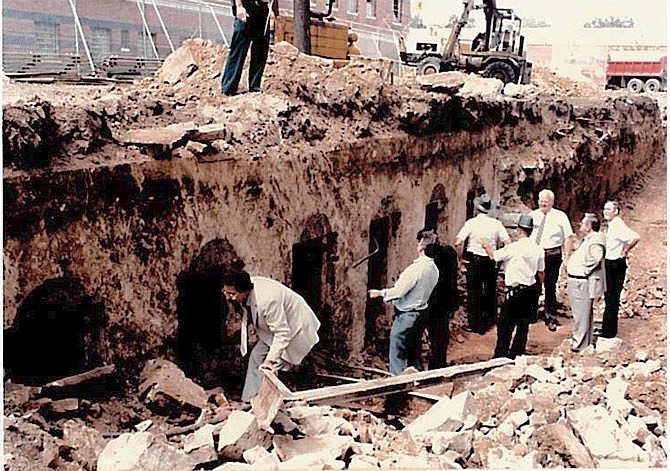 Six cells from an old cell block were uncovered at Missouri State Penitentiary between 1984-85. The cells are estimated to have been built in the 1840s. The buried cells were discovered behind Housing Unit 3 and Housing Unit 2.

The history of the old Missouri State Penitentiary in Jefferson City has been researched and preserved for decades. Damage done by the May 22 tornado has added an additional layer to its story.

As tours resume at the former penitentiary, some aspects will be unavailable due to tornado damage.

To provide more to the MSP story, a new stop on the history tour will recall the past.

The Jefferson City Convention and Visitors Bureau and Missouri Office of Administration's Division of Facilities Management, Design and Construction are working to uncover buried cell blocks at MSP to add to tours by spring 2020.

Mark Schreiber is passionate about MSP and its history. Currently Jefferson City's Ward 5 councilman, he previously served as an assistant to the prison's director of adult institutions and remembers when six cells were found during a construction project between 1984-85.

"(MSP) was under a court order about 1984-85 to put in a recreation yard for the offenders that were on what was called then death row," Schreiber said.

As contractors dug between Housing Unit 2 and Housing Unit 3, formally known as B and C Hall and F and G Hall, they hit something solid, he said.

"I got a phone call from the warden at the time," Schreiber said. "The warden said, 'Mark, you need to come over here. I've got something to show you.'"

When he arrived, he took the only photos of six cells that were found underground, he said.

"One of the ones that I specifically remember is cell No. 46," Schreiber said. "You could still read the number that was painted above the door in the concrete."

The cell blocks are similar to what can be seen inside Housing Unit 4, he said. The structure, constructed in 1868, was severely damaged by this spring's tornado, according to a report done by Allstate Consultants.

The tornado removed or damaged all of the roofing and a large chunk of the roof structure known as A Hall. It could cost more than $2 million to repair, according to July cost estimates provided by OA.

The buried cells had steel braces made by blacksmiths that would have held the wooden doors in place, Schreiber said.

"The wooden doors were totally rotted away, but the cells themselves were in very good condition," he said.

Based on his research, Schreiber said, he believes the cells were called the Centennial Cells and dated to the 1840s, before Housing Unit 4 was built.

The inmates probably tore down the cell block, which would have been at least a three-story structure, Schreiber said. During the demolition, when the inmates got to the ground level, the cells were covered with dirt. Bricks and dirt are shown spilling out of the cells in Schreiber's photos.

"We don't know actually how big the unit was," he said. "We figured with the ground unit it was probably two more floors above that approximately - built out of concrete, all hand-done."

After the cells were shown to staff, they were recovered so contractors could resume constructing a recreation area, he added.

When CVB Executive Director Diane Gillespie and Schreiber discussed ways to enhance the MSP tour experience for visitors, excavating the cells was a project they were both excited about.

The organization paid $14,935 for the survey using tour revenue, Gillespie said. When the tornado came through, the project was paused.

The CVB Board of Directors gave the green light last week to proceed with the project.

"At first I was kind of like, 'We might want to put the buried cells on hold,'" Gillespie said. "But the more I thought about it, we ought to go ahead and move forward with it because it does add another level to the tour."

The buried cells would be added to the three-hour history tour of the old penitentiary, she said.

"The MSP tour staff will be sharing the project with our visitors when the tours start back up Oct. 1," Gillespie said.

The organization does not have a final timeline for the project, she added.

After the survey is complete, phase two will include digging on site, which would cost the CVB about $20,000, Gillespie said.

Phase three will include excavating the cells, installing sidewalks and stair-access to the cell, and finishing touches, she added.

During the construction of the recreation area in the 1980s, a concrete pad was installed to the west, which acted as a shield all these years, Schreiber said.

That area could be used as a patio in the project for private events or bus tours in the future, Gillespie said.

Although the site is facing additional repairs from tornado damage, working on this project sends a positive message, she said. People who are invested in the history of MSP and the tours will see they continue to move forward despite the tragedy, she added.

Schreiber, who previously served as an MSP tour guide, will create the script for tour guides to discuss the cells, said adding the buried cells and the story of the tornado to the tour extends the site's overall history.

The project could also present an opportunity for archaeology students at colleges and universities to go through the process of uncovering more cells buried on-site, he said.

Modified tours of MSP will begin Tuesday. Housing Units 1, 3 and the gas chamber will be open for two-hour history and two-hour ghost tours. Visitors can check tour availability on the MSP website.