Jefferson City remains in the dark about St. Mary's sale 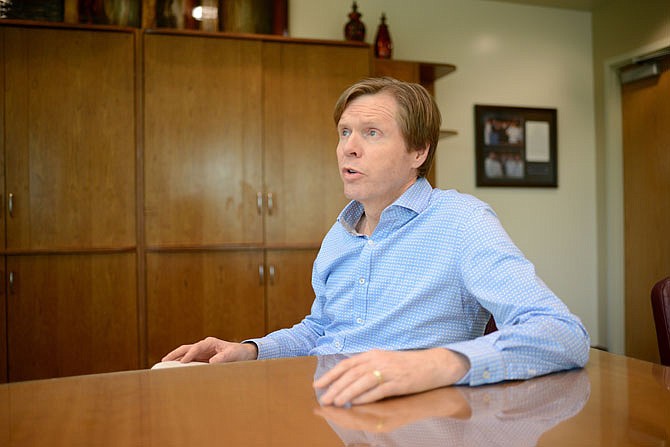 More than a year after news broke MU Health Care was negotiating to buy St. Mary's Hospital in Jefferson City, Cole County residents still have no answers to questions about the future of their health care.

She provided no new information about the negotiations last week. The newspaper asked for contact with Jonathan Curtright, chief executive officer of MU Health Care, but has not received a reply.

The news broke in August that the two health care providers were in exclusive negotiations to transfer ownership of the hospital to the university.

Also included in the transfer, should it happen, are SSM Health St. Mary's Hospital-Audrain, along with outpatient, home care, hospice and medical group locations throughout the region.

St. Mary's Hospital has operated in Jefferson City for more than 100 years. It opened a $200 million-plus, 375,000-square-foot facility at 2505 Mission Drive in 2014 - but apparently soon ran into financial difficulty.

Officials have said there has been a turnaround under interim President Phil Gustafson and President Mike Baumgartner, who took the reins early this year.

In May, SSM Health announced the sale of its home health and hospice ministries in Jefferson City and Mexico to LHC Group, which currently partners with about 350 hospitals nationwide, including MU Health Care and Capital Region Medical Center.

"Both organizations remain committed to finding new ways to collaborate and carry out our mission of saving and improving lives," Chew said in an email to the News Tribune.

Shortly after the announcement that the health care providers were negotiating the sale, area residents formed a coalition aimed at opposing it.

A Coalition for Choice was created to oppose health care monopolies and to advocate for consumer choice in health care.

Hallie Gibbs II, a Jefferson City attorney, late this week sent the newspaper a statement from the organization.

"A Coalition for Choice believes that both parties are still actively pursuing this merger," the statement said. "However, due to tremendous public opposition, they have moved their negotiations behind closed doors."

Keeping the negotiations private prevents the public from being engaged in the process. The coalition believes MU Health Care may attempt to pursue legislation that would exempt it from antitrust regulations, according to the statement.

"The coalition opposes any legislation that bypasses consumer protection laws and allows a hospital monopoly to form in Jefferson City," the statement said.

The statement said the coalition conducted an unofficial poll of 400 people in Cole, Maries, Miller, Moniteau, Morgan and Osage counties and found about 49.5 percent of respondents support halting negotiations and finding another buyer for the hospital, while about 22.5 percent opposed the idea.

"The coalition is confident that any attempt to change Missouri's anti-trust laws to facilitate this monopolistic merger will face significant opposition," according to the statement.

The coalition is poised to launch a public campaign to warn the community about the negative impacts of hospital monopolies and to encourage people to get involved in opposition of the sale.

"The coalition believes that with a different buyer, St. Mary's Hospital can continue to thrive and to provide needed, high-quality hospital care to Mid-Missouri," the coalition said.

Jefferson City Medical Group President Jeffrey Patrick said Wednesday that whether the sale goes through or not, JCMG has hired high-quality physicians whose patients are loyal to them.

"We have a customer-friendly, patient-friendly outpatient platform," Patrick said. "It's a very cost-effective platform."

The group is aligned with national trends that provide the best health care, he said.

Whoever is there, the group will support them.

"We are concerned if a consolidation happens, that there is no question it is going to increase costs, decrease quality, and decrease patient choice. It's not about what happens in the next six to 12 months, it's about what happens for generations and decades," Patrick said.

JCMG leaders were invited to a Boone Hospital meeting Tuesday night. At that meeting, Patrick said, the five-star Columbia hospital announced its intention to remain independent and partner with independent physicians.

JCMG is very supportive of St. Mary's Hospital, he continued. The group provides a majority of the hospital's admissions.

"We think they're doing a great job. They have improved their finances. The staff are very committed," he said.

JCMG doctors spend a lot of time at the hospital.

"It's important for this community that that facility succeeds," Patrick said.

However, even organizations with close ties to St. Mary's Hospital are in the dark about what is going to happen with it, he said.

"We've engaged a nationally, well-known law firm on mergers and anti-trust issues," Patrick said. "They will clearly need legislation for this to go through, in our legal counsel's opinion. I think that's part of why all of this is being done in a secretive manner."

Counsel has told JCMG that if MU Health Care and SSM Health are going to complete the sale, they'll need legislative protection.

"We absolutely will oppose that because those antitrust laws have been on the books since the 1850s for very good reason," Patrick said.

Further, these sorts of mergers are being shown to increase costs, he said, and are bad for communities.

In her email, Chew said MU Health Care is working with SSM Health to provide specialized care for communities by creating an agreement to provide orthopaedic care at St. Mary's Hospital - Audrain and providing an electrophysiologist (specializing in the electrical activity of the heart) once a week in Jefferson City.

"We are committed to creating an outstanding and sustainable health care model that provides quality care and support to patients, employees, physicians and communities across Missouri," she said. "As the health care industry evolves, it is essential that we work together in a way that benefits the people of Cole County, Audrain County and the University of Missouri."