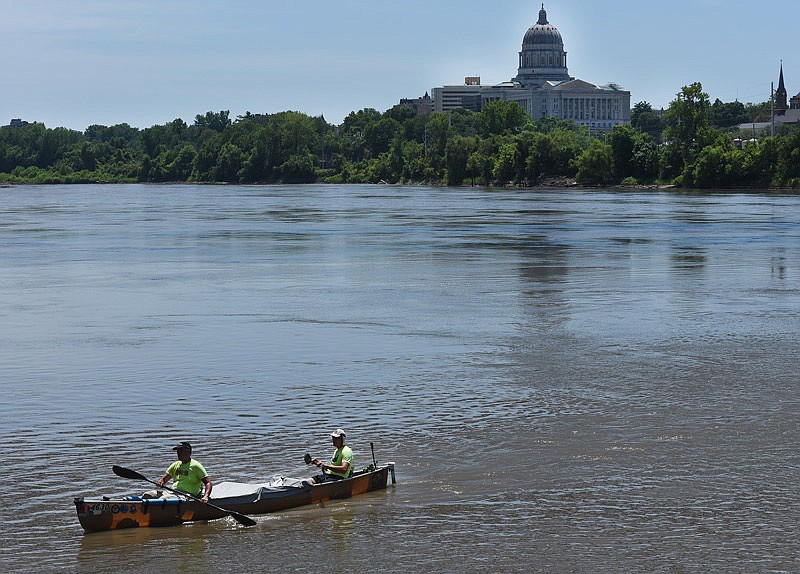 In this July 25, 2018 photo, Drake and Mark White paddle onto the shore of the Missouri River at the Noren River Access in Jefferson City during the MR340.

Two major events on the Missouri River are scheduled to take place in October.

The Missouri American Water MR340, which was scheduled to take place in July, was postponed due to flooding and to allow communities along the river to recover. The race has been rescheduled for Oct. 15-18.

MR340 organizers were in the same situation in 2011, when flooding forced them to delay the July race until October. Eight years later, they found the Missouri River was once again too dangerous for the race.

Everyone on the current roster will get an email with a choice to defer to 2020 or race in October. Also, everyone who was signed up for July but deferred to 2020 will get an invitation for October. The registration form will be reset for the new dates, and new paddlers will be welcome.

Missouri River Relief is heavily involved in this ultra-paddle race across the state by providing safety and support boats to race participants. With that in mind, organizers announced Wednesday that they have decided to delay their Jefferson City Missouri River Cleanup one weekend - to Oct. 26 - to "best serve the race and provide a safe and fun large-scale river clean-up in Jefferson City," according to the groups' news release.

MRR officials said they will contact all cleanup participants who have already signed up to confirm they will still be able to make it out to clean up the Big Muddy.