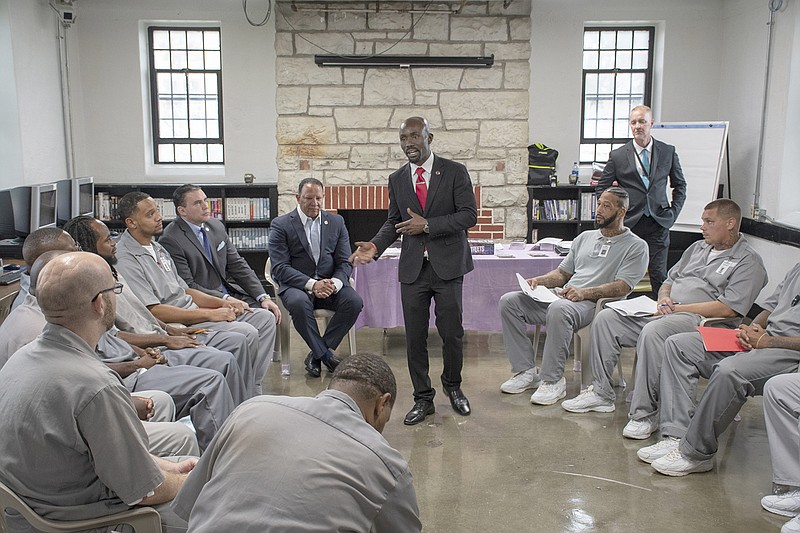 Jamie Dennis, Urban League Save Our Sons director, explains to Algoa Correctional Center prisoners what the SOS program can do to help them be better prepared to enter society once they are released from prison.

Twelve prisoners at the Algoa Correctional Center have been chosen to participate in a pilot program Missouri Department of Corrections officials believe could have a significant impact on recidivism.

DOC has partnered with the Urban League of St. Louis to have prisoners participate in the Save Our Sons program. The 12 are nearing release and will get two weeks of what is being described as intensive employment readiness, life skills and cognitive training before they re-enter society then access Urban League resources and programs in the community afterward in an effort to continue to make them successful in their new lives.

If the program is successful, it could be expanded into a national program.

The SOS program seeks to help economically disadvantaged African Americans and other men living in the St. Louis metropolitan community to find jobs and have the opportunity to earn livable wages. To complete these objectives, SOS helps the participants obtain post-secondary education and job training, and teach career skills and work ethics necessary to be successful employees.

Jamie Dennis, director of Save Our Sons St. Louis, said SOS has helped more than 750 men find jobs across the country since its establishment in 2015.

"There is a direct correlation between having a job and the potential for these men to get back into the criminal world," Dennis said. "We have a sleeping economic development giant with these men willing to work and a job market that needs them."

DOC officials said they have more than 300 employers who have contacted them with an interest in having inmates come work for them once they are released from prison.

"In 2017, we had the eighth highest incarceration rate in the country, and programs like this are a positive step in not only reducing recidivism, but also means less stress on our staffs and better uses of our resources," DOC spokeswoman Karen Pojmann said.

For Emory Hayes, this program is a chance for him to "grow up."

Hayes, who grew up in the Ferguson area of St. Louis, said he did get in trouble while he was in high school. However, he did well enough on the basketball court to earn a scholarship to Southeast Missouri State University in Cape Girardeau. He then became involved in gang and drug activity and lost his scholarship. From there, his life took various turns. There were times he was able to keep clean and have steady work, but in some cases, his past dragged him back down into addiction.

Now 41, Hayes is on track to complete his eighth stay in prison. As one of the 12 in this initial SOS program, Hayes is scheduled to be released in November.

"I know I need help, but I also know I'm a good person," Hayes said. "I tried to end my life several times before I got here. I talked to my dad, who is my friend, who told me I have to get my life together because I've got two daughters I've got to be there for."

"I knew Emory was a person that should be in this program because he opened up about his need for help," Miller said. "If they're not ready to do that, then they aren't going to be successful. He told me he was scared. I told him if he would give me 150 percent, then we'll give 150 percent. There's only so much we can do. I could tell he was sincere about making a change."

The incentives are there for the program participants, Dennis said.

"We don't want to see them just get by, we want them to be leaders for family and their community," he said. "We want them to get a job, keep a job, get promoted and remain marketable in the workplace."

Hayes will return to the Ferguson area when he is released, and he wants to be a role model but is "scared to death" because he knows how easy it could be to fall back into his old ways.

For the next four weeks, Hayes and the other 11 prisoners will be going to three- to four-hour sessions, five days a week. Miller said it's imperative to get the re-entry into society efforts going in prison and not once they get out.

"There are no hugs or coddling, and I think they respect that," Miller said.