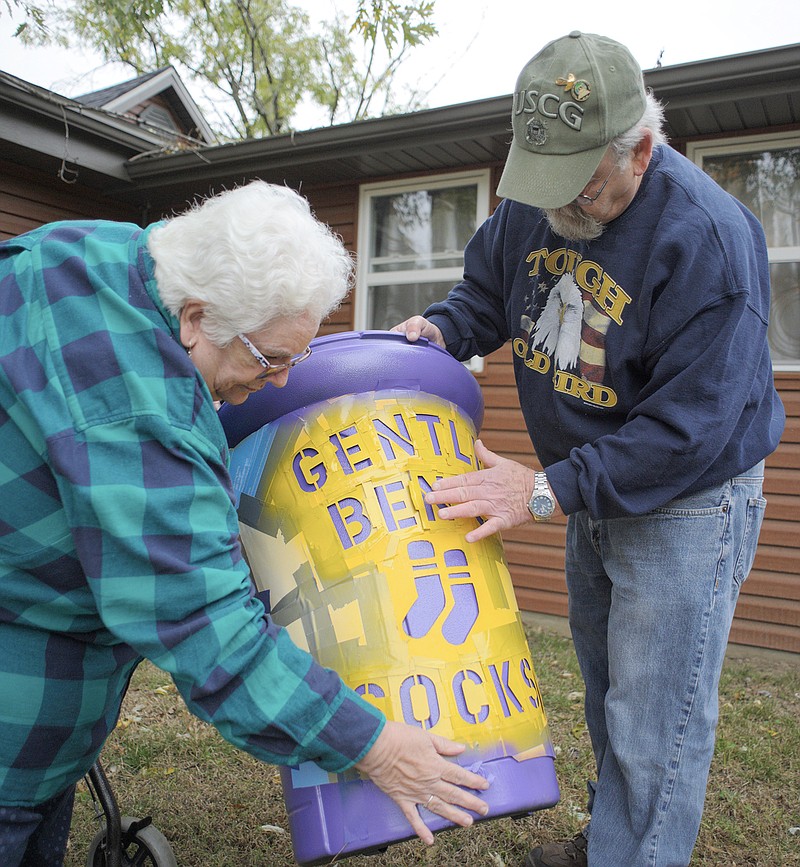 Janet and Ed Miller apply a stencil to a purple barrel. The couple used the barrel to collect socks for the needy in memory of their son, Ben.

Volunteers set out purple barrels in Jefferson City and California this weekend, hoping to remind donors to provide new socks for the needy.

Organizers created Gentle Ben's Socks for the Homeless in memory of Benjamin "Ben" Miller, a bear of a man who died at age 34 in 2017.

Ben was known to be a gentle soul and loved to help people less fortunate than him. He never looked for recognition.

His friends and family wondered what they could do to memorialize him.

"We had to do something because we couldn't continue grieving for him at that level," said his mother, Janet Miller. "He always had this philosophy from our family - from our grandfather - if you had a positive impact on someone else's life, your life has not been in vain."

Then they realized they could conduct a sock drive, she said.

Ben loved new socks - and especially loved the feel of new socks on his feet. He thought there was nothing like the feel of a brand new pair of socks. During birthdays and holidays, he'd open gifts, and - if there were ever an event in which he didn't receive socks - would look around in disappointment for his favorite gifts, she said.

The idea came late last year, the first year for the effort. They hoped to receive about 500 pairs of socks through donations. However, in a little more than two weeks in December, the group received 865 pairs.

The group gave the socks to The Salvation Army Center of Hope in Jefferson City.

Gentle Ben's Socks kicked off its campaign a little earlier this year, starting with a dinner in August, Miller said. The group set a goal of receiving 2,000 pairs of socks. It has since received more than 500 pairs of socks and about $500 for the purchase of more, she said.

Ed Miller giggled as he did it. "Ben loved purple," Ed Miller said. "But he hated yellow."

"(The) Salvation Army (of Jefferson City) will receive the first 1,000 pairs," Janet Miller said. "The veterans' shelter in Columbia gets the second 1,000."

New socks will be accepted for men, women and children.