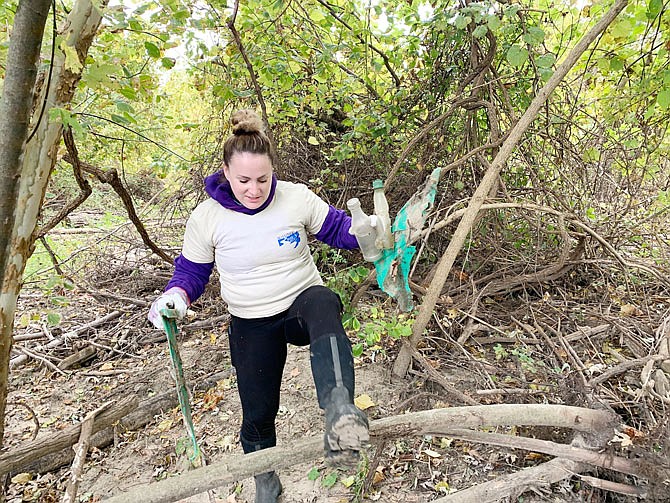 Hosted by the Missouri River Relief, the river cleanup started at Wilson's Serenity Point at Noren Access and ran 5 miles up and down river. Around 200 volunteers showed up, bundled up against the cool fall morning and light rain.

After an orientation, which included safety information and background on the importance of keeping trash out of the water, volunteers were given life jackets and split into groups to load onto boats.

There were around 25 locations volunteers were sent, chosen during a trash scout Friday by Missouri River Relief, operations manager Kevin Tosie said.

Sammy Gerb came to the cleanup with a small group from Columbia. Her team - named CoMotion - was sent down the river to a location on the south bank near Jefferson Landing and the train tracks.

Gerb and her group are part of a veterinary residency program that does team bonding activities about once a month, occasionally doing community service events. Last year, Gerb was involved in a trash cleanup near Boonville.

"It's really awesome," Gerb said. "I love doing this. As weird as it sounds, I love picking up garbage."

At their site alone, CoMotion was able to collect enough trash to fill several trash bags, along with some larger items they couldn't bag up - three tires of different sizes, a large piece of an unidentifiable outdoor toy, a pile of different sport balls, and an unbroken, 3-foot florescent tube light bulb.

CoMotion wasn't the only team to find some "treasures" in the trash. There was even a Trash Contest after the cleanup, with categories like Most Fashionable Trash, Best Muddy Ball, Weirdest Trash and Most Likely To Be Used as a Weapon.

Entries for the Most Useful Trash included an entire cooler, a foldable lawn chair, various tires, a toy firetruck and a pile of light bulbs.

Kate Kacena, a University of Missouri student, was also on team CoMotion. The oddest thing she found was a child's yellow sled she spent about 10 minutes digging out of the sand.

"I was a little disappointed, I wanted to find something weirder," Kacena said with a laugh.

For Kacena, who recently added a minor in service learning, being able to volunteer to clean up the river was a good feeling.

She lived in Germany for a few years growing up, and she said living in Europe caused her to become more interested in being environmentally conscious.

"At the point we're at now, I feel like the science is there that climate change is happening," Kacena said. "I feel like even if the things you do are little to help, they still matter, especially if everyone is doing little things. Maybe it won't solve everything, but if everyone could do a little bit, it helps. I'm just trying to do my little bit."

Kacena and the other volunteers may be doing a little bit individually, but all together, events like Saturday's cleanup can collect tons of trash - literally.

Tosie said the river cleanup events, which are held around four times a year, typically generate 3-6 tons. He didn't have an exact number of how much trash Saturday generated, but he said during the trash scout Friday they estimated they'd collect several tons.

Some locations, like where CoMotion was dropped off, had more trash than others. Those sites were high-priority for cleaning.

Steve Schnarr, director of Missouri River Relief, gave the orientation before the crews went out in the boats. He said it was possible the recent natural disasters in the area had created more trash.

"Most of the trash we find on the Missouri River has washed in from somewhere else," Schnarr said. "The tornadoes here this year have brought in a lot of trash as well - through the air."

Schnarr pointed out that, across the river from Noren Access, was one of the water plants for Missouri American Water, which provides a lot of the drinking water for Jefferson City from the Missouri River.

"Over 41 percent of Missourians get their drinking water from the river, so it's pretty important that we take care of this amazing drinking water source," he said.

A large portion of the trash found in the river, typically about 60 percent, can be recycled, according to MRR. After the trash was hauled in by boat from the different sites, it was loaded into a truck and taken off to the recycling center, where crews sorted out recyclable materials from the rest of the trash.