HALO to provide place for boys to call 'home' 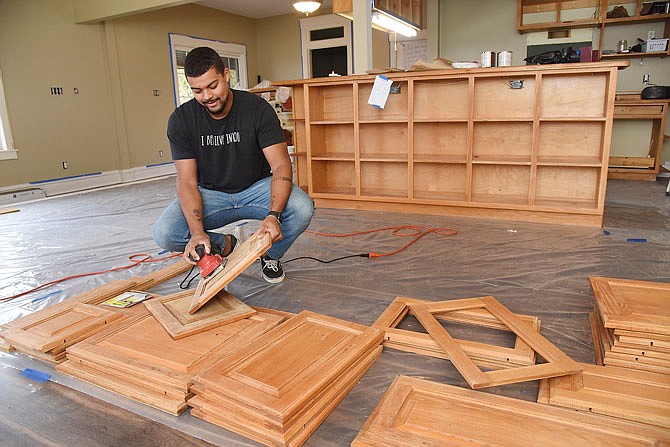 Darian Pruitt, who'll serve as program manager for the HALO boys' home, has been involved in the remodeling of the house to serve young men who need tutoring assistance and a positive and safe place to go after school.

When HALO will be able to receive clients at its new after-school home for boys is a bit of a moving target.

The organization has the site and a program manager - Darian Pruitt, who, with his wife, will live at the home.

And, for months, volunteers led by members of the local Lions Club have been remodeling the home, making it as comfortable as possible. They had hoped to be finished in October. Now, they are shooting for November.

The cottage has a private area for the Pruitts and a large dining and common area. At least two other rooms will be available for tutoring and computer areas.

Just like at the HALO (Helping Art Liberate Orphans) home for girls, the boys will be expected to attend family-style dinners and to complete assignments or chores, founder Rebecca Welsh said.

HALO is a 501(c)(3) nonprofit organization that supports homeless and at-risk children. It has branches in Jefferson City; Kansas City; New York City; and Portland, Oregon, but reaches around the world.

As she walked through the new boys home last week, Welsh said she's known Pruitt's work for six years. He was the youth minister at Capital City Christian Church.

"Darian's got a lot of experience working with at-risk kids," she said. "He's just so great with the kids."

The new boys' home in the Jefferson City area needed some tender loving care. It had to be "opened up a little bit," Welsh said.

Knowing there would be at least five teenage boys coming to the house after school every day, volunteers removed the carpet and installed laminate floors. They installed new lights and painted. They created the space where the Pruitts can close off their own private area from the boys.

And there's room for the boys to breathe.

The house sits on about 6 wooded acres. The site has a large covered carport, an area for a small outdoor basketball court and a two-car garage, which will be used as a workshop, where the boys can work on projects.

Pruitt has already lined up a number of volunteers who can teach the boys carpentry or other skills.

"For us to have kids here, we needed to do some work - opening it up and brightening it up," Welsh said.

Pruitt has identified several possible clients as the first group of boys who will be welcomed to the home.

He said he's had a lot of experience working with children.

"I've been going to the high schools for lunch, and the athletic directors and some teachers know I'm coming, so they say, 'Hey, go meet Darian Pruitt,'" he said. "And they seem to be pretty excited about the program."

HALO has been conducting programs for boys and girls in schools in Jefferson City for years, Welsh said. The children would go out to the HALO home for programs focused on life skills.

"It was then that we realized we needed something more in-depth for boys," she said. "Obviously, we have the home for girls in Jeff City, and we always have a waiting list."

The boys' program has been a need for a long time as well.

Teachers and coaches tell HALO staff there are boys who don't have a stable, safe place to go at night, Welsh said.

The boys will arrive at the home after school, probably around 3 p.m., and remain until about 8 or 9 p.m., so they'll be occupied at times when they are usually at the most risk.

"They will come here and get a warm meal, and we'll create kind of a family atmosphere," she said.

There will be mentoring, tutoring and programs that will give the boys chances to bond with adults.

"It's important for boys to have that model behavior so they can make a big change in their lives," Pruitt said. "We have volunteers and mentors in every field. The last meeting that we had, we had people who do construction, people who work in schools, credit card processing and police officers."

There were also a lot of teachers.

It's good for the boys to see the teachers outside the classroom, he continued.

Lincoln University is interested in sending students to the home to provide some tutoring, Pruitt said.

HALO is to start with boys ranging from ninth through 12th grades.

Opportunities to volunteer with HALO arise every day. To find out how to help (with either the boys' or girls' programs) email Kelli Jones at [email protected]

For the boys' program, email Pruitt at [email protected]

"It's always a really great thing to share the stage with women who are making an impact," she said. "It's so inspiring for me to hear their stories and discuss how we can make an impact together - and help kids in need all over our country."

While in Los Angeles, Welsh shared the story of a Jefferson City woman who went from being a HALO kid to supporting her daughter and maintaining a job for three years.

"She's really broken the cycle of poverty. And her biggest accomplishment is that her daughter's now 6 and happy and doesn't have to go through what she went through as a child," Welsh said. "That's the goal of HALO."

Howard did a short piece on HALO.

"It catapulted us into the national spotlight. We were able to make relationships with people who we would never have been exposed to before," Welsh said.

The relationship with Moroccanoil continues. Welsh will travel to New York to attend a panel with Howard. Clothing designers Veronica Beard will contribute 10 percent of sales from one clothing line in November to HALO.

"It's really great when corporations are committed to that thing, spreading the word," Welsh said.