Heisinger Bluffs honors its veterans with their own space 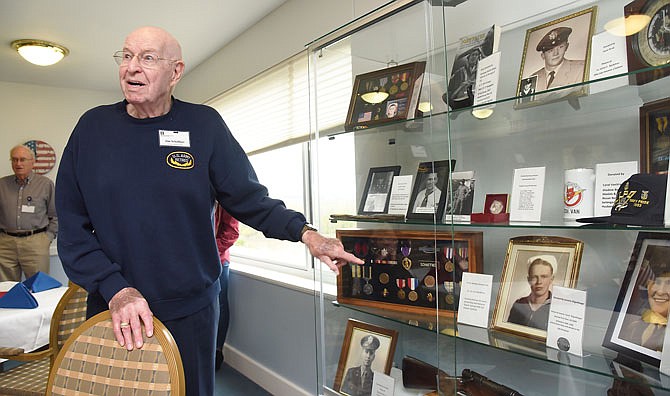 Heisinger Bluffs resident Jim Schaffner talks about his contribution for the display case in the Veterans Honor Room at Heisinger Bluffs. He and fellow residents who also are veterans were on hand as the Veterans United Foundation presented a check to help pay for current and future renovations to the room. Schaffner spent 30 years active duty in the U.S. Army and National Guard where he retired as lieutenant colonel after serving in World War II and the Korean Conflict.

Military veterans and their spouses make up a good portion of the population at Heisinger Bluffs assisted living facility in Jefferson City.

So it was natural that Rita Rivera, the facility's director of lifestyle enrichment, suggest they get together for coffee at least once a month.

That first social event, which drew six or seven veterans, blossomed into development of a regular club, which began meeting monthly for meals. And it inspired creation of a space veterans can call their own - the Veterans Honor Room.

"A bunch of us old fogies get together for lunch," said Bill Buehrle, a U.S. Navy veteran.

"Have you ever seen a military guy who was not hungry?" asked Paul Hofius, another Navy veteran.

On Friday, as the veterans club held its 10th consecutive monthly luncheon, it was joined by folks from the Veterans United Foundation, who presented a check for $5,000 to the facility to help with expenses in creating the space. The foundation is fully funded by donations from Veterans United Home Loans employees and uses revenue to enhance the lives of veterans.

"This was a no-brainer," said Jewell Simms, a foundation committee member.

U.S. Army veteran Jim Schaffner said the site was just a plain white room until work began on it. Workers painted the walls blue and gray and hung the military branch's service insignia (purchased by three of the veterans) on one wall.

"We're hoping to get carpet that would be more appropriate for this. (The existing carpet has a leaves design.) We're hoping to have a wall to separate the kitchen area," Schaffner said.

Calvary Lutheran High School students Grant Going and Sam Hoff, both 16, are building a bookcase for the room. It will be a permanent place for the veterans' scrapbook.

The boys had to pull off that project briefly last week to build ramps for a veteran who has a home in Osage Bluff.

"When we first started with this room, it was the color of the outside hallway, had old pictures on the walls and (contained) an old credenza," Rivera said.

Then VFW Post 35 in St. Martins donated $500 to the Veterans Honor Room. That was soon followed by a $1,000 grant from a VFW organization based out of Kansas City.

The very first thing the club bought was a Veterans Honor Room sign. The men said they liked it.

"One of the big things that we first bought was our display case. I could not wait to get some of the men's things and their pictures up there," Rivera said.

That was another way of getting veterans' wives and widows involved, Rivera said. Several have come forward with items they wanted displayed to memorialize their husbands.

The first meeting was a few veterans sitting in a group eating danishes and drinking coffee. It didn't take long for one of the veterans to suggest they get a guest speaker.

Rivera thought of Jeremy Amick, a local resident who writes about military history. Amick has written about several of the veterans in the facility.

Rivera realized coffee and danishes wouldn't work for a speaker, so she suggested a pizza party and sent out invitations.

"Boom, the room was full, and we had to add tables," she said. "The men were able to bring their wives, who served at home."

Military spouses don't get the recognition they deserve, although they went through about as much as the guys, said Lloyd Parr, a Navy and Air Force veteran.

Having wives and husbands together crowds the room a little bit. But it gives the women a chance to share their stories with the men.

Rivera is now creating a ladies' group, which can do outreach for residents of the care center at Heisinger Bluffs.

Additionally, some of the veterans have visited with others in the skilled nursing area at Heisinger Bluffs. Rivera said she'd like to make that a regular effort by the more-active veterans.

"Our veterans here are so humble - they appreciate everything that you do for them," Rivera said. "Jim (Schaffner) and Paul (Hofius) and Bill (Buehrle) are the ones that purchased these insignia. It touched my heart so much. Bill told me, 'We're veterans. We want to help. That's what we do.'"