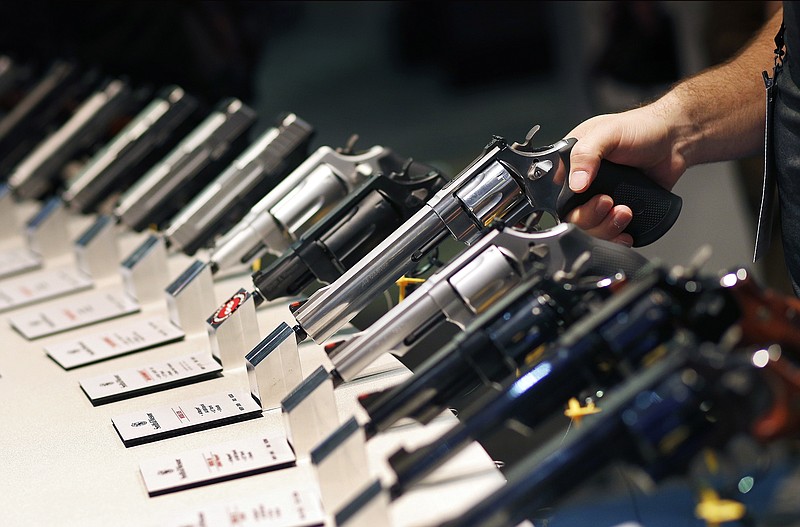 FILE - In this Jan. 19, 2016 file photo, handguns are displayed at the Smith & Wesson booth at the Shooting, Hunting and Outdoor Trade Show in Las Vegas. (AP Photo/John Locher, File)

One of the initiatives, Safer Homes Collaborative, sends part-time field coordinators to hundreds of gun shops, pawn shops and firearms training facilities across the state. The coordinators, who are gun owners themselves, ask the retailers to display educational materials and provide temporary storage of firearms. The retailers also are asked to complete a one-hour training to identify potentially suicidal customers and delay the sale of a gun or encourage safe storage.

With gun safety a hot button political issue across the country, coordinators say some people are suspicious of their work, the St. Louis Post-Dispatch reported.

"The perception is that this is gun control," said Katie Ellison, the collaborative's director. "Another challenge falls under the fear and stigma categories. They say, 'I'm here to sell a firearm, I'm not a mental health professional. This is not my expertise.'"

Joe Gilbert, who manages a gun shop in Columbia, was skeptical when he was approached about the Safer Homes Collaborative last winter. The coordinator who visited his store, Kurt Dudenhoeffer, asked Gilbert to post educational material containing 10 rules of safe gun handling written by the National Shooting Sports Foundation. But the group adds an important 11th suggestion: Consider temporarily storing a weapon somewhere outside the home if someone living there may be suicidal.

Gilbert said he joined the effort after his research found the Safer Homes Collaborative didn't lobby, legislate or protest. Eventually he became a board member, took the training and is now a trainer to help others spot potentially suicidal customers.

"It's just about reducing access to lethal means when a person is at risk," Gilbert said, "and that is something I agreed with wholeheartedly."

Similar programs exist across the state, including a collaboration between the Eastern Missouri Chapter of the American Foundation for Suicide Prevention and the NSSF, a trade association. The two groups have developed educational materials and a website to help retailers understand suicide and encourage firearms storage options.

Research shows many people think about suicide for a long time but act impulsively, and the likelihood they will kill themselves increases dramatically if they have access to weapons during weak moments.

Research indicates having a gun in the home when someone is contemplating suicide is one of the biggest risk factors for a fatality, said Dr. Bart Andrews with Behavioral Health Response, which provides mental health crisis services in the St. Louis region. "The data is overwhelming. Guns don't make people suicidal, but people who are suicidal who have access to firearms are a lot more likely to end up dead than people who are suicidal who don't have access to firearms."

Missouri has the 13th highest suicide rate in the nation, and suicides have increased by 53.5 percent in the last decade, according to state data released last month. More than a dozen studies show access to firearms triples one's risk of death by suicide, not just for the gun owner but for everyone in the household.