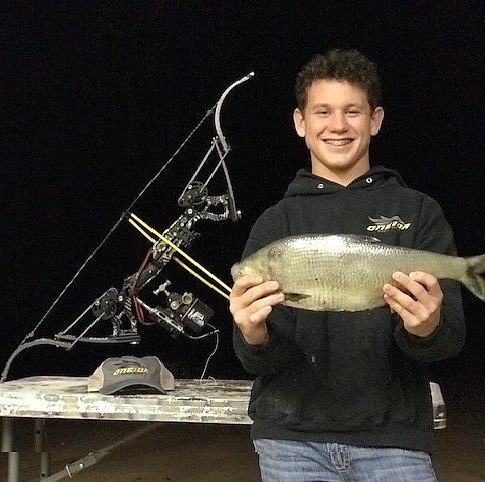 Jacob Morgan, of Rogersville, now holds a state record title after shooting a gizzard shad on the Bull Creek arm of Lake Taneycomo, according to a Missouri Department of Conservation news release.

Morgan was bowfishing when he shot the 2-pound, 13-ounce fish June 6.

Though Morgan shot the shad over the summer, he kept it in his freezer until just recently.

"When I shot it, I just thought, 'Oh my gosh, that's a huge shad!'" Morgan said. "My friends and I have always gone through Bull Creek and see massive shad. I did know it was a state record because we weighed it with one of our own scales. But honestly, I kind of forgot about it in the freezer until we had it weighed on a certified scale."

The shad was weighed on a certified MDC scale in Taney County on Oct. 4.

"Many people may not realize a fish doesn't have to be alive when we certify it for a state record," MDC Fisheries Programs Specialist Andrew Branson said in the news release. "If the fish has been frozen, such as in this case, we require the fish is thawed for an accurate weight."

Morgan said he doesn't have plans to mount the shad, but still thinks it's an accomplishment to hold a state record at his age.

"It's definitely exciting - especially being only 16," said Morgan. "My friends and I always have little competitions with each other to see who can catch the biggest fish, so I definitely have bragging rights now."