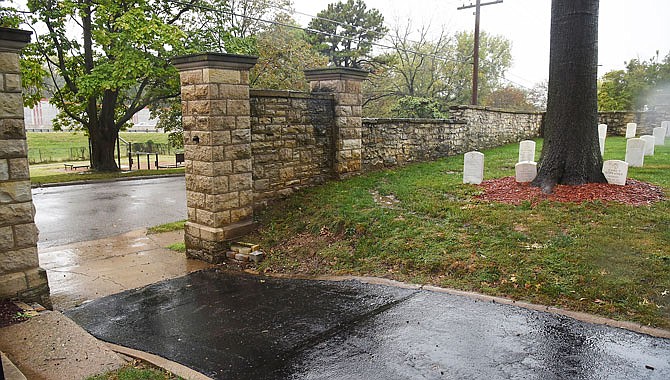 A group of local and state representatives wants to expand the Jefferson City National Cemetery, and their plan to do so involves relocating East Miller Park across U.S. 50.

The cemetery, at 1024. E. McCarty St., sits on 2 acres next to Woodland Old City Cemetery and across East Miller Street from East Miller Park.

The veterans' cemetery is out of space.

Burials at Jefferson City National Cemetery began in 1861, and it was officially designated as a national cemetery in 1867 following the end of the Civil War. At the time, approximately 350 interments had been completed.

In 1996, the cemetery ran out of sites for cremated remains.

The cemetery now has 1,792 white granite headstones and is closed to new interments. The only interments accepted now are subsequent interments for veterans or eligible family members at existing gravesites.

Lobbyist Tom Rackers, along with Jefferson City veteran Leon DeLong, presented the plan to the Jefferson City Parks and Recreation Commission on Tuesday. Mayor Carrie Tergin and state Reps. Dave Griffith and Rudy Veit were in attendance to show their support for the proposal.

The idea is, in order to expand the cemetery, East Miller Park could be moved to the other side of U.S. 50, which runs alongside the park.

There is a green space on the other side - along East Elm Street, roughly between Clark Avenue and Chestnut Street - which is currently vacant and owned by the city that is the proposed site of the new park.

Chris Leuckel, president of the Parks Commission, said the land on the south side of the highway is approximately the same size as the existing park, but it's longer and more narrow.

After the presentation to the commission, Leuckel said he decided to form a committee to look into the possibility and keep up with the process. Parks commissioners Brad Bates, Bob Weber and Karen Brickey make up that committee.

"I felt they deserved our best effort to determine if we can do it," Leuckel said.

Rackers said they've spent two years working with groups like the Missouri Veterans Commission and looking for options to build a new veterans' cemetery in the area. However, it became obvious that would be an expensive solution.

"To find something that's available and accessible in Jefferson City would cost an awful lot of money, not only to purchase but develop it," Rackers said. "We looked at a number of properties, and it would just be out of sight."

The land that is currently East Miller Park would add approximately 2.5 acres to the cemetery, allowing them to double the number of graves. Rackers said they felt the land was the ideal place because it would keep the cemetery in one place and would be a benefit for the area, as well.

Moving East Miller Park across the highway would bring it closer to the neighborhood along East Elm Street. Currently, if children from that area want to go to the park, they have to cross the highway at Chestnut Street.

"We just felt it was an ideal place for those families to have their children where they could see them and have the park and the equipment that they could utilize," Rackers said.

In 2018, the Jefferson City Parks, Recreation and Forestry Department developed a master plan focusing on the next 10-20 years of improvements to the parks system. At the time, East Miller Park was priority No. 2, behind Community Park. Estimated costs for new playground equipment and other improvements were about $3 million.

East Miller Park currently has a playground, fitness stations, horseshoe pits and a paved fitness loop, along with picnic tables, grills and a basketball court. The planned improvements included a new playground themed around first responders because of the nearby fire station, along with a sound garden, new concrete trail, memorial plaza, half-court basketball court and new shelters.

Since 2018, the park has lowered in priority and isn't part of the first stage of park improvements, which includes Community Park, Ellis-Porter Riverside Park and McClung Park.

Leuckel said the commission hopes to make improvements to other parks, including East Miller, in the next phase.

"There's certainly a need," he said. "We want to provide a park in that area, whether it's on the north side or the south side of (U.S.) 50. We're committed to that."

This is still all just a possibility, not a plan. The presentation to the Parks Commission is the first step of a process that could take years, Leuckel said.

The U.S. Department of Veterans Affairs, which regulates national veterans' cemeteries, would be given the current park for the expansion. Funding through the VA would also need to be acquired.

There are several state cemeteries, the closest being in Fort Leonard Wood, which is open for burials. But at almost 70 miles away, Rackers said he feels that's not close enough for Jefferson City veterans or their families, especially for older family members to travel.

"We owe it to the families and the veterans to have a local place where they can feel comfortable going, and be buried," Rackers said. "These are people that made it possible for us to enjoy and worship and live and raise our children. It's just very important."

For those involved, it's about continuing to provide a place for Jefferson City's veterans and their families. At the commission meeting, DeLong gave some of the cemetery's history and reminded the commission of how long the cemetery has been closed.

"In 1969, a lot of our World War II veterans that are entitled to their benefits were in their 50s and 60s, so a lot of those guys have passed after the cemetery was closed, and there's no place for them to go, as far as a national cemetery," DeLong said.

DeLong added the same would be true for veterans of Korea, Vietnam, Desert Storm and other conflicts that have happened in the years since it closed.

Being buried in a national veterans' cemetery, as opposed to a state-owned cemetery, is important to many veterans, DeLong said, despite the benefits and maintenance being essentially the same.

Burial benefits include opening and closing of the grave, concrete grave liner, a granite headstone or marker, burial flag and Presidential Memorial Certificate, along with perpetual care of the site, all at no cost to the family.

If this project moves forward, Rackers said, they would also hope to build a columbarium wall where cremated remains could be interred, which would allow a smaller space to serve more veterans and their families. Cremation and interment of cremains are also provided for veterans at no cost.

Although the project is in early stages and no official decisions have been made, Leuckel said, the Parks Commission is willing to consider the idea.

"For us to have an opportunity to become partners with them through that presents a wonderful opportunity," Leuckel said. "It's just a matter of trying to figure out if we can make it work."

Rackers is hopeful they can work something out.

"The bottom line is, this is the only option we have," Rackers said. "It's the only one that makes sense."