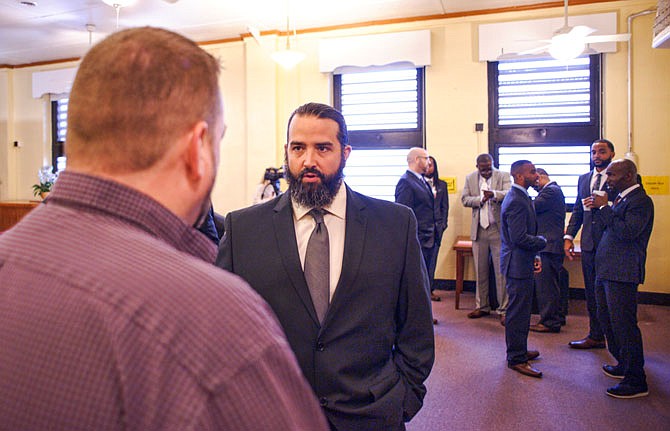 He was still a teenager when a violent crime landed Antuane Waddy in a Missouri prison.

First-degree assault. It's something he regrets. And that he's paid for.

"The situation got the best of me," Waddy said.

The Parole Board has agreed Waddy has served his time. He'll be released soon from Algoa Correctional Center.

But it's been proven time and again that simply releasing prisoners without giving them the tools they need to be productive members of society is a recipe for disaster and for recidivism.

So Waddy was selected to be a member of the inaugural group of a dozen men entered in the Urban League of St. Louis' Save Our Sons program. The 12 men - as they neared release - received four weeks of what organizers described as intensive life skills, cognitive improvement and employment readiness training.

The Urban League of St. Louis brought experts into the prison to provide the training and encourage the men to prepare for life outside the prison's walls.

Urban League will make resources and community programs available to the men and help them continue to make strides in their new lives, according to Jamie Dennis, director of SOS St. Louis.

SOS is intended to help economically disadvantaged men living in the St. Louis metropolitan community to find jobs and have opportunities to earn livable wages. It helps participants learn basic life skills, such as filling out job applications, interviewing and maintaining a strong work ethic.

Waddy has stayed busy and been a model offender. He has sought numerous chances to work, learn and help others. He has trained dogs for adoption through the Puppies for Parole program; served as a daily living assistant - helping other offenders who have medical conditions or disabilities - practiced meditation, anger management and sobriety; and earned a diesel mechanic certification.

"If you have a good, strong work ethic, you can succeed," Waddy said. "I hope and strive to be the best I can be."

When he's released, he hopes to get into work repairing diesel engines.

The Urban League can help him with that, too, Dennis said.

"It's a total community effort to help these guys," Dennis said. "And it's not just these guys. I've been going to their families' houses, providing food, assistance and help with utilities."

If you make their home lives more successful, it lessens the chances they will go back to a life of crime, Dennis said.

The men underwent extensive interviews before entering the four-week program - to test their willingness to change and to better themselves, according to a Missouri Department of Corrections news release.

Organizers hope the men will act as mentors for future SOS program classes at Algoa.

The program is helping to fill the increasing need for more intensive re-entry programs, according to Algoa Institutional Activity Coordinator Meryl Miller. He, Functional Unit Manager Matt Klumper and Dennis - a long-time fixture of career and resource fairs at Algoa - teamed up to create the prison SOS course.

"The power for successful programs comes through partnerships," Miller said.

The nature of SOS is a brotherhood among participants and their mentors, Dennis said during a ceremony presenting the men certificates marking their completion of the program.

"I'm surrounded by a lot of talent - a lot of wisdom," he said, referring to the 10 men who stood for graduation. (One was transferred out of Algoa shortly after the program started and one just after completing the program.)

"CIA" - credibility, integrity and accountability - has been drilled into the men, Dennis said.

He promised his job wasn't done until he could place the men in gainful employment.

"If you've been going through adversity, there's no overnight fix," he said.

John Dawson III, of Sedalia, said he enjoys working in sales. So the challenge, in December when he is released, will be finding a job in that field.

The 40-year-old man said before he landed in prison, he'd been addicted to heroin, committed other crimes and spent years bouncing from job to job - unable to hold a job for more than six months.

While in Algoa, he found more focus.

He worked in the Puppies for Parole program, which through partnerships with animal shelters and advocate groups takes dogs out of shelters, trains them and prepares them for adoption.

Dawson climbed to lead dog trainer in the program.

And he would like to train dogs once he's released. First, though, he's focused on a sales job.

"I've learned about networking and résumé-building," he said. "And I've been able to make myself employable."

As Dawson prepared to receive his certificate, Deputy Warden Scott Weber spoke to him about the program.

"I told him I want him to continue that success," Weber said. "Be a role model for the rest of the population while he's still here."