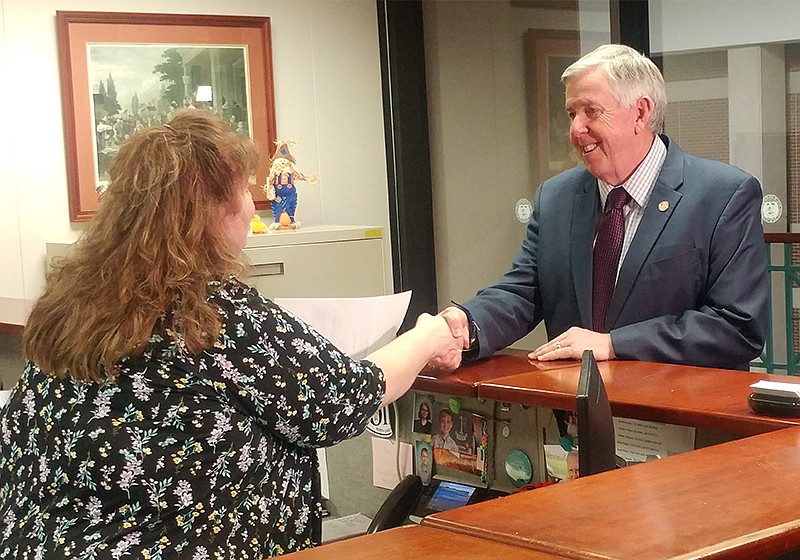 Dee Dee Straub, election support assistant at the Missouri Secretary of State's office in Jefferson City, said the presidency is the only office that opened for filing Tuesday.

The filing window for a presidential candidate to appear on the March primary ballot will close at 5 p.m. Dec. 24. As of about noon Wednesday, 13 candidates had filed - 11 Democrats and 2 Republicans - according to online records from the Secretary of State's Office.

Leonard J. Steinman II and Velma Steinman, both of Jefferson City, filed between Klobuchar and Biden. Leonard has previously run as a U.S. Senate, Missouri governor and U.S. presidential candidate, among other offices.

Velma has previously run as a candidate for a congressional office, among other offices. When she ran for Congress, she ran as a Democrat, while Leonard, her husband, ran as Republican in the primary. Rep. Blaine Luetkemeyer prevailed in the primary and general election.

Candidates will appear on the presidential primary ballot in order of randomly drawn numbers.

In the case of incumbent Republican President Donald Trump, Missouri Gov. Mike Parson filed for him, after the Trump campaign reached out and asked him to do so, Parson said.

"We were more than happy to do that. We were proud to do that. I've been supportive of the president all along," Parson said, adding that "with (Trump) on the right track for this country, I think he's truly trying to do good things for this county, and I'm going to totally support the President of the United States."

Parson added he is the Trump campaign's chairperson for Missouri.

Parson credited Trump's leadership, and his own and others' leadership in Missouri, for what he called an economic boon that's benefiting employees and businesses.

He wanted to stay focused on economic issues, and was dismissive of the impeachment inquiries on Trump, and the concerns at the heart of the inquiries - calling it a "political dogfight."

Chrissy Peters, director of elections with the Secretary of State's office, said filing for all statewide offices - except for auditor, which won't be open for election until 2022 - begins at the end of February.

In terms of the 3rd Congressional District - which includes Jefferson City and parts or all of Callaway, Cole, Gasconade, Miller, Osage and Maries counties - Luetkemeyer, the Republican incumbent, and Democrats Katy Geppert and Dennis Oglesby have campaigns for the position, according to the Federal Election Commission.

Peters said the filing fee for the U.S. presidency costs $1,000, which goes to the political party of the candidate, unless they're an independent candidate.

Trump has had the most receipts of any presidential candidate for the 2020 election, at more than $165.3 million, according to the FEC. Sanders leads the Democratic candidates, at $74.5 million, followed by Warren at $60.3 million and Buttigieg at $51.5 million.

The nine Democrats from outside Missouri who have so far filed for Missouri's primary together have received more than $346.7 million. The Steinmans' presidential campaigns were not yet part of the FEC's data.

More information for candidates from the Missouri Secretary of State's Office is available at sos.mo.gov/elections/candidates.