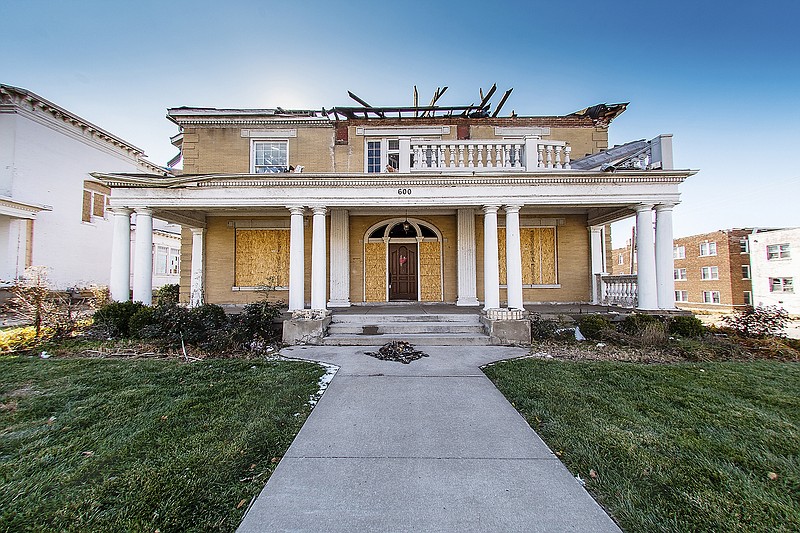 The debris is gone, but the Dallmeyer House at 600 E. Capitol Ave. looks similar to how it did immediately after the storm. The historic house is scheduled for demolition.

A sycamore tree stood tall near the corner of East Capitol Avenue and Lafayette Street for roughly 120 years.

It was the only tree on city right-of-way left where it had taken root when the city replanted trees along Capitol Avenue's sidewalks two years ago.

A stump measuring more than a yard across, shaved close to the ground, is all that remains of the once towering tree, the only one on city right-of-way felled by the May 22 tornado on Capitol Avenue.

Now six months in its wake, the effects of the EF-3 tornado that took only minutes to blow through Jefferson City continue to branch across the community, touching the lives of residents who may or may not have felt them in the morning light of May 23.

The tornado damaged nearly 500 buildings in city limits and another 145 in unincorporated Cole County, according to data from Jefferson City Building Official Larry Burkhardt.

As of Oct. 8, the city expected 51 of the 491 damaged structures to be demolished - 15 already had been, with demolition permits issued for another 12.

The city has issued 205 building permits for repairs related to tornado damage as of Nov. 12, with the repair work valued at more than $6.2 million.

Recovery for the people and places whose images following May 22 backdropped Jefferson City's experience of the tornado - from glass-strewn car dealership lots to the battered homes of a historic district burgeoning on revival - remains in varying states of progress across the city's new landscape.

As the tornado neared city limits along U.S. 54 just south of Missouri 179, it left its first scar on the city's horizon as it scattered the contents of the Braun Storage units and destroyed the Donnie Braun & Sons Auto Repair shop.

"The rebuild process is very slow," Alan Braun said last week. "We have a construction company working on plans for rebuilding our shop, but everything is just very, very slow. Even the reconstruction of our storage units is kind of going at a turtle's pace."

The tornado damaged all 11 buildings on the Braun complex. It destroyed three storage buildings and the auto shop.

"Every electrician, every drywaller, everybody that has a hand in what needs to happen down here is just so busy with the whole community and everybody that needs help," Braun said. "It's going to take some time to get everything rebuilt. I thought it would be a year, maybe two tops, but it looks like it could be longer."

A few miles farther up U.S. 54, as the tornado entered Jefferson City along Christy Drive, the winds ripped the roof off the Special Olympics Training for Life campus and smashed vehicles on the Riley Chevrolet and Toyota sales lots.

A sign on the roof of the Special Olympics building now proclaims "Back in 2020," and the Riley Toyota dealership is back in business. However, nearby Capital Bowl at 2017 Christy Drive folded five months after the tornado as the owners initially started repairs but ultimately decided the collapsed wall and heavy water damage were too much to come back from.

"I think we're old enough that it's not something that we want to tackle again," said Tom Mendenhall, whose ownership group bought the bowling center in 2007.

He hopes it's not truly the end for the bowling alley - Jefferson City's "working man's country club," as he called it - which first opened as West Gates Lanes in 1961.

"We're going to go ahead and sell all the land and the building as it is," Mendenhall said. "It would be nice if somebody came in and took it over."

The loss is more than a building to Jefferson City area bowlers.

"People are going elsewhere or they're just not bowling," said Kim Wade, manager of the MO Capital Area chapter of the United States Bowling Congress, whose office was housed inside Capital Bowl. "A lot of people just aren't bowling."

Wade, who has been involved with the bowling alley since working in its nursery in the late 1970s, estimates leagues hosted at Capital Bowl still accounted for 600-700 bowlers across six nights a week.

"Five hundred of those people are not bowling. Probably only 100-200 are going somewhere else to bowl," she said. "Usually we have membership of around 1,000 members, and right now, we're sitting around 500."

The bowling alley offered a family-friendly entertainment option as well as a revenue stream for other local businesses, Wade said.

"Since 2011, we had a youth tournament that brought in close to 2,000 youth plus their parents," as well as adults' open, mixed and senior tournaments, she said. "It was a moneymaker for the city. All those people ate and drank in the city."

As the tornado reached Ellis Boulevard, it broke out windows, mangled fast-food restaurant marquees and tore up apartment buildings at the Hawthorne Park complex.

And the residents of 144 Hawthorne apartment units across 18 buildings have moved on as their former homes await repair or demolition. The city issued demolition permits for eight of the buildings Nov. 8.

While Hawthorne Park intends to replace the damaged apartment buildings, their absence is contributing to an already tight market for affordable housing in Jefferson City.

Along Tanner Bridge Road and streets branching from it - Aurora Street, Mesa Avenue and Holiday Drive - piles of debris have been replaced by piles of raked leaves. A few topped trees stand like scarecrows, some with late-autumn sunlight shining through bony limbs and some missing limbs all together on one side. Roofing contractors' signs dot front yards of homes where the pieces have been put back together, advertising their services for homes where they haven't been.

Around Jackson Street, it's hard to tell if the partial skeletons of a few blown-out houses are more visible over the hill because the trees have dropped their leaves or because there are simply fewer trees.

The tornado did some of its worst work near the end of its path, battering historic properties around East Capitol Avenue that have weathered the elements for more than a century.

For Jefferson City residents familiar with the area, the William Q. Dallmeyer House's absence might make as loud a statement as the mansion at 600 E. Capitol Ave. has since the original 1875 building was remodeled in the neo-classical style in the early 1900s.

The house's current owners, Frank and Carol Burkhead, completely restored the structure, recognizable for its second-story porch, and operated accounting firm Burkhead and Associates there up through May 22.

It was named a Jefferson City Landmark and to the National Register of Historic Places in 2005.

Its demolition permit was issued Oct. 16.

"Historic City of Jefferson is sad to see such a beautiful and historic home lost to the tornado. We appreciate the due diligence the Burkheads did to ensure there were no other ways to save the building," HCJ Executive Director Anne Green said.

"Once a historic building is gone, it's gone forever. You could take each brick for the walls and every plank that once lined a floor and recreate it piece by piece. But it would never be the same again," Green said. "This is why our community must come together to save the historic buildings that remain."

The Dallmeyer House isn't the only history the tornado has taken from East Capitol Avenue.

Part of the stone wall at the old Missouri State Penitentiary crumbled in the storm, leaving a gap flanked by vacant guard towers across from the Col. Darwin W. Marmaduke House.

Avenue HQ, an event venue that was originally the Dix Apartments built in 1905 at the corner of Capitol Avenue and Lafayette Street, was razed in early September.

And the owner of the Missouri Association of Counties' Italianate-style building at 516 E. Capitol Ave., built in 1872 by local businessman W.C. Young, has applied for a demolition permit, Green said.

The seasons have changed in Jefferson City, and they will again.

In some places where devastation took root May 22, hardy residents are sowing the seeds for a stronger Jefferson City that could flower as soon as next spring or take years to emerge.

In the same area where three historic properties will have been torn from the ground, the Historic City of Jefferson has arranged for assessments at three more that were damaged by the tornado - 518 E. Capitol Ave., 616 E. Capitol Ave. and 105 Jackson St., the Parsons House.

"All three came back as viable still," Green said. "Historic City of Jefferson was happy that we could be of help in those instances and see a few buildings that might have been demolished saved."

Repairs are underway at the Lincoln University President's House at 601 Jackson St., another historic structure built in 1913 that was heavily damaged by the tornado, with a complete recovery expected late next year.

The district intends to demolish the structures on those properties, perhaps using the land someday to add athletic facilities to the high school campus.

It's also listed the former Simonsen 9th Grade Center at 501 E. Miller St., with roof patched and windows boarded since May, as surplus property, potentially to be sold and put to some other use after its nearly 100 years in existence.

Residents continue to rebuild their homes and their lives bit by bit, and visitors to downtown Jefferson City still drive around the expansive tree stump on East Capitol Avenue.

"It's a challenge for every community, no matter what disaster they face," Jefferson City Mayor Carrie Tergin said.

Tergin and many across the city recognize the hard work is still happening, whether it's rebuilding a house or shoring up a housing crisis.

"My hope is that Jefferson City will be an example," she said. "That they will look back on this moment and this situation and say, 'Jefferson City did it right.' They were able to take the situation that had already affected housing even before and were able to come together and come up with plans and a solution."

This is part of a five-part series exploring what was lost, what progress has been made and what challenges remain six months after the May 22 tornado in Jefferson City.

TODAY: The tornado took minutes to rip apart Capital City history and to leave deep scars.
THURSDAY: Significant strides have been made by some businesses, residents and organizations; many hurdles still remain.
FRIDAY: On the six-month anniversary of the tornado, a new sense of normal is emerging.
SATURDAY: Much of the immediate focus after the tornado was within Jefferson City limits. But people outside the city still face their own challenges.
SUNDAY: A housing shortage existed before the tornado. Now, the shortage has become a crisis. What work is being done to address the need?
ADVERTISEMENT