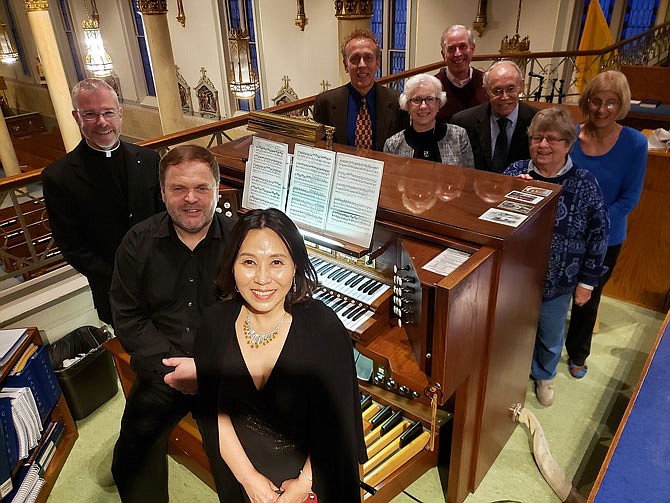 The Rev. Jeremy Secrist, visiting organist Horst Buchholz, visiting vocal soloist MeeAe Cecilia Nam and members of the local American Guild of Organists chapter stand next to the organ console in the choir loft of St. Peter Catholic Church in Jefferson City, following an Oct. 20 public concert of music for organ and voice.

Mozart proclaims the organ to be the "King of Instruments," but it actually works more like a parliament.

It reigns when its panoply of voices speak in harmony and balance, with whispers and crescendos drawing upon the full spectrum of sound and human emotion.

"There's the capacity to surround and fill the space with a volume and complexity of tone that no other instrument can match," said the Rev. Jeremy Secrist, pastor of St. Peter Catholic Church in Jefferson City.

This year, Bishop W. Shawn McKnight, of the Catholic Diocese of Jefferson City, appointed Secrist to serve as the bishop's delegate for care and promotion of pipe organs.

This new role includes taking an inventory of existing pipe organs in parishes of the diocese; advocating for their preservation, restoration and maintenance; and cultivating an appreciation for the contribution they can make to Catholic liturgies of all sorts.

"What makes them particularly well matched to congregational singing is that, like members of a choir, each of the windblown pipes produces an individually generated sound," Secrist said.

A single properly engineered set of tuned pipes, built with skill and technology acquired more than 1,500 years of organ-building, "can support and encourage singing in a way that other instruments simply cannot," he said.

"It's not just multiplication of voices or volume, but of color," he said.

Notes can be held. Harmonies can be accentuated. Voices of varying pitches, timbres and volumes can be mixed, depending on the occasion, the type of music and the people who are singing with it.

"I would liken a pipe organ to the Psalms," Secrist said. "When you go through all 150 of them - as King David sings and prays and repents and even curses - we find representation of all human emotions. And in all of those, God is able to work."

The pipe organ is "able to plug into, to enter into the soul, the heart of who we are," Secrist asserted.

Organ pipes are arranged into "ranks," each containing approximately 61 notes of the same voice and placed atop wooden wind chests filled with pressurized air.

When the stop knob that controls one of the ranks is activated, the pressing of a key or pedal allows the pressurized air to enter the pipe of the corresponding note.

The column of air vibrates inside the pipe, creating a pitch that mixes and harmonizes with the vibrations from neighboring pipes as they are activated.

"The longer the pipe, the lower the pitch," Secrist said.

Pipes of different sizes, shapes, materials and wind pressures produce a colorful palate of sounds that can be adjusted by blending the various stops.

Organs started out simple in ancient times and became more complex over the centuries.

Builders continued discovering innovative ways to construct the pipes and the intricate mechanisms that force air through them.

Mathematicians calculated the effect of thickness, radius, height and degree of tapering on the sound of each pipe.

"We believe that God is the source of everything that is true, good and beautiful, the work of our hands and the creativity of our minds," Secrist said. "That's why we strive to make the most of these things as preparation for an encounter with the Triune God, from whom all of these artistic attributes flow."

In sight and sound

Secrist remembers the first time as a child he heard someone play Bach's famous "Toccata and Fugue in D Minor" on an organ.

"I was spellbound and captivated by it," he said.

His interest continued into high school, when he learned about other great classics from the Medieval, Baroque, Classical, Romantic and Modern periods.

"From that time forward, I was bitten by the organ bug," he said. "For me, it was pure joy."

He agrees with the assertion of 20th-century Catholic theologian Hans Urs von Balthasar that people are reflexively drawn to God and the divine realities by what is first beautiful, then by that which is good and true.

Secrist spoke of having visited a little girl and her father prior to a wedding rehearsal in a local church filled with impressive artwork.

She was taken by the loftiness of the ceilings and the brilliance of the stained glass in the afternoon sun.

Then she noticed the pipe organ in the loft and asked, "What is that?"

Secrist told her the extensively stenciled instrument sounds as neat as it looks, and she'd get to hear it play at the wedding Mass the next day.

He believes all of those beautiful objects, coupled with a vibrant community of faith rooted in the Gospel and the life of the church, have the power to turn people's minds and hearts toward God.

"And there I was, seeing it in action," he said. "An encounter with something beautiful had captured that young lady and captivated her imagination."

Beginning about 60 years ago, some pipe organs were removed or heavily modified.

But in some parishes in the diocese, the pipe organ has remained an integral part of parish life.

"They don't think of it as something secondary," Secrist said. "And now we hope to provide some good direction for maintaining these instruments for future generations."

At his previous parish assignment in St. Thomas, he discovered a mostly intact, 19th-century pipe organ that had been silent for decades.

In consultation with the parishioners, an organ builder was commissioned to restore the organ mechanism and the nine ranks of pipes.

The restored 8-foot Open Diapason was the first to be reinstalled.

"I was simply blown away when I heard it play for the first time," Secrist said. "There was a richness of tone, a cohesiveness."

That's when he nicknamed that instrument "Phyllis" - a reference to Psalm 90:14: "Fill us with Your love, O Lord, and we will sing for joy!"

"That relatively modest instrument of nine ranks definitely 'fills' the church," Secrist said. "And the people started singing better with the fuller accompaniment."

Secrist led the Gregorian chant schola at the Pontifical North American College when he was a seminarian in Rome.

His membership in the American Guild of Organists, the Organ Historical Society and other organizations has kept him in regular contact with world-renowned composers, musicians, organ builders and teachers.

He was recently appointed to serve as the AGO's district convener for Missouri. This will keep him in close contact with the deans of the guild's various chapters throughout the state, helping to promote their work.

Meeting regularly with other Christian pastors in Jefferson City, he has found some common interest in the pipe organs in their houses of worship.

"Music can always be a means of bringing about greater connections," he said.

Now, as pastor of another parish with a historical pipe organ, he continues to schedule and promote concerts with the instrument as a means of fellowship and cultural enrichment.

He recently invited an accomplished organist and vocalist duo to St. Peter Church for a free performance of classic and contemporary works for parishioners and the local community.

The local AGO chapter, with members of many congregations, was well represented at the performance.

Secrist noted through the centuries, music and art have contributed significantly to the well-being of civilization and society.

Just as the Catholic Church in its mission of preaching the Gospel has drawn together people of numerous nationalities, cultures and political situations, "so, too, can music be that kind of a link between people of diverse backgrounds," he said.

He asserted music has the power to reveal love at its deepest level.

"And whom should we love more than anybody else but the Lord?" he said. "So the music that we use is an expression of that love, of the deepest longings of our heart."