Volunteers may sign up to help in Jefferson City disaster recovery 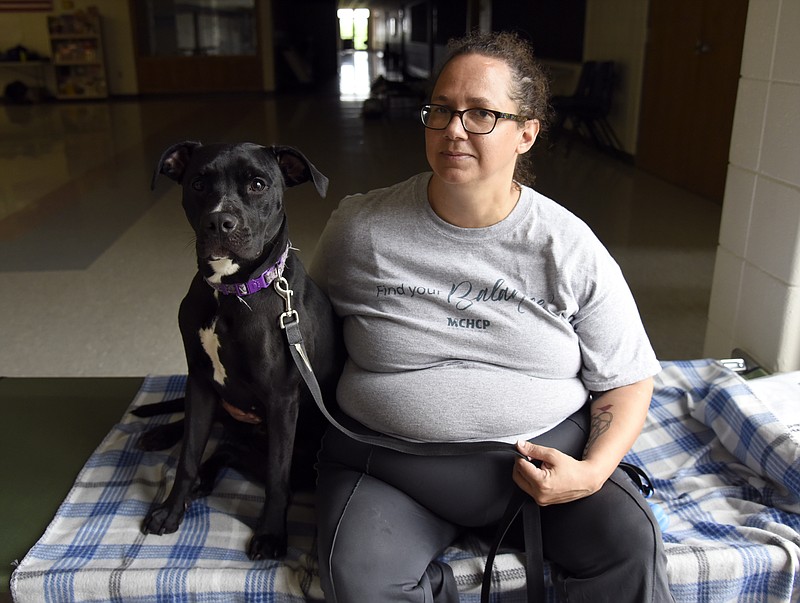 Jenna Kieser/News Tribune Liza Loughridge sits with her labrador mix, Tilly on her cot at the Red Cross shelter on Thursday at Jefferson Middle School. Loughridge's daughter was working at the Sonic Drive-In on Ellis Blvd on Wednesday night when a tornado touched down. "I felt the pressure in my ears and the loud boom," said Loughridge.

The United Way has stepped up to be the go-to resource for volunteers wishing to help their Jefferson City neighbors recover from Wednesday night's tornado.

Jefferson City officials and Cole County Emergency Management have asked people to contact the nonprofit organization to find out how to help.

People wishing to volunteer and assist with the community-wide disaster recovery efforts should visit unitedwaycemo.org/volunteer, according to Ann Bax, president of the United Way of Central Missouri. United Way is gathering names of potential volunteers and will notify them when appropriate disaster responses are identified.

"We are partnering with the city to facilitate the volunteer piece of the puzzle," Bax said. "So many wonderful people are coming forward wanting to volunteer."

But, it was still unsafe Thursday afternoon to send volunteers out. And, city officials continued to identify and prioritize projects, she said.

After the city and agency identify projects, they will email potential volunteers, who may then sign up for the opportunity.

"Do not self-deploy to the scene of the disaster," the website states. "The arrival of unexpected volunteers will interfere with initial response and assessment efforts."

And, arrival of unexpected people may put them in danger. Assistance will be needed most during the recovery period of the disaster.

The Red Cross is taking volunteers too, Bax said.

To volunteer for the Red Cross, according to American Red Cross of Central and Northern Missouri Director Abigail Anderson, visit redcross.org, and click on "Volunteer." From there, click on "Apply Now."

Once signed on, the site will ask for a zip code, Anderson said. It will ask for what type of disaster relief volunteers are searching for.

"Because this is a big event, it will be the first position in the list - titled: May 2019 Storms," Anderson said. "The Red Cross has a handful of folks processing those applications for the next few days, so they won't have the normal two-day waiting period."

Background checks are necessary for much of the work the Red Cross does.

If somebody wishes to volunteer, they should very strongly consider donating a full week of service toward the tornado relief to be certain the assignments are at the forefront of the current mission, Anderson said.

"We want to train the right people in the most efficient way - and make it really worth their while," she added.

There are other ways to help.

Text "REDCROSS" to 90999 to make a $10 donation to the nonprofit organization.

And, please, don't show up at the shelter with food or donations. People don't want to gawk, but it happens. If you feel like you should make a monetary or water donation to the Red Cross, the United Way, at 205 Alameda Drive, has agreed to accept them for disaster relief on the organization's behalf. Checks should be made payable to the American Red Cross of Central & Northern Missouri Chapter.

Wednesday's weather disrupted a number of events that were to happen in the Capital City over the next few days. Among them was the Grow With Google event at Missouri River Regional Library, in which Google folks were to train job seekers and small-business owners in digital skills. Organizers canceled the event because of the weather, but since it was a catered event and the food was already on hand, MRRL offered the food free to victims, first-responders and anyone else who wanted a free meal.

Library staff walked up the street and told cleanup crews the food was available. About 50 people enjoyed the free meal. And, some folks who lost power were able to go to MRRL and charge their wireless devices or hook up to the internet.

The American Red Cross has provided canteens (vans that deliver water, soft drinks, snacks and meals to first responders, victims or others who need them during disasters) in the affected area since early Wednesday morning, Anderson said.

The Salvation Army served 215 meals above and beyond the meals it serves every day at the Center of Hope on Jefferson Street. On Thursday, it provided canteens in the Eldon area, according to Salvation Army Major Nancy Holloway. One of the canteens is based in Sedalia. The other is in St. Louis. A third is expected to be based in Columbia to serve the Columbia and Jefferson City areas, but it has not yet arrived.

The organization is working with the Red Cross to operate two shelters for people from Eldon whom the storm displaced.

The two organizations served about 100 people Thursday in Eldon.

"The Red Cross does the sheltering and the Salvation Army does the feeding," Holloway said. "The meals are made (in Jefferson City) and taken down there."

Anyone who is hungry is welcome to go to the emergency shelter, Anderson said.

"When a lot of people think of shelters, they automatically think of a homeless shelter," Anderson said. "That's not the case at the disaster shelter."

The shelter can provide assistance victims can't get anywhere else - emotional and spiritual care, logistics, replacement of identification cards and other resources. The Red Cross can put victims up in hotels if they are uncomfortable in the shelters.

"We have a couple of pastors who provide spiritual and mental health care for victims," Anderson said. "The volunteers at the shelter know who to contact if that need is there."

For food or shelter in Jefferson City, go to the disaster shelter at Thomas Jefferson Middle School, 1201 Fairgrounds Road. Or, go to The Salvation Army Center of Hope, 927 Jefferson St.

Print Headline: Volunteers may sign up to help in Jefferson City disaster recovery