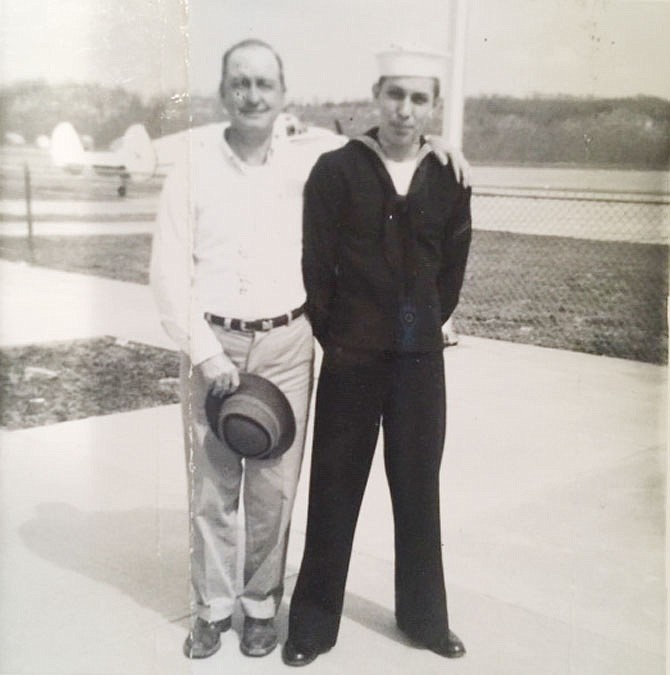 George Ousley is dressed in his Navy uniform with his father, George H. Ousley Sr., in March 1966. 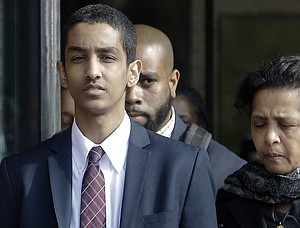 A war and a half-century of time has not stopped a local man from receiving his high school diploma.

While George Ousley said he will be proud to receive the diploma today with other Jefferson City High School graduates, he wants to let other veterans know about the same opportunity available through a Missouri program - Operation Recognition.

Ousley, 71, of Columbia, was born and raised in Jefferson City, and made the choice in high school to enlist in the Navy during the Vietnam War. He earned his general equivalency diploma in the service, but he never got to receive a high school diploma until today.

Honorably discharged after about 3 years of service that included three tours of duty to Vietnam as a machinist's mate aboard a helicopter carrier ship, Ousley earned a bachelor's degree from Columbia College, but his accomplishments never felt complete.

"That's the one thing that doesn't hang on my wall," he said last week of a high school diploma.

Not having one has always bothered him, he said; it's been embarrassing to have to say he never graduated from high school when he's been asked.

Ousley said he was part of the first class to attend JCHS, which opened in 1964, and he would have graduated in 1966. However, when he was a junior in 1965, he got his parents' permission to enlist.

"The Vietnam War was heating up," Ousley said, and he and a friend decided: "Let's go serve our country. That's what we need to do."

U.S. involvement with the conflict in Vietnam entered a new phase of intensity in spring 1965, when President Lyndon B. Johnson launched a sustained aerial bombing campaign against North Vietnam and the first American combat troops entered the country, with Marines landing on beaches in South Vietnam.

Before Ousley served in a steaming hot engine room aboard the USS Princeton, he said, he wasn't doing very well in high school.

"School didn't seem to be the right place for me at that time," he said. He added he wasn't in trouble or anything, but just wasn't making good grades. "I thought I was wasting my time and the teachers' time. I just wasn't that good a student."

Ousley had family who had served in the Navy, but he said the main reason he chose that branch was because his parents had signed off on his entrance into the service as a 17-year-old on the condition that he not be in a branch where he could be on the ground in Vietnam.

He agreed, entered the Navy on a delayed entry in November 1965, and trained at Naval Station Great Lakes near Chicago in the dead of a Lake Michigan winter between December 1965 and March 1966. He turned 18 that January.

It took 10-12 days to sail across the Pacific Ocean from Long Beach, California, to what was then U.S. Naval Base Subic Bay, Philippines, then a tender would transport him to the USS Princeton off the coast to set sail for Vietnam.

It took all the way until January of this year though for Ousley to learn about the Missouri Veterans Commission and Missouri Department of Elementary and Secondary Education's Operation Recognition program - and only through what some would see as a chance encounter that he thinks of as more.

"I'm a religious person," born and raised Catholic, Ousley said, and he believes things happen that are "not just me being lucky" - situations such as a woman named Charm introducing herself to him and his wife as they waited in line for a movie in Henderson, Nevada.

Ousley said he and his wife, Gayleen, had gone to Las Vegas and just happened to be passing through Henderson as they drove around.

Ousley said he always wears a Vietnam veteran hat, and the woman in line asked him if he had graduated from high school. When he said no, the woman told him about a program Missouri participated in, through which he could get a diploma.

"We didn't put a lot of faith in it, but it turned out it's true," he said of the stranger's recommendation, after he asked Karen Enloe, the Jefferson City Public Schools Foundation's executive director, to verify it. That's when they all found out about Operation Recognition.

Ousley knows Enloe because he and Gayleen established Santa Day at Southwest Early Childhood Center. The Ousleys also gave Columbia College $100,000 to start the Ousley Family Veterans Service Center, which gives scholarships to veterans or their dependents who have exhausted their GI Bill benefits or are close to doing so.

Applications are sent from the Missouri Veterans Commission to the state's K-12 education department, and DESE prepares diplomas to be signed by the governor.

DESE shared more information last week on how many people have received diplomas through the program - including seven veterans who attended JCHS.

There have been 21 diplomas issued in Miller County, 16 issued in Boone County, 13 in Callaway County, seven each in Osage and Moniteau counties, and two in Morgan County.

Among other entrance requirements, the Army, Navy, Air Force, Marines and Coast Guard currently require enlistees to already have their high school diplomas; acceptance of a GED diploma or other high school equivalency varies depending on the service branch.

For Ousley, it "means everything" to him to get his high school diploma, and he said he'd wear his service uniform to JCHS's commencement ceremony this afternoon - if it still fits him.

"I'm honored that I got to serve my country. They needed people to serve," he said.

Though he's proud and humbled to receive his diploma on a public stage - especially when by comparison, his company commander told him upon his return from Vietnam to head to a bathroom right away and get out of his military clothes to not be recognized as in the service because of the public response he might get - it's important for him to let fellow veterans who may still not have their diplomas know about the chance.

He and Gayleen had two sons who served in the Navy. George - or Jay, as he was called by family and friends - died while serving at age 19.

Ousley said their other son, Gregory, will bring their two grandchildren to watch their grandfather get his diploma today.