Programs highlighted during Corrections day at the Capitol 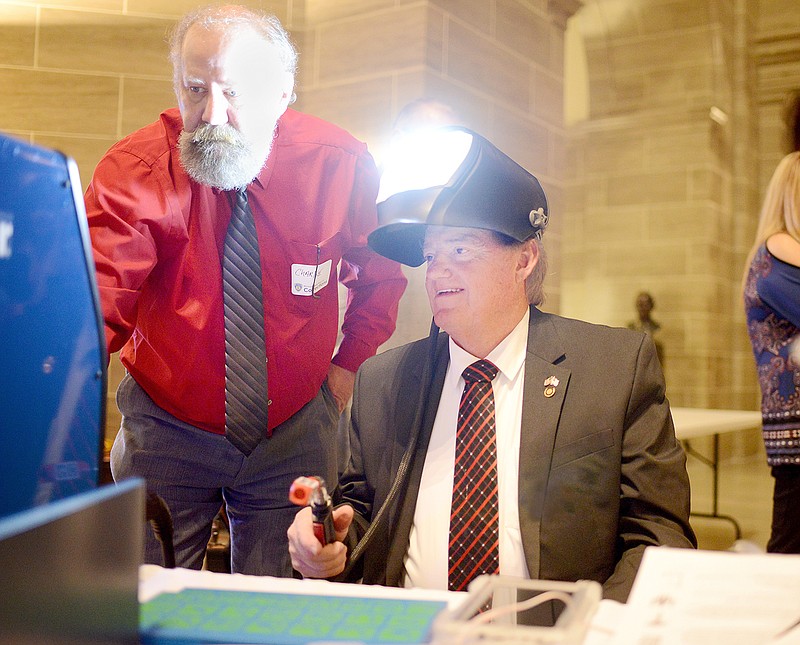 Welding instructor Charlie Grosvenor shows Rep. Tim Remole his percentage of accuracy Wednesday after Remole used a virtual welding machine to test his skills during Corrections Day at the Capitol. The program helps those who are incarcerated learn the basics while receiving curriculum for welding and safety that will help them become certified welders.

As of 2016, Missouri had the United States' eighth-highest prison population - when measured against the states' overall population.

The ratio at the time showed there were 730 offenders held in the state's prisons for every 100,000 of its residents.

However, programs aimed at reducing that population and the number of offenders returning to prison after release have begun to show effects, according to the Missouri Department of Corrections.

On Wednesday, the department held its annual Corrections Day at the Capitol to demonstrate to lawmakers it is using the state's money wisely and effectively - reducing the number of offenders in prisons and getting them ready to fill jobs for employers in need of good employees.

About 19,000 offenders earn their release from prisons every year, said Karen Pojmann, communications director for the department. A goal within the department is to make certain every one of them is prepared to re-integrate with society.

Wednesday's event in the third floor of the Capitol Rotunda also provided a chance for lawmakers to see what Corrections personnel are doing to help develop the state's workforce.

"A lot of the employers in Missouri are looking for workers," Pojmann said. "A lot of them have to turn down contracts because they don't have enough skilled workers to take on those contracts."

Corrections is striving to provide those skilled workers.

"The Department of Corrections is training people in various skills - construction, heavy equipment operation, truck driving, agriculture, culinary arts, welding - you name it, we have programs for it," Pojmann said. "So people can actually leave prison trained and certified with the skills that they need to get a job."

Some people have even been offered jobs before leaving prison. Additionally, the department offers employment readiness classes and teaches offenders how to put together a résume, conduct
themselves during job interviews or even answer questions about their felony convictions.

"Some of the programs will even provide clothes they can wear to conduct their interviews," Pojmann said. Through Corrections programs, employers can find the skilled labor they need to expand their businesses and strengthen the economy, she said. And offenders are earning steady incomes, which helps reduce recidivism.

"It's really beneficial for all aspects of the community," she said.

During Corrections Day, lawmakers were invited to try their hand at virtual welding or viewing how somebody with schizophrenia sees the world.

They were given glimpses into educational opportunities and vocational training programs offered to offenders across the state.

Much of the event focused on re-entry programs that connect former offenders with chances for employment. Shelle Jacobs, the Corrections re-entry coordinator, said she has been traveling all around the state inviting employers to give rehabilitated offenders chances to join their workforce.

"We've been bringing employers into the district parole and probation offices for interviews," Jacobs said. "We have several employers who have been offering positions (to offenders) on the spot.

"We've got a lot of really talented people coming out of prisons - they just need a second chance. With the low unemployment rate, people are really considering our parolees."

Richard Anderson, of Columbia, who was recently paroled, stood with Corrections personnel. Anderson said he found a job and a home after he got out of prison, but fell back into his heroin addiction.

And, through a failure of his required urine tests, the fall came to the attention of his probation and parole officer, Johna Elgin.

Elgin saw an opportunity to get Anderson the help he needed - through the Justice Reinvestment Initiative Treatment program. The pilot program, which is limited to Boone, Buchanan and Butler counties, is intended to provide intensive substance use disorder treatment services and to address barriers to treatment retention for offenders at the highest risk of recidivism, according to the Corrections website.

It uses the Ohio Risk Assessment System to determine which interventions are best suited for specific offenders. The system helps Corrections personnel distinguish at what risk level each offender may be.

The pilot program set Anderson up with a treatment team and plan.

"When you're using heroin, you really don't want to think about anything else, but doing it," Anderson said. "They helped me get back on my feet."

Even though he's only been in the program since December, Elgin said she sees a real change in Anderson. He works for a fast-food restaurant, but is thinking about making a change, possibly going into some part of the health care industry, because he gets a feeling of gratification out of helping other people, Anderson said.

"I've seen a huge difference in him. He's not the same guy I started supervising," Elgin said.

Shannon Kimsey, district administrator at the Fulton Community Supervision Center, said the center, which is the first facility of its kind in the state that is restricted to all female offenders, received its first group of residents Feb. 4.

The center operates somewhat like a transition center. Offenders begin with cognitive training - intended to improve their mental skills.

Community partners come into the facility and teach the women's classes concerning such topics as substance abuse or trauma. The University of Missouri also provides a cooking class done at Central Christian Church.

The women in the program love that class, Kimsey said.

"Women's pathway to prison often has to do with trauma," she said. "Through a partnership with Saint Louis University, we have a trauma-informed yoga class coming in April."

View the video accompanying this story on the News Tribune YouTube channel.