Report: Missouri to be among top 10 tech states within 5 years 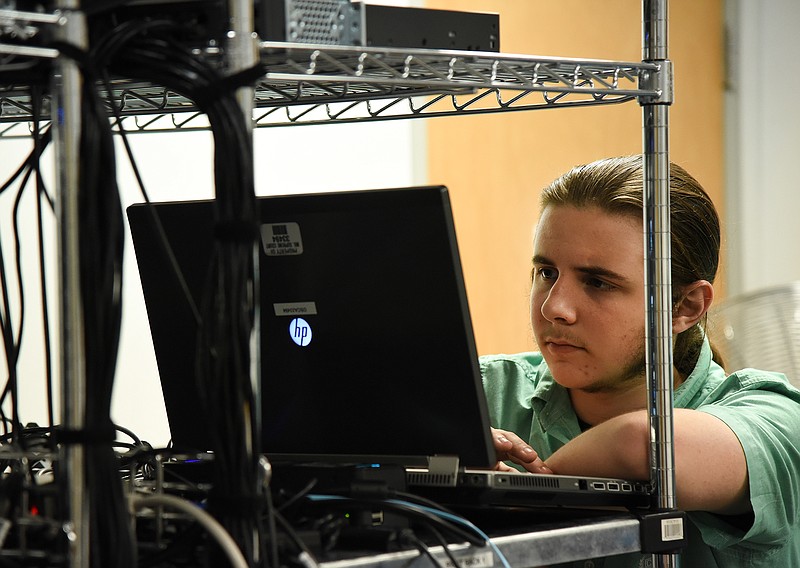 Thomas Beckwith configuring laptop to get it ready for a switch at the Office of the State Courts Administrator on Friday, June 22, 2018.

Over the next five years, Missouri will be among the nation's top 10 states for technology industry growth, according to a new report released Wednesday by the Missouri Chamber Foundation.

The 56-page report says Missouri is in a good position to benefit as the technology industry spreads from its bases on the nation's East and West coasts.

"In the 2018 Scoring Tech Talent Report, a 500-employee tech firm in St. Louis and Kansas City cost an estimated $39.6 million and $38.0 million, respectively, in annual operations. The same size tech company would require a total of $59.1 million in annual costs located in the San Francisco Bay Area."

The report was prepared for the Chamber Foundation by Ted Abernathy and Sara Casey of Economic Leadership, a Raleigh, North Carolina-based company that helps businesses, and places, increase their competitiveness.

It said Missouri is "well-poised to take advantage" of those national technology expansion trends.

"Kansas City and St. Louis have earned national reputations as outstanding locations for tech businesses," the report notes. "All the while, pockets of inspiring innovation are happening in Missouri's mid-size cities and small communities across the state."

"Tech giants have chosen the state as their pilot sites for new technology, including Google Fiber and Hyperloop One," the report adds. "Venture capital investment in Missouri tech companies has risen steadily in recent years (and) Missouri has quietly become a top growth tech state."

The report includes "a deeper analysis" of economic performance in several specific areas.

"IT makes up the largest share of jobs, accounting for 56 percent of jobs for a total of 81,000 employees," the Chamber Foundation's report says. "It is also fast-growing, expanding at a rate of 16.8 percent over the last five years. Environmental tech is the smallest share, but is the fastest-growing, with nearly 20 percent growth."

The study divided Missouri's technology sector into two areas - manufacturing and services - but also notes technology jobs are part of nearly every industry.

The report's executive summary says: "Tech manufacturing in Missouri has grown by nearly 30 percent in the last five years, compared to a negative national growth rate of -0.7 percent. Driving growth in Missouri is the manufacturing of electronic components, automatic environmental controls, bio-pharmaceuticals, battery storage and pesticides."

Missouri's tech sector also impacts the overall economy, with a job multiplier of 2.84 - for every job created, nearly two additional jobs were added.

"The future looks even brighter," the report said. "The tech industry is expected to grow jobs by 2.9 percent, ahead of the U.S. estimated tech job growth of 2.1 percent.

However, all is not rosy in the state, the report says, noting: "Missouri also scored low in some factors, including broadband access, internet adoption and small-business funding."

The report was released during a two-day conference in St. Louis on the future of technology in the state, and a Missouri Chamber of Commerce and Industry news release says the report also found:

In the next year, Missouri is expected to outpace the United States, the Midwest and the South in tech sector growth.

Missouri now ranks sixth in the nation in the percentage of tech jobs held by women.

Missouri already is in the top 10 states for diversity in the tech industry.

Dan Mehan, the state chamber's president and CEO, said in the news release: "We've long said that technology is the future of our economy. The Technology 2030 report makes it clearer than ever that the future is now."

Mehan said the state "must make progress on several fronts" in order to take advantage of the current, "positive" trends.

"We need to improve our broadband and transportation infrastructure," Mehan explained. "We need to continue our focus on preparing our workforce for the jobs of today and tomorrow.

"We also need to be aggressive in our efforts to attract tech investment to our cities and to smaller communities across the state."

Print Headline: Report: Missouri to be among top 10 tech states within 5 years