Blasts in Kabul hit near ceremony attended by top officials 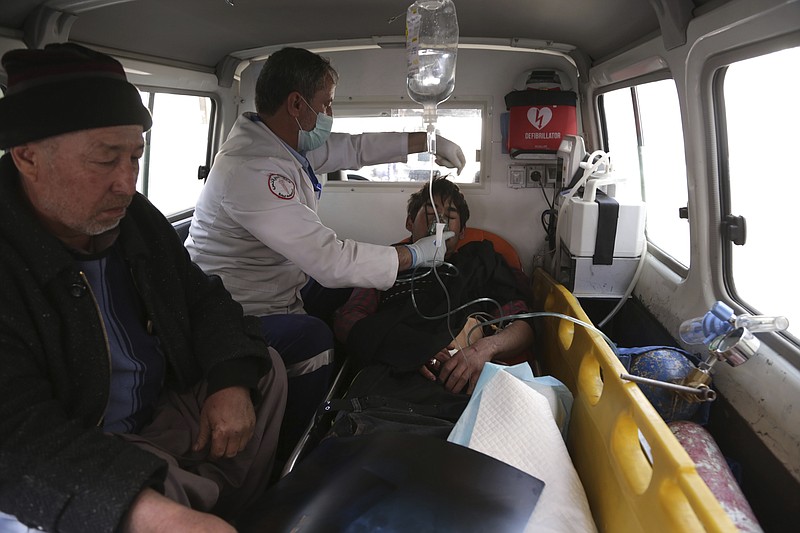 Afghans treat an injured man in an ambulance, in Kabul, Afghanistan, Thursday, March 7, 2019. Afghan officials say several explosions have struck outside a ceremony in Kabul attended by the country's chief executive and the former president, both of whom were unharmed. However, there was conflicting information as to the casualty figures in the immediate aftermath of the attack. (AP Photo/Rahmat Gul)

KABUL, Afghanistan (AP) — Mortar shells exploded Thursday outside a ceremony in the Afghan capital Kabul attended by the country’s chief executive and a former president. Both men were unharmed, but three others were killed, a government official said.

Nusrat Rahimi, deputy spokesman for the Interior Ministry, said 31 people were wounded in the attack launched from a house near the ceremony. Security forces battled for several hours with militants holed up in the house, Rahimi said, and two insurgents were eventually killed and one person arrested.

The ceremony was commemorating the 1995 death of prominent minority Hazara leader Abdul Ali Mazari, who was killed by the Taliban. Afghanistan’s Chief Executive Abdullah Abdullah and former President Hamid Karzai attended the gathering.

Presidential candidate and former Afghan National Security Adviser Hanif Atmar tweeted that eight of his personal guards were wounded and called the attack “horrid and unforgiveable.” Another presidential candidate, Latif Pedram, was injured. The extent of his injuries was not immediately known.

Hundreds of people attended the ceremony in a large hall on the western edge of Kabul in the Dasht-e-Barchi neighborhood, said Azizullah Amini, who attended the event.

Amini told the Associated Press he heard at least four explosions and the hall shook as if something was slamming into the ground outside the building. The ceremony quickly ended as people were rattled by the blasts.

IS claimed responsibility for the attack on an affiliated website, saying it targeted a “Shiite celebration attended by senior government officials.”

The IS affiliate has in the past targeted ethnic Hazaras, a mainly Shiite Muslim minority in Sunni majority Afghanistan. IS has declared war on Shiites, considering them heretics and attacking their mosques and educational institutions.

The militant group has often struck in the Dasht-e-Barchi neighborhood, where Hazaras dominate. The Taliban, by contrast have distanced themselves from attacks on Shiites in Afghanistan.

Meanwhile, IS claimed responsibility for an attack Wednesday on a construction company in eastern Nangarhar province that killed at least 17 people and triggered an hours-long gunbattle with Afghan forces, assisted by U.S. troops. The militant group on an affiliated website posted photographs of the two suicide bombers, both Afghan nationals.

Elsewhere in Afghanistan, the Taliban waged a blistering four-hour battle with security forces on Wednesday night in northern Kunduz province, in the Qalay Zul district, killing seven policemen, according to Mohammad Yosuf Ayubi, chairman of the provincial council. Ayubi said 90 percent of the district is now in Taliban hands.

And early on Thursday, the Taliban killed four Afghan border patrol officers in western Herat province, near the border with Iran, said Gelani Farhad, spokesman for the provincial governor.