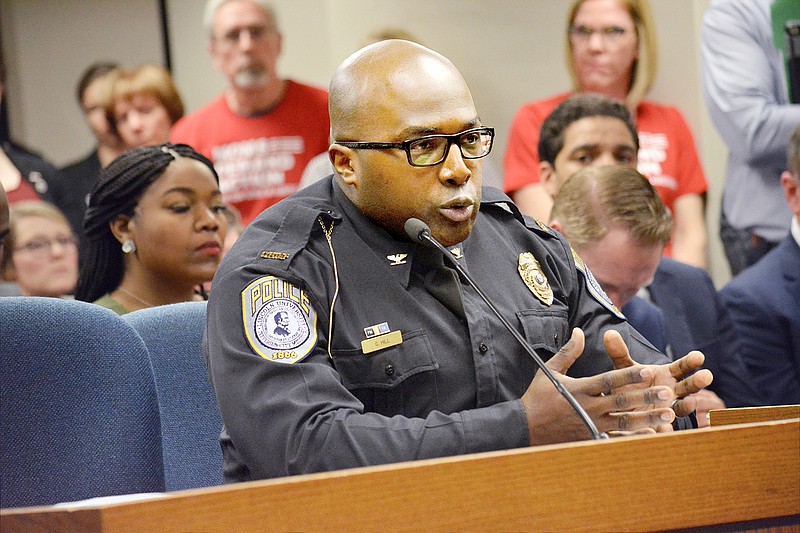 Lincoln University Police Chief Gary Hill testifies Wednesday in opposition of House bill 258 during a House General Laws Committee hearing at the Capitol. The bill would modify provisions relating to concealed carrying of firearms which would permit gun owners to take firearms onto college campuses and other public and private properties.

Local law enforcement leaders - such as Lincoln University Police Chief Gary Hill - testified in a hearing Wednesday in opposition to a bill that would make it legal for people in Missouri with concealed weapons permits to take firearms onto college campuses and other public and private properties.

Hill said he's not naive enough to think there aren't any people on his campus - which is an "open admissions" university, meaning a person need only have the equivalent of a high school diploma to be admitted - who are carrying firearms.

"We know that because we have found guns on the backs of toilet stools or that have fallen out of cars," he said. "We even had an individual shoot himself in the leg inside our dormitories."

The concrete dormitory floor could have kept other people from being injured, he added. And, Hill said, he's all for allowing people to defend themselves.

He admitted there have been some sexual assaults on LU's Jefferson City campus. They typically resulted from situations that were at first consensual but escalated - a person has the right to withdraw their consent, and the consent was not respected, he said.

In 2016, a U.S. Bureau of Justice Statistics survey found one in four women on college campuses were victims of sexual assaults. Those assaults included a broad range of forced or unwanted sexual activity, from unwanted touching to rape.

Scores of people, led by members of Moms Demand Action For Gun Sense in America, crowded into the hearing room to tell lawmakers they oppose the legislation.

Susan Randolph, the Jefferson City Moms Demand Action co-leader, said there's been an increase in the number of firearm-involved incidents in the city.

The group is concerned about gun violence, Randolph said.

"When they moved to permitless carry in 2016, that took away a sort of 'speed bump' - the requirement of background checks," Randolph said. "Now you have a situation where anyone can get their hands on a gun."

"In the first six months, they have seen a decrease in their violent assaults on campus," Taylor said.

Since he's been on the job and implemented programs and training, crime has gone down on the Lincoln University campus, Hill said.

The university has 13 sworn officers who patrol 2 square miles.

In filing the bill for the third consecutive year, Taylor said if victims on campuses were armed with firearms, assaults wouldn't happen.

"I can't speak with great certainty that allowing people to come on campus and carry concealed (weapons) would necessarily drop our already-dropping crime rate," Hill said. "What I can say is that I worry about the safety of our students."

In an active shooter incident, if there are people trying to protect themselves with firearms, officers may not know they are defending themselves when they arrive on the scene.

"The last thing we would want to see on that is for us to kill someone on accident - someone who is trying to protect themselves," Hill said. "And we've seen that happen across the nation as well."

Not only would the legislation allow concealed weapons on college campuses, but it would allow them in most municipal, county and state buildings, as well as bars, child care facilities, casinos, health care facilities, amusement parks and churches, Taylor said.

Meredith asked Taylor if organized law enforcement had come out in support of the bill.

"Some have. Some haven't," Taylor replied.

Matthew Brooks, a primary care physician with Jefferson City Medical Group, testified gun violence in Missouri increased after the 2007 repeal of the law requiring a permit to purchase a firearm. Following the hearing, he said from 2007-10, the homicide by firearms rate increased by 25 percent. Homicides by other means did not increase during the period.

"Homicides by firearms in surrounding states did not change during that period," he said. "So it was specific to Missouri after that law was repealed."

During the hearing, Taylor argued allowing people to carry concealed firearms in more locations would prevent violence. He said, on average, it can take more than 10 minutes for police to respond to calls for service.

Outside the hearing room, Hill said the response time may be 10 minutes or more for an area experiencing heavy traffic or for larger rural area. For example, he said, when he was a commander with the Cole County Sheriff's Office, it was not unusual for a deputy to take 17 minutes to reach Eugene, but that was more than 20 miles away from the office.

"As far as Lincoln University, we're looking at less than a minute reaction time," Hill said.

It can be up to three minutes at times, he said, because officers have to get out of a car and run upstairs on a college campus.