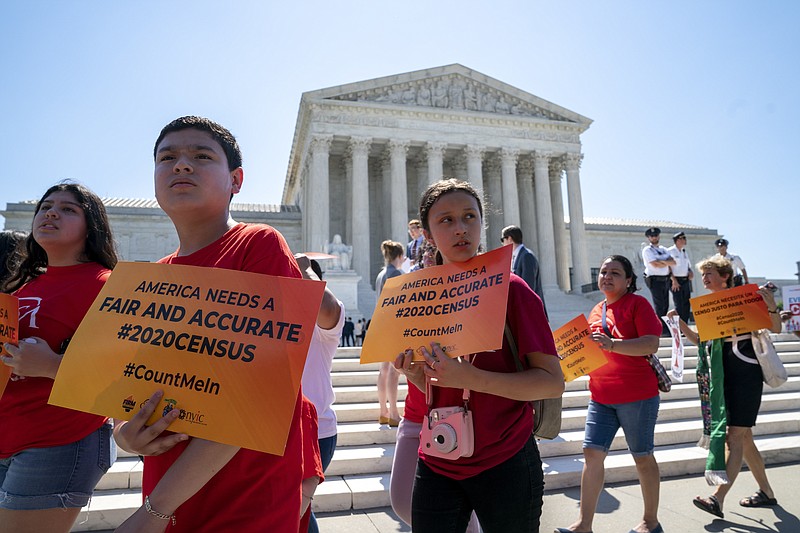 Young demonstrators gather at the Supreme Court as the justices finish the term with key decisions on gerrymandering and a census case involving an attempt by the Trump administration to ask everyone about their citizenship status in the 2020 census, on Capitol Hill in Washington, Thursday, June 27, 2019. (AP Photo/J. Scott Applewhite)

WASHINGTON (AP) - In a surprising move, the Supreme Court on Thursday kept the Trump administration from adding a citizenship question to the 2020 census for now, and the question's opponents said there's no time to revisit the issue before next week's scheduled start to the printing of census forms.

But President Donald Trump said on Twitter after the decision he's asked lawyers if they can "delay the Census, no matter how long" until the "United States Supreme Court is given additional information from which it can make a final and decisive decision" on the issue. Under federal law, the census must begin on April 1, 2020. A former director of the Census Bureau said he believed Congress would have to change the law for the count to be delayed.

The issue of whether to add the citizenship question to the census is a politically charged one. Democratic cities and states who oppose adding it argue they'd get less federal money and fewer representatives in Congress if the question is asked because it would discourage the participation of minorities, primarily Hispanics, who tend to support Democrats.

During arguments in the case at the Supreme Court in April it seemed as though the Trump administration would win because Chief Justice John Roberts and other conservatives appointed by Republican presidents did not appear to see anything wrong with Commerce Secretary Wilbur Ross' decision to add the question. Ultimately, however, Roberts joined the court's four more liberal members in saying the administration's current justification for the question "seems to have been contrived."

The Trump administration had said the question was being added to aid in enforcement of the Voting Rights Act, which protects minority voters' access to the ballot box. But the Justice Department had never previously sought a citizenship question in the 54-year history of the landmark voting rights law.

"Altogether, the evidence tells a story that does not match the explanation the secretary gave for his decision," Roberts wrote.

What will happen next is unclear. The Census Bureau said in a brief statement only the decision is "currently being reviewed." But The American Civil Liberties Union's Dale Ho, who argued against the citizenship question's addition at the Supreme Court said "there really, really is not time" for the administration to revisit adding the question.

The decision came on the last day the court was issuing opinions before a summer break. Also on Thursday the court issued a decision in a second politically charged case, dealing a huge blow to efforts to combat the drawing of electoral districts for partisan gain.

The Census Bureau's own experts predict millions of Hispanics and immigrants would go uncounted if the census asked everyone if he or she is an American citizen. And immigrant advocacy organizations and Democratic-led states, cities and counties that challenged the question's addition argue the question would make people with noncitizens in their households less likely to fill out their census forms.

In his opinion, Roberts wrote that evidence showed Ross "was determined to reinstate a citizenship question from the time he entered office." The Commerce Department oversees the Census Bureau.

Roberts added there is "a significant mismatch between the decision the secretary made and the rationale he provided." The court sent the issue of adding the citizenship question back to administration officials.