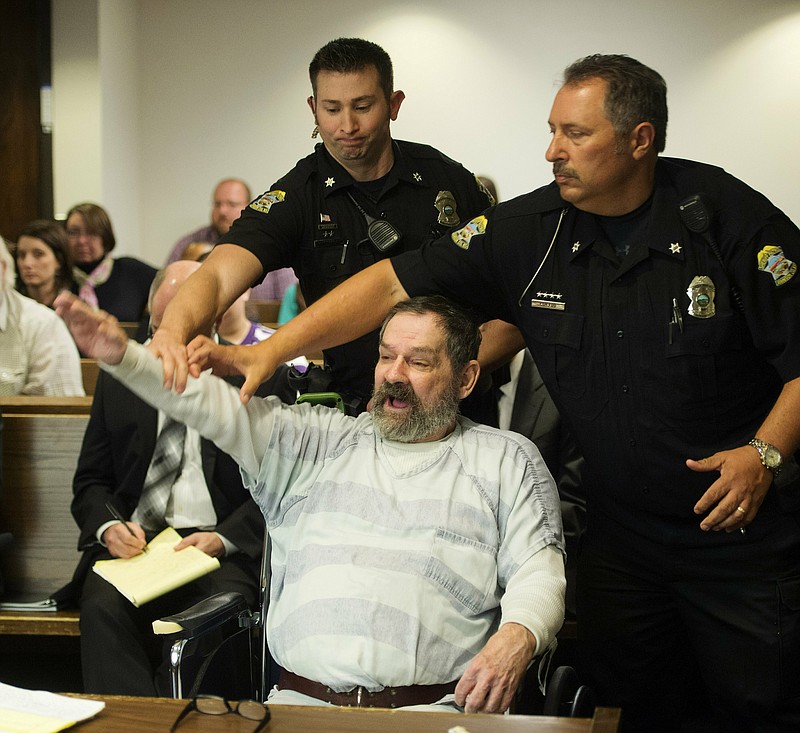 FILE - In this Nov. 10, 2015, file photo, Frazier Glenn Miller Jr., convicted of capital murder, attempted murder and other charges, gestures as Johnson County deputies remove Miller from the courtroom during the sentencing phase of his trial at the Johnson County District Court in Olathe, Kan. A recent Kansas Supreme Court ruling declaring that the state constitution protects access to abortion has opened the door to a new legal attack on the death penalty. Attorneys for five of the 10 men on death row in Kansas, including Miller Jr., argue that the abortion decision means the state's courts can enforce the broad guarantees of "life, liberty and the pursuit of happiness" in the Bill of Rights in the Kansas Constitution. (Joe Ledford/The Kansas City Star via AP, Pool, File)

Attorneys for five of the 10 men on death row in Kansas argue the abortion decision means the state’s courts can enforce the broad guarantees of “life, liberty and the pursuit of happiness” in the Bill of Rights in the Kansas Constitution. The lawyers contend the convicted killers cannot be executed because capital punishment violates their “inalienable” right to life.

They include Frazier Glenn Miller Jr., a white supremacist convicted of killing three people at two Jewish sites in the Kansas City area in 2014, and Jonathan and Reginald Carr, two brothers who, authorities said, forced five people to remove money from ATMs and have sex with one another before killing four of them in Wichita in 2000.

Defense attorneys launched the new legal attack on capital punishment in filings with the state Supreme Court in May, less than two weeks after the abortion decision. The justices took the claims seriously enough to order defense attorneys and prosecutors to file additional written arguments, with the last ones due in mid-November.

“It hasn’t been argued under the Kansas Constitution, at least, not in the way we are presenting it in these cases,” said Meryl Carver-Allmond, an attorney for two of the men. “This is a new argument.”

The Kansas Supreme Court’s abortion ruling in April was the latest in a long list of decisions that have angered conservative Republicans in the GOP-controlled Legislature. It said the state’s Bill of Rights grants a right to “personal autonomy” that includes access to abortion.

Four of the seven justices were appointed by Democratic Gov. Kathleen Sebelius and two by moderate Republican Gov. Bill Graves. The seventh, the only dissenter in the abortion case, was appointed by conservative GOP Gov. Sam Brownback.

Past decisions in capital murder cases also have sparked anger. Kansas’ last legal executions were in 1965, by hanging, and the state enacted its current death penalty law in 1994.

The court has yet to rule in Miller’s case. In 2014, the court overturned death sentences for the Carr brothers in two separate rulings. Those decisions helped fuel unsuccessful election campaigns in 2014 and 2016 to oust all but Brownback’s appointee. The U.S. Supreme Court overturned the rulings, sending the Carrs’ cases back to the Kansas Supreme Court. The cases are pending.

Republican Kansas Attorney General Derek Schmidt told the Associated Press this week the abortion decision has “opened the door for a wide range of new litigation.”

“There is a certain irony that a case regarding abortion is now being urged by some as a reason to upend the death penalty in Kansas,” Schmidt said. “I think that’s just the start, because this holding was so sweeping. I think it’s not just going to be abortion.”

In 2001, in its first ruling under the state’s current death penalty law, the Kansas Supreme Court rejected an argument the state constitution grants a right to life barring executions for crimes. Defense attorneys now argue the abortion decision provides grounds for reconsidering that conclusion.

David Lowden, an assistant district attorney in Sedgwick County, where the Carrs were convicted, argued in filings this month that it remains a “vast legal reach” to argue that capital punishment violates the state constitution.

“I’d rather air it out now, while it’s fresh, rather than find out 10 years from now somebody wants to try to do this,” Sedgwick County District Attorney Marc Bennett said in an interview.

Jeffrey Jackson, a Washburn University of Topeka law professor, said the right to life has never been interpreted to include freedom from being executed for a capital crime.

“When you’re trying your client from being executed, you find all the stuff. Your requirement is that you make all the arguments that you can credibly make,” Jackson said. “I just think that this one’s — it would not withstand scrutiny.”

Richard Levy, a University of Kansas law professor, said the abortion ruling suggests the Kansas court might recognize rights for the state’s residents that aren’t recognized nationally. Levy said he has doubts that the Kansas Supreme Court would declare capital punishment violates the state constitution but added, “I don’t think the argument is frivolous.”

“I think it’s more likely that the end result would be the death penalty is still constitutional but more safeguards have to be applied in Kansas than at the national level,” Levy said.