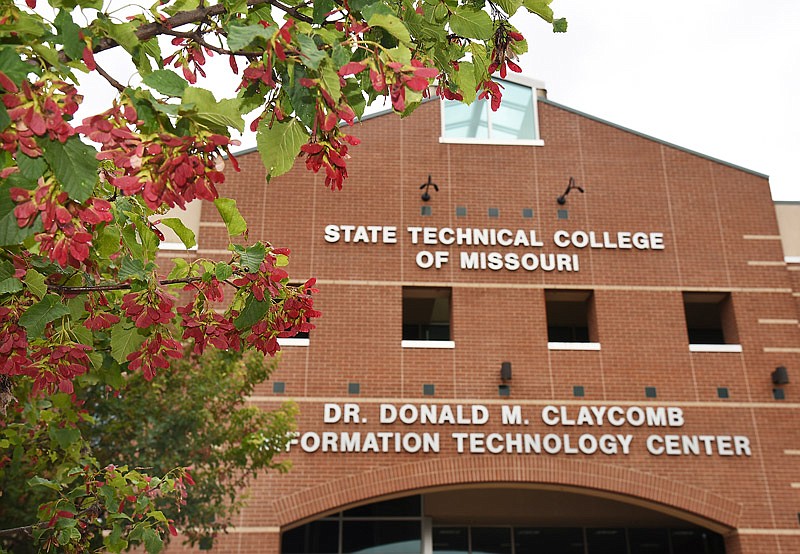 The Claycomb Technology Center on the campus of State Technical College of Missouri in Linn is depicted in this June 30, 2017 photo.

State Technical College will be receiving $1,232,823 from the Missouri Community Colleges Association, over the next four years.

Nancy Wiley, State Tech's grants manager, told the News Tribune on Tuesday that the Linn-based school plans to use the money for continuing the training in industrial electricity the school started a couple years ago with a $2.7653 million MoStart grant that "has worked," Wiley said.

That grant included training for inmates - especially at Chillicothe and Algoa - and, Wiley said, the target population for the new grant is the same kind of people.

"And, then, I'm working hard to drill deep into these drug courts and some different places that contain that target population," Wiley added, "to decide who is the right fit for this program and who really wants to better themselves (and) be set up for success."

State Tech is one of nine Missouri two-year schools sharing in a federal grant through the Missouri Community Colleges Association for the Missouri Apprenticeships in Manufacturing Program.

That's a statewide initiative to improve the ability to deliver innovative pre-apprenticeship and apprenticeship training programs.

An MCCA news release said participants will learn skills and earn credentials, or degrees, that will lead to high-demand entry and middle skills occupations in the advanced manufacturing industry.

The MCCA news release said the nine-member consortium that includes State Tech, along with the National Institute for Metalworking Skills (NIMS), a private-sector partner, "will target three career pathways of occupations within advanced manufacturing: automation and systems, logistics, and production and maintenance."

The release reported advanced manufacturing in Missouri represents 8.6 percent of total private sector employment, with 202,419 workers across 9,727 establishments in 29 industries.

Missouri is one of 18 states sharing in a total of 23 U.S. Department of Labor grants intended to continue expanding apprenticeships in the United States.

The federal Labor Department said, in a separate news release, that it's awarding $183.8 million to support the development and expansion of apprenticeships, for educational institutions that partner with companies that provide a funding match component.

The department said it also will make available an additional $100 million for efforts to expand apprenticeships and close the skills gap.

"The apprenticeship model of earning while learning has worked well in many American industries, and today, we open opportunities for apprenticeships to flourish in new sectors of our economy," U.S. Labor Secretary Alexander Acosta said, in the news release. "With 7.4 million open jobs - and job creators searching for skilled job seekers - apprenticeship expansion will continue to close the skills gap and strengthen the greatest workforce in the world, the American workforce."

Wiley said, in addition to the new federal grant through the MCCA, State Tech is looking for other grant opportunities that can help it provide training to the "unemployed, underemployed, low-skilled individuals (who want) to find meaningful employment."

She added: "State Tech has supported innovative, flexible training in a variety of facilities (and schedules).

"We are (even) able to take the training inside a Corrections Center and - while you're still incarcerated - you can be trained to where the day you get out of prison (is a day that) you are ready to go to find meaningful employment."