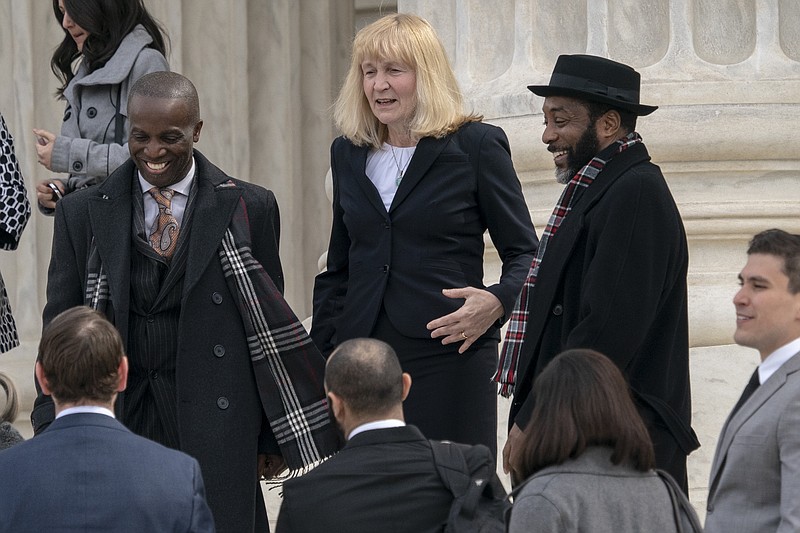 FILE - In this March 20, 2019 file photo, Attorney Sheri Johnson leaves the Supreme Court after challenging a Mississippi prosecutor's decision to keep African-Americans off the jury in the trial of Curtis Flowers, in Washington. The Supreme Court is throwing out the murder conviction and death sentence for Flowers because of a prosecutor's efforts to keep African Americans off the jury. The defendant already has been tried six times and now could face a seventh trial. The court's 7-2 decision Friday says the removal of black prospective jurors violated the rights of inmate Curtis Flowers. (AP Photo/J. Scott Applewhite)

WASHINGTON (AP) — The Supreme Court on Friday threw out the murder conviction and death sentence for a black man in Mississippi because of a prosecutor’s efforts to keep African Americans off the jury. The defendant already has been tried six times and now could face a seventh trial.

The removal of black prospective jurors deprived inmate Curtis Flowers of a fair trial, the court said in a 7-2 decision written by Justice Brett Kavanaugh.

The long record of Flowers’ trials stretching back more than 20 years shows District Attorney Doug Evans’ “relentless, determined effort to rid the jury of black individuals,” with the goal of an all-white jury, Kavanaugh wrote.

In Flowers’ sixth trial, the jury was made up of 11 white individuals and one African American. Prosecutor Evans struck five black prospective jurors.

In the earlier trials, three convictions were tossed out, including one when the prosecutor improperly excluded African Americans from the jury. In the second trial, the judge chided Evans for striking a juror based on race. Two other trials ended when jurors couldn’t reach unanimous verdicts.

“The numbers speak loudly,” Kavanaugh said in a summary of his opinion that he read in the courtroom, noting Evans had removed 41 of the 42 prospective black jurors over the six trials. “We cannot ignore that history.”

Thomas, the only African American on the court, said the decision may have one redeeming quality: “The state is perfectly free to convict Curtis Flowers again.”

Flowers has been in jail more than 22 years, since his arrest after four people were found shot to death in a furniture store in Winona, Mississippi, in July 1996.

Flowers was arrested several months later, described by prosecutors as a disgruntled former employee who sought revenge against the store’s owner because she fired him and withheld most of his pay to cover the cost of merchandise he damaged. Nearly $300 was found missing after the killings.

Defense lawyers have argued witness statements and physical evidence against Flowers are too weak to convict him. A jailhouse informant who claimed Flowers had confessed to him recanted in recorded telephone conversations with American Public Media’s “In the Dark” podcast. A separate appeal is pending in state court questioning Flowers’ actual guilt, citing in part evidence that reporters for “In the Dark” detailed.

“A seventh trial would be unprecedented and completely unwarranted given both the flimsiness of the evidence against him and the long trail of misconduct that has kept him wrongfully incarcerated all these years. We hope that the state of Mississippi will finally disavow Doug Evans’ misconduct, decline to pursue yet another trial and set Mr. Flowers free,” Sheri Lynn Johnson, who represented Flowers at the Supreme Court, said in an emailed statement.

Evans said he remained confident of Flowers’ guilt but hadn’t decided on retrial, according to American Public Media. However, he denied trying to exclude African Americans from the jury.

In the course of selecting a jury, lawyers can excuse a juror merely because of a suspicion that a particular person would vote against their client. Those are called peremptory strikes, and they have been the focus of the complaints about discrimination.