Report: Health care is where careers can be found 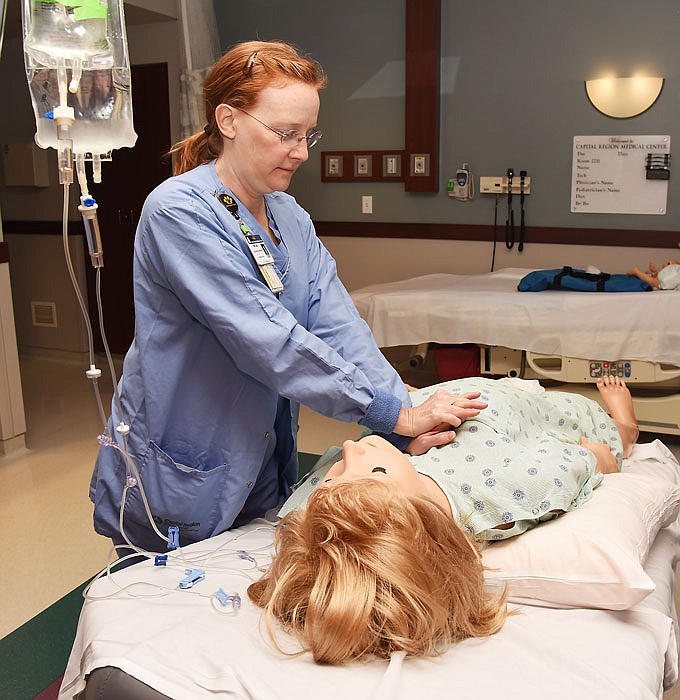 Health care continues to be the fastest-growing industry in Missouri, and it is expected to lead the state in growth for the next decade.

And as the health care industry competes with other industries for the best workers in the state, hospitals will have to be creative to fill positions, according to David Mitchell, a professor of economics at Missouri State University.

Since 2000, employment in health care is up 52 percent. And, it is expected to have grown 83 percent above 2000 rates by 2030, according to the "Missouri's Hospital Workforce 2019" report authored by Mitchell and produced by the Missouri Hospital Association.

"What is the current state of the workforce and what will it be like in the future?" Mitchell asked. "There will be shortages of health care workers. One of the things that people need to think about is 'How is Missouri going to be able to meet its health care needs?'"

There will be shortages of doctors and nurses in several areas.

Projections within the report, Mitchell said, are intended to get local leaders, colleges, universities and lawmakers to begin thinking about preparing the health care system.

When the public thinks about workforce development, it oftentimes focuses on manufacturing or agricultural industries.

Yet, several of the state's other industries have struggled simply to regain the level of workforce they enjoyed at the turn of the century.

The annual report, released earlier this month, shows that overall, Missouri employment is up only 7 percent over 2000. After several years of decline, construction and transportation industries have recovered to almost the numbers they enjoyed that year. However, manufacturing remains about 25 percent below its 2000 rate.

The MHA creates the document each year to give a snapshot of what health care looks like in the state, according to Jill Williams, MHA vice president of workforce initiatives. It has the added benefit of projections this year, she said.

"The 'why' is really just to help give our hospitals and human resources (personnel), and other stakeholders an outlook for health care," Williams said, "to meet the future health care needs of Missourians."

The report is intended to help educational facilities and state government gain an idea of where they may want to focus efforts.

"We wanted to see what types of investments might be necessary," said Dave Dillon, MHA vice president of public and media relations. "We wanted to look at the geographic standpoint. Nurses tend to live near their community they grew up in."

Although the nursing professional can be mobile, many nurses aren't, he added. A state may have a lot of nurses, but if they aren't in the correct places, the state may still have shortages.

There is a larger and larger percentage of the population getting older and older, Mitchell said. There is little doubt the health care industry is going to have to keep pace.

The report warns in some parts of Missouri - particularly the most rural areas - there will be shortages in not only nursing but a range of positions within the health care workforce over the next 10 years.

Hospitals struggle to recruit and retain highly trained positions and especially entry-level positions but also have to deal with high turnover rates, according to the report.

Health care is a stable, high-paying job, Mitchell said, that makes for the type of career that was once more attainable in manufacturing.

"(Health care) can make a difference in someone's life," he said. "If young people are looking to get job security, they are going to look at health care."

The MHA Central region includes 21 hospitals, 18 of which participated in the workforce survey from last year. The report is based on data provided by hospitals.

Hospitals reported they had a total of 3,471 registered nurse positions available in 2018. However, 350 (9.2 percent) remained open. That reflected a smaller percentage than openings the previous year. In 2017, hospitals had 2,986 RN positions available, with 383 (11.4 percent) open.

The higher number of available positions may help explain a rise in turnover rate. In 2017, 14 percent of the positions turned over, while in 2018, the rate increased to 16.2 percent.

"We do have to work extra hard to find good, quality individuals to join our teams," she said in an email to the News Tribune. "To do that, we must be creative and work very quickly."

The hospital has to "particularly work hard" to recruit RNs and licensed practical nurses, pharmacy personnel and people to work in respiratory therapy, Sweazea said.

"We also stay diligent to add members to our front-line teams in housekeeping and food service," Sweazea added.

The MHA report shows the turnover rate - the percentage of employees lost and replaced - among nurse assistants in the region rose from 24 percent in 2017 to 33 percent in 2018.

Hospitals offer a number of career paths that begin from entry-level positions, such as a nurse assistant, Williams said.

"In the '90s, manufacturing was the leading industry in communities. Now, a lot of times, hospitals are the biggest employers in a community," she said.

The MHA is trying to get the word out that people have opportunities to begin careers in hospitals that provide middle class incomes.

"The message I'm trying to get across is that many of our fastest-advancing roles require a two-year degree or less. Many require a lot less training than a nurse or physician," Williams said.

People may not only move up, but they may also move laterally within health care for new challenges, Williams said.

"It's not instinctual for people to think of (health care) as one of the sexy career areas to invest in," Dillon said. "But, if you look at the numbers, you see there are significant demands for these particular workers."

Someone on a possible career path may begin as a food service associate, making $21,000 annually, according to a chart using U.S. Bureau of Labor Statistics. They can quickly move up to nursing assistant, making an average of $27,000 annually, unit secretary, making $34,000 annually, registered nurse at $71,000 and nurse practitioner at $101,000.

As someone earns credentials, they become more valuable, not only to their employer, but to other potential employers, Dillon said.

"Even outside health care, we are competing for those credentialed individuals," Dillon said. That nurse may start out working for a hospital, but take that RN title and go to work for an insurance company or pharmaceutical company.

"The ability to move between a variety of fields is not necessarily great for hospitals, but it's great for workers."

Print Headline: Report: Health care is where careers can be found