Local film camp to teach students as they work to create shorts, a feature and documentary 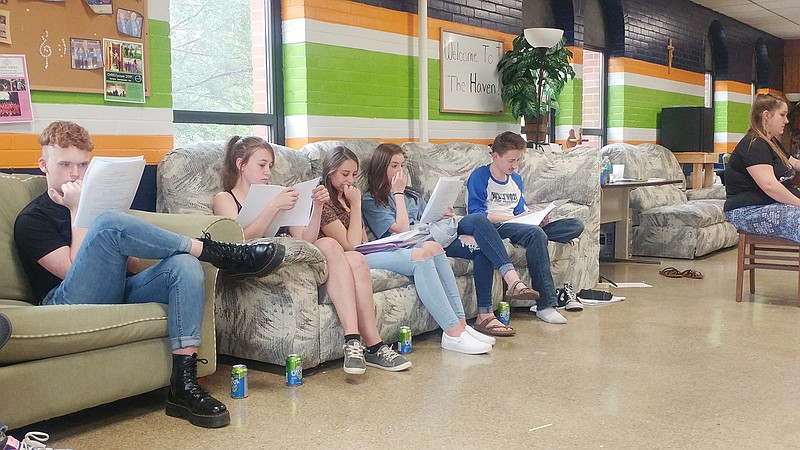 Students read the screenplay of "Gumshoe High," which will be filmed in this summer's Showdown Film Academy.

While summer blockbusters fill Mid-Missouri multiplexes, area youth will make their own films through the Showdown Film Academy and work with Hollywood professionals to learn the film-making craft.

The Jefferson City Parks, Recreation and Forestry Department partnered with the founders of California-based Showdown Stage Company to bring a new film camp to the Capital City this summer.

Showdown co-founder Cindy Marcus said the company has been operating a theater camp in Jefferson City for 13 years, but this will be the first time having a film camp.

"For the first time, industry professionals from Los Angeles are coming to Missouri's capital city to work with students to create a feature length film," according to a flyer from Showdown.

A former Showdown summer camp student, Josh Arnold, came up with the idea for the film camp.

Film Academy is a two-week camp that will provide hands-on experiences and a glimpse into the world of film production. The class will include working with industry pros in different film aspects like cinematography, music, writing and producing.

Marcus said Monday at the Selinger Center ahead of an advanced preview table-reading of a screenplay that students will be shooting this summer - "Gumshoe High" - that the camp is "not about making kids stars," but about making children stars in their own lives.

Co-founder Flip Kobler said while students will leave with a portfolio of work they can market to colleges, the tools learned will be applicable to careers outside the arts, too.

The camp was originally supposed to be at Avenue HQ on East Capitol Avenue, and shooting was supposed to happen inside the Missouri State Penitentiary, but May 22's tornado changed all that.

"The key is to be fluid," Kobler said of adapting.

At the end of the two-week film camp, students 13 years and older will leave with three- to five-minute short films they will have made, and the students will have also collaborated to create "Gumshoe High" and a behind-the-scenes documentary about the making of the film.

Kobler said "Gumshoe" will be an homage to hard-boiled noir films such as those of the Sam Spade character - played by Humphrey Bogart in 1941's "The Maltese Falcon."

The feature is planned to be about an hour long, and likewise with the behind-the-scenes documentary.

Kobler said it's planned that there will be a festival of students' short films after the camp.

He said "Gumshoe High" will require months of post-production work, so a screening of that would have to be further out, but he would love to come back and have a screening.

Other Showdown camps for younger children are already underway.

More information is available at www.jeffersoncitymo.gov/programs_and_activities/youth_day_camps/showdown_academy.php.