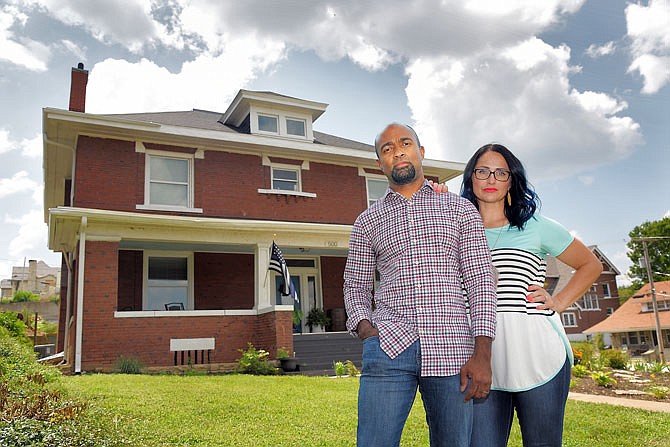 Aaron and Erin Clark pose outside of a home they own at 500 E. Miller St. The couple purchased the home in 2017 and now use it as a short-term rental unit known as the Hobo Hill House. The house and its spirits are the subject of an upcoming episode of "The Dead Files" that airs on the Travel Channel.

While living in one of Jefferson City's historic homes, a young couple and their two children experienced things people normally see in movies like "Paranormal Activity" and "The Amityville Horror."

Now, that home will be featured on a paranormal TV series next month.

Built in 1910, the 2-story American Foursquare residence nestled in the middle of the Hobo Hill Historic District looks like many of the grandiose historic homes in Jefferson City. But looks can be deceiving, something property owners Aaron and Erin Clark learned quickly.

The couple purchased the 5,000-square-foot home in August 2017 and renovated and restored it. The Clarks even received the Historic City of Jefferson's September 2018 Gold Hammer Award for their renovations.

However, there were some unexplained and creepy things happening in that house.

"We thought we were experiencing a lot of paranormal activity at the house, which, telling you, sounds silly," Aaron Clark said.

The kitchen sink, TV, lights and space heaters turning on by themselves was creepy, he said, but some of the most terrifying moments involved his 8-year-old daughter having night terrors and sleepwalking.

"It seemed as if she was possessed because she would be really wide-eyed and shaking," Aaron said.

The family's pitbull avoided certain places of the home, such as the stairs. There were also continuous noises throughout the house, from loud bumps and creaks to voices saying "hi" to the family as they entered the home.

"The craziest thing, besides my daughter, at least in my opinion, was both my wife and I, from the corner of our eyes, saw a tall man in a suit and top hat," Aaron said.

The family lived in the house for about seven months before they moved out, he said. The couple now runs a short-term rental business from the Hobo Hill House.

"We didn't think it would be right selling to another family knowing what we know," Aaron said. "We'll just turn lemons into lemonade, and since the prison is so close and people in Jeff are interested in that sort of thing, we'll just turn it into a short-term Airbnb and people can stay and have experiences."

Those interested can book a couple of nights in the home by visiting vrbo.com/1595711. Aaron warned that the first group that rented the home "couldn't stay the whole night."

While living in the home, the family emailed Steve DiSchiavi, a former New York Police Department homicide detective, and Amy Allan, a physical medium, from the show "The Dead Files." The duo contacted the family six months after they moved out and asked to investigate the home.

The TV stars experienced paranormal activity at the Hobo Hill House and will broadcast their experiences Aug. 1, Aaron said.

"Aside from it being on TV, I was happy to know we weren't crazy, that what we were feeling and experiencing was correct," he said.

Adolph and Beulah Brandenberger built the house at 500 E. Miller St. in 1910 and lived there until they sold it in 1922, according to a Sept. 16, 2018, News Tribune article. Since then, multiple Jefferson City residents have owned that home.

The Aug. 1 episode, "Not My Child," will also feature the Missouri State Penitentiary, said Brittney Mormann, communications and film manager with the Jefferson City Convention and Visitors Bureau.

The old prison has been the focus of several paranormal TV shows, including the Travel Channel's "Ghost Adventures."

Ward 5 Councilman Mark Schreiber, who was a deputy warden of operations at MSP, was interviewed earlier this year for the episode.

"My thinking is anytime we can do something to promote Jefferson City, as long as it's not in a negative light so to speak, I think that's a good thing," he told the News Tribune. "Certainly, we need to continue to promote the prison now that we're not certain when we can start the tours back up with all the damage done over there."

The CVB suspended its Missouri State Penitentiary tours following the May 22 tornado. The tours are canceled through Aug. 31.

The CVB is waiting for the Missouri Office of Administration's reports regarding the tornado damage, CVB Executive Director Diane Gillespie said earlier this week. From there, the state and CVB can formulate a plan.