Speaker's Hyperloop panel getting closer to a final report 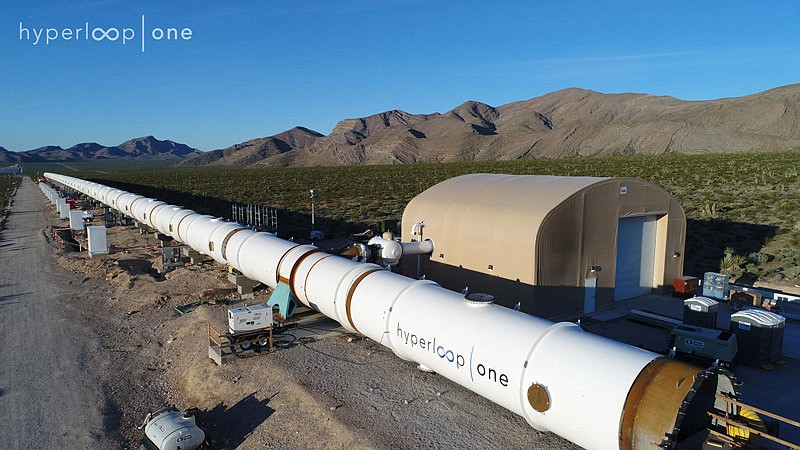 In this photo provided by Hyperloop One, the company's test track is seen in the Nevada desert.

After a nearly two-hour meeting at the University of Missouri's Laferre Engineering Hall, Andrew Smith, of St. Louis, told the News Tribune: "We've had much more in-depth conversations with federal regulators, with legislators in Washington and in the state of Missouri, (and) with technology companies that are going to commercialize this.

"And I think we also, as you heard today, have made a lot of progress in our thinking around how do you build a national center of excellence, leveraging the state's higher education assets and partnering with other state universities in our region."

Haahr, R-Springfield, announced the creation of the special committee on March 12, telling reporters at the time: "This is something I've been very excited about for a period of time.

"Rep. (Travis) Fitzwater - who (is) on the panel - and I went to Nevada last year to look at the initial test track that Virgin One has in the Mojave Desert. (I was) very impressed with the technology."

The concept would allow high-speed - around 500 mph - travel through vacuum-type tubes, with an estimated construction cost of $7 billion-$10 billion for a proposed system connecting Kansas City, Columbia and St. Louis.

It's estimated there would be 30- to 40-minute travel time between the state's two big cities.

Missouri is ahead of other states also looking at the idea, the panel was reminded, because Kansas City's Black and Veatch engineering firm has already done a feasibility study for the project, while other states have not.

However, Smith said Tuesday, there's no guarantee the "idea" can become a feasible "reality."

"The reality is, computer models and prototypes can only take you so far," he said. "At the end of the day, this is a real-world, physical transportation system that has to be built.

"And Missouri is the Show-Me State, right? Seeing is believing.

"I think that's one of the reasons they're so keen on doing it here - because if you can do it in a place like Missouri, you can do it anywhere."

Fitzwater told the News Tribune: "I think this is a group of people who want to find solutions for 'How do we invest in a future technology like this, without breaking the bank?'"

Several people said during Tuesday's meeting that the Hyperloop discussion could be compared to America's space flight efforts in the 1960s, which culminated in the Apollo 11 moon landing on July 20, 1969.

Fitzwater said: "I think our country's been full of dreamers for generations. And I think this is another dream that I think has a real chance to become reality.

"As soon as we stop dreaming and we stagnate, I think it's a real problem for our country."

He noted no final decisions have been made, and committee members still are discussing if the dream is ultimately a good idea.

Missouri and others have been working with the Los Angeles-based "Virgin Hyperloop One" - the company Haahr noted in March already has a test track in Nevada.

One of the committee's meetings this spring involved visiting that track.

However, Smith said, "We have to find a way to build a certification track that meets the company's specifications and satisfies the federal Department of Transportation that this is safe for humans to use."

Smith noted the Hyperloop concept is different from the high-speed, passenger trains that operate in Europe and Japan.

"One is that this is about three times faster - that's a meaningful difference," he explained. "The reality is, this (also) is about 40 percent less expensive to build" than those high-speed rail operations, partly because the environmental impact and land use requirements are greater.

One comment during Tuesday's meeting was the general public isn't following the committee's work and may not want to support it.

However, Missouri Transportation Director Patrick McKenna, a committee member, noted freight shippers are the audience whose support is needed the most.

"The margins in freight are 40 percent, (while) they lose money in moving people," he said.

And even with a working Hyperloop system, McKenna added later in the meeting, shippers still will have to deal with the "last mile served" - that is, getting a product from a Hyperloop stop to the customer wanting that product to be delivered.

"If there is an area of competition, it probably would be short-range air," he said. "And I think the air industry would not necessarily fight that - because that's a low-margin business for them.

"They make their money on long-distance flights."

McKenna also noted the Federal Highway Administration is predicting freight traffic will increase by 40-50 percent over the next few decades, and Missouri's and other states' transportation systems aren't likely to be able to handle the increase.

A Hyperloop system might be able to help handle that increase, he said.

And, one committee member noted, if it's determined building a Hyperloop system between St. Louis, Columbia and Kansas City is feasible, that will only be the beginning because others will want to add on to the Missouri system.

The committee is scheduled to deliver their report to Haahr in September.