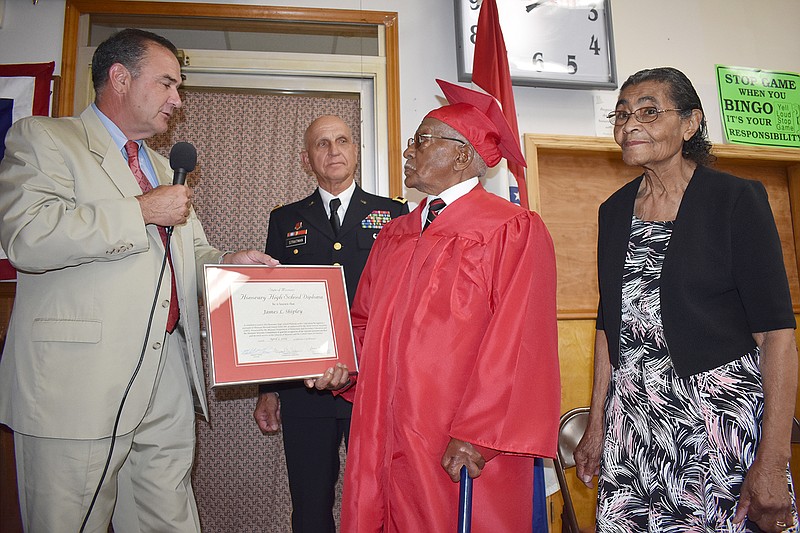 Tipton native James Shipley was unable to finish high school, but went on to serve his country as a crew chief for the famed Tuskegee Airmen.

During a speech, Shipley acknowledged he wasn't a good student during high school, but he was happy to receive a diploma.

Shipley said discrimination was more prevalent when he was younger. "People are beginning to realize that color doesn't matter. It's what's in the heart," he said to applause.

Shipley didn't have a chance to earn his diploma the first time around. He attended an all-black high school that wasn't credentialed through 12th grade. He would have had to travel to Sedalia for his final year, and he didn't have the resources to do so, said Jeremy Amick, who coordinated the event.

Amick, a local author and military historian, wrote a newspaper story then book about Shipley titled "Together As One: Legacy of James Shipley, World War II Tuskegee Airman."

The Tuskegee Airmen were a group of African-American military pilots and support crew who made up the 332nd Fighter Group and the 477th Bombardment Group of the United States Army Air Forces.

Amick and Shipley became friends through the process of writing the book, and Amick arranged for Shipley to receive an honorary diploma through "Operation Recognition," a Missouri program.

Stratman credited Shipley and Tuskegee Airmen for laying the foundation for racial integration in the Armed Forces during World War II. He said Shipley used his mechanical expertise to ensure the safety of the pilots, and he rose to the rank of staff sergeant in three years.

"They proved they had the skills, courage and commitment to serve in the armed services," Stratman said.

Terry Robinson, superintendent of the Tipton R-6 School District, said Shipley, a humble man, answered the call to fight for our country in a time of worldwide crisis.

"He continued to learn, to serve our nation, even though our own school district at the time said he didn't graduate. That's wrong. And today some things are going to get set right," Robinson said.

Robinson invited Shipley to walk with the high school graduating class of 2020, and Shipley said he will do so, if he's able.

Debra Miles, one of the first in line to congratulate Shipley, said people sometimes take for granted the fact the military is integrated today.

A student of history, Miles read the book about Shipley and was eager to meet him. She said people don't realize countless, nameless individuals like Shipley and the Tuskegee Airmen paved the way for integration.