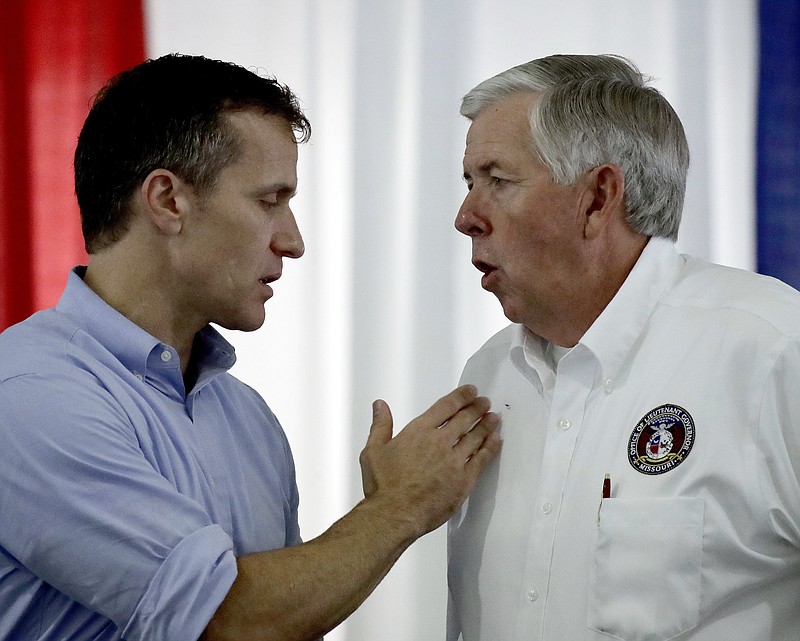 FILE - In this Aug. 17, 2017, file photo, Missouri Gov. Eric Greitens, left, talks to Lt. Gov. Mike Parson during the Governor's Ham Breakfast at the Missouri State Fair in Sedalia, Mo. Greitens announced his resignation Tuesday, May 29, 2018, after a scandal involving an affair with his former hairdresser led to a broader investigation by prosecutors and state legislators, thus elevating fellow Republican Parson to the governor's office. (AP Photo/Charlie Riedel, File)

A Greitens-era program is having some tangible results.

Two years ago - on his second day in office - then-Gov. Eric Greitens ordered all Missouri state agencies to review their administrative rules, with a goal of reducing Missouri's regulatory burden by 33 percent.

Greitens said then his executive order was an effort to remove "needless and burdensome regulations" - and it included a period of a little over a month where the agencies couldn't implement any new regulations.

The order also instructed the departments to solicit public comments to guide the review process.

The reviews originally were due at the end of May 2018, but - with Greitens' resignation last June 1 - Gov. Mike Parson extended the departments' deadline to the end of September.

The Greitens administration worked with a company called Argive to help with the rules review and the public comments about it.

In a report updated last month, the company said the departments had received 4,500 comments on various regulations and had identified 12,448 "regulatory restrictions" that could be eliminated from the Missouri Code of State Regulations (CSR) - a number that represented a "targeted reduction" of 11 percent from the 113,112 regulatory restrictions in the CSR when the review started two years ago.

Under the state's existing laws and regulations - even with Greitens' order for the statewide regulations review - a department can't decide on its own to eliminate a rule or regulation.

There's a process where the secretary of state's office must publish proposed rule changes, and there's a public comment period before the agency proposing the change can implement it.

The report explained the state departments and agencies used a specific computer model to search for "the number of binding constraints or 'restrictions' to better quantify the actual impact of regulations."

The report defined "restriction" as "a word that indicates an obligation to comply, such as 'shall,' 'must,' 'may not,' 'prohibited' and 'required.'"

Those were the "restrictions" Greitens' office wanted to cut by 33 percent across all the departments.

The governor's program was called "No MO Red Tape."

"To publicize these efforts and collect public feedback on regulations, Argive created a dedicated website for the Governor's office and collaborated with individual departments to assist their rule review processes."

That website was nomoredtape.com. It no longer is active.

The argive.com report (available online at argive.org/no-mo-red-tape) includes final reports issued by some - but not all - of the state government agencies.

Here's a sampling of some of the findings, from departments that filed their final reports with Argive.

The Department of Economic Development reported its "Business Use Incentives for Large-Scale Development program (known as BUILD) provides incentives for businesses adding jobs in Missouri that require significant capital investment," as long as they "look at other states before they can be eligible for the Missouri program. Removing this restriction would ensure that the state can help promising businesses create jobs in Missouri, without encouraging them to look elsewhere, potentially avoiding costly bidding wars with other states."

The Energy Loan Program that helps schools, hospitals and local governments pay for energy-saving investments - like high-efficiency heating and lighting - was to amend its language to make clear what role, if any, a professional engineer must play in order to be eligible for the program.

"Amending this language would resolve this uncertainty and make it easier for schools, hospitals and local government organizations to adopt energy efficiency measures that will enable them to save long-term resources and reallocate them to better serve Missourians," the department said.

Major changes also were being made to the department's Division of Workforce Development's regulations that "use confusing, outdated terminology regarding DWD and its various functions. Existing DWD regulations list many rules for outdated workforce training programs that haven't been in effect for years.

"Coupled with statutory amendments and past program rebranding efforts, it can be difficult to interpret which workforce training programs are in effect and which rules apply."

The Department of Mental Health reported cutting the SATOP (Substance Abuse Traffic Offender Program) regulations by almost 80 percent - from 192 to 39.

"The revisions will help to enhance the general public's understanding of SATOP and the requirements for individuals referred to the program as the result of an alcohol- or drug-impaired driving offense."

The department also reported cutting its licensure rules for day programs and community-based residential facilities by half - from 10 chapters to five - "by eliminating duplicative and unnecessary language and consolidating the regulations which will modernize the licensing process for staff and service providers."

With input from service providers and stakeholders, the Mental Health Department said its regulations for the separate divisions of Behavioral Health, and Developmental Disabilities, were updated to include "state-of-the-art behavioral health practices and principles," and to provide "priority access to services, utilization review, appeals and individual support plans."

"The Department of Natural Resources (DNR) was particularly successful in reducing red tape," the Argive report said. "After reviewing 100 percent of their rules, the DNR targeted a 37 percent reduction in restrictive words and a 26 percent reduction in total rules, with over 64 percent of rules recommended for amendment or rescission."

In its nine-page report, DNR also said it considered over 300 comments that had been received as part of the study of its regulations.

Among its proposed changes, the department reported: "The Department is rescinding an obsolete and unnecessary rule 'Certain Coals to be Washed.' This rule, which requires washing of coal prior to use, dates back to the 1930s and was intended to regulate the quality of coal burned by consumers to heat their homes. The (federal) Clean Air Act limits emissions from modern coal-burning sources."

DNR also said it was modifying a state rule on open burning requirements "to allow individuals to burn leaves, household waste, etc., without receiving a (state) permit as long as it is not prohibited by local ordinance. The amendments will still prohibit burning of restricted items such as tires, hazardous waste, asbestos containing materials, and trade wastes in order to protect human health and the environment."

The Department of Public Safety reported last year it was working to eliminate "all but one rule regarding horse racing in the state which has not had gambling on horse racing for 30 years."

The one remaining rule involves an annual harness racing day at the Clark County Fair in Northeast Missouri.

And the Division of Alcohol and Tobacco Control eliminated a liquor license restriction that prohibited a person with a felony conviction from taking part in the sale of alcoholic beverages, including work as a convenience store clerk.

The department said: "This restriction not only imposed a hiring burden on liquor license holders, it posed a significant employment hurdle to ex-convicts seeking employment as they sought to rebuild their lives."

The state Department of Revenue said its changes included ending a rule vehicle dealers have a landline phone; and a requirement records be kept on microfilm "because it is obsolete with technological advances (since) neither taxpayers nor the (Revenue) Director use microfilm for document storage."

Revenue also cut two rules involving insurance identification cards, which described the required content of the cards, as well as other ways to provide proof of car insurance.

"These rescissions benefit Missouri citizens by removing the outdated requirement that the operator of a motor vehicle provide a physical (hard) copy of an insurance identification card (or related document) on demand by law enforcement," the department reported. "Now, citizens can simply show an electronic image of the document."